Premier Gladys Berejiklian said there was concern about vaccination rates in the eight local government areas under tighter restrictions in Sydney’s west and south-west.

“It’s really critical to have our communities in those eight local government areas take up the opportunity for vaccination,” she said, noting her 50 per cent vaccination goal to ease restrictions in Greater Sydney on August 29 would mean 6 million shots would need to be administered by the end of the month.

She said the government was “keen to explore” opportunities to encourage vaccination.

The Premier said COVID-19 was continuing to circulate among households and essential workplaces in those areas. “So we urge people, if you must leave the house, assume everybody has the virus,” she said. 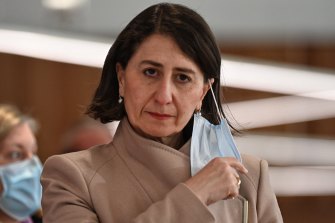 Meanwhile, a 19th resident at Wyoming Summer Hill aged care home tested positive on Tuesday, bringing the total number of infections associated with the facility to 21.

The resident, who is vaccinated, had already been transferred to hospital, along with the 13 other residents on the top floor of the building, where all cases have been detected, who had been testing negative.

The virus was introduced into the facility by an assistant in nursing, contracted by an agency, who worked across three facilities.

On Monday, federal Health Minister Greg Hunt said surge workforces were exempt from requirements that aged care staff only work at a single site. Wyoming’s operator, Hardi Aged Care, said it required permanent staff at its facilities to only work at one site.

A fully-vaccinated staff member at Sydney’s Westmead Hospital has also tested positive to COVID-19 after working for three days while infectious. Thirty-six hospital workers have been identified as close contacts and are in a strict two-week isolation.

A spokesperson for Western Sydney Local Health District said investigations into the source of the infection indicated the worker contracted the virus in the community.

“The affected areas have been deep cleaned and there has been no further transmission associated with this case to date,” the spokesperson said.

“Patient care has not been affected. Our highest priority is always the safety of patients and our staff.”

It is the second healthcare worker at Westmead Hospital to test positive in NSW’s latest outbreak, after a fully vaccinated nurse contracted the virus in July. There was no onward transmission from the case.

New exposure sites announced by NSW Health on Monday evening included Rockdale Repco on Wednesday and Thursday last week, Hai Ha Money Transfer at Cabramatta early on the morning on Sunday, July 25 and The Oaks Hotel at Wollondilly around lunch on Friday.

There were 16 new local cases reported in Queensland on Tuesday, all linked to the the Indooroopilly Delta cluster which has been spreading among local high schools. Eleven local government areas have been locked down until Sunday afternoon.