‘Nobel Prize for sure’: Hunt for dark matter goes underground in Stawell

The biggest mystery in the universe could be solved one kilometre underground in a gold mine in country Victoria where a new laboratory opened on Friday.

Dark matter makes up 85 per cent of the cosmos and binds the universe together, but exactly what it is and how it works remains unknown. 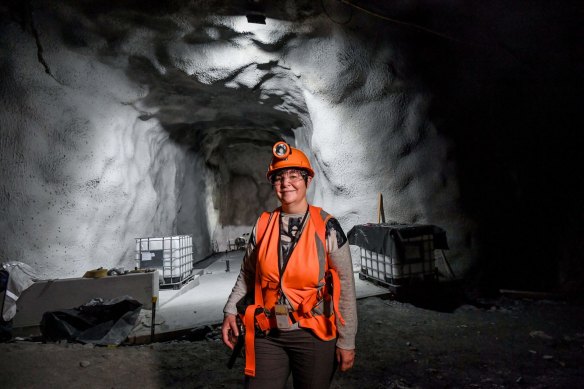 Professor Elisabetta Barberio inside the dark matter lab while it was under-construction last year.Credit:Joe Armao

A new high-tech laboratory at the Stawell Gold Mine hopes to solve the mystery and detect dark matter within five years, allowing scientists to one day unlock its secrets.

RMIT physics lecturer Dr Gail Iles told 3AW that discovering dark matter would be “a Nobel Prize for sure”, if scientists could pull it off.

“[Discovering dark matter] would help our exploration of space. And the detectors we develop would most likely be able to be used in other fields. Probably most likely medical fields,” Iles said.

The Stawell project’s lead researcher, Professor Elisabetta Barberio from the University of Melbourne, said dark matter was common even in Earth’s atmosphere.

“There are many, many thousands of dark matter particles passing through us. So there is all this universe around us [that] we don’t see, and we would like to know what it is.”

In the next few months an eight-metre tall steel box weighing 200 tonnes will be installed at the mine, containing cylindrical crystals and liquid which will be used to carry out the study.

A similar project is also underway at an underground laboratory in northern Italy, to make sure both record accurate results.

“We need to repeat the experiments in the Southern Hemisphere, because we want to eliminate any possibility that the signal is due to noise that has to do with season or has to do with the location where they are,” Barberio said.

Iles also said on 3AW the Stawell project was buried deep in a mine underground to ensure signals, such as radio transmissions, did not interfere with attempts to detect the unknown matter.

“Essentially you’re removing any contamination you might get up on the surface of the Earth. And then it means when you get a signal in your detector, you can be 99.9 per cent sure what you’ve measured is, in fact, dark matter and not anything else,” Iles said.

The Commonwealth and Victorian governments have each put in $5 million towards the $12 million Stawell facility, which will begin major work early next year.

“[It] will attract the eyes of the world to this goldfield town and create local jobs while boosting investment opportunities for the region,” Ms Shing said.