Well, it looks like nothing is going to top Oscar winner Russell Crowe’s Labor campaign launch endorsement of Opposition Leader Anthony Albanese. Rusty stepped into a role once filled by Bill Hunter of spruiking the Labor Party to the masses.

But CBD has found one better. Step forward Josh Burns, the Labor MP for the old federal seat of Melbourne Ports, reborn as Macnamara in 2019. Burns has been enthusiastically endorsed by former Neighbours star and vodka entrepreneur Olympia Valance.

“Josh Burns is the man,” Valance recently told her 211,000 Instagram followers. “He has worked tirelessly in our community advocating for affordable housing, tackling the homelessness crisis and ensuring Australia takes meaningful action on climate change.”

He also stood up for local businesses and workers in the hospo and creative industries, she said. But that wasn’t all.

“I have known Josh and his beautiful family personally for many years and I can guarantee what a supreme legend he is. There is no political ego going on here. He is an incredibly intelligent man who truly cares about every individual in our community. A progressive young politician who has proved over and over again what a great leader he is.”

Valance, who is returning to Neighbours before the final episode airs later this year, ends with a flourish: “Vote 1 Joshy.”

Alas, Valance put the post on Instagram stories, which meant that the message vanished after 24 hours. Vast enthusiasm, but oh so fleeting.

Forget brain fog and Albo’s mental blanks around the national disability insurance scheme. It’s that time in the election cycle when, at the inner sanctum of the campaign trail, the wheels are very close to falling off. Literally.

A busload of journalists on the Liberal Party’s campaign media bus in Perth on Saturday had to be offloaded en masse after a bathroom incident made the vehicle temporarily uninhabitable. Luckily, a new set of wheels was waiting at the next stop along with a stern warning from the bus driver about what the bathroom could be used for. “Number ones only,” apparently.

But it’s not the only curious incident of the campaign trail. 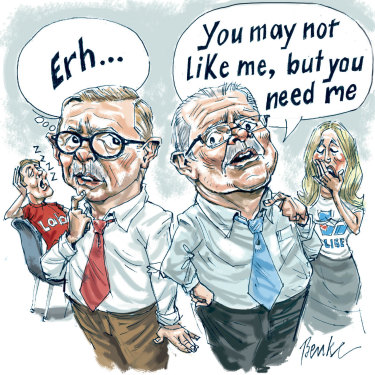 Two nights earlier, the media pack made light work of the plane ride from Sydney to Western Australia, wiling away the five-hour flight with an a cappella marathon of pop’s greatest hits. A mole on the plane – CBD’s political editor and former high school madrigal, Tamara Kingston-Manuka, no less – informed us the press pack performed a fair chunk of the Backstreet Boys’ catalogue before turning to Britney Spears and Aussie pop duo Savage Garden. But it was a rousing rendition of John Farnham’s You’re the Voice they were proudest of.

Apparently, the anthem was sung with such force it threatened to jam flight communications. We suppose the frustration has to come out somewhere.

Over in the Labor camp, things are just as manic. But they’re not that manic, according to a senior Labor figure who emphatically denied reports emanating from the bus of keeping an afternoon nap schedule to keep the politicos’ brains clear for the campaign.

No shade, comrade – we would too if we could!

But it’s Labor’s campaign headquarters in Sydney’s Surry Hills where the real party is happening, which is no surprise, considering their boss has had another beer named after him. Last week, Marrickville brewery Willie the Boatman launched a new ALP-inspired ale, the Albo Pale Ale, in honour of the Grayndler MP. A year earlier, there was another tribute in the form of the Albo Corn Ale.

And while cases of the brew aren’t headed to the campaign HQ – officially it’s a dry ship, but who knows what goes on in a Surry Hills office block’s rear entrance – that hasn’t stopped ALP campaigners from going to town with the beer-related merch. Albo’s campaign team has now manufactured a mountain of striking coasters to accompany the ale, printed in Soviet red, featuring Albo’s mug and the tag line “Vote Albo for PM”. Coasters have been appearing in Surry Hills pubs along Cleveland Street ever since, prompting some head-scratching among publicans who know the coasters haven’t come from them.

Could it be a HQ-led guerilla campaign tactic? Probably, considering Labor spinners went to ground when asked about the coasters on Sunday. 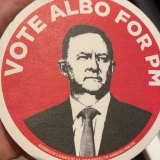 “I found coasters with Albanese’s face on them in my pub. I didn’t ask for them to be there and no one asked me if I wanted them,” he told CBD on the condition of anonymity.

Either way, it’s worth noting the coaster bombing isn’t even going down in Albo’s electorate. Surry Hills belongs to Sydney MP and Labor golden girl Tanya Plibersek. Remember her? We sure do.

Things appear to be marginally more sedate up in Brisbane, where the Coalition’s campaign team has converged on the riverside suburb of Milton, which just happens to be the home of XXXX beer.

But the set-up is all very old-hat for veteran Coalition campaigners considering it’s the third election in a row that the party has chosen the ‘hood for its election nerve centre. Up there, it’s all about the local Anytime Fitness and what we are told is a reliable neighbourhood Japanese restaurant that has established itself as a favourite with the team. Rockin’ sushi indeed. At least there are plenty of choices for knock-off beers. Our pick is the Newstead Brewery or the nearby Regatta Hotel close to the riverfront in Toowoong.

Team, you got those tips for free.