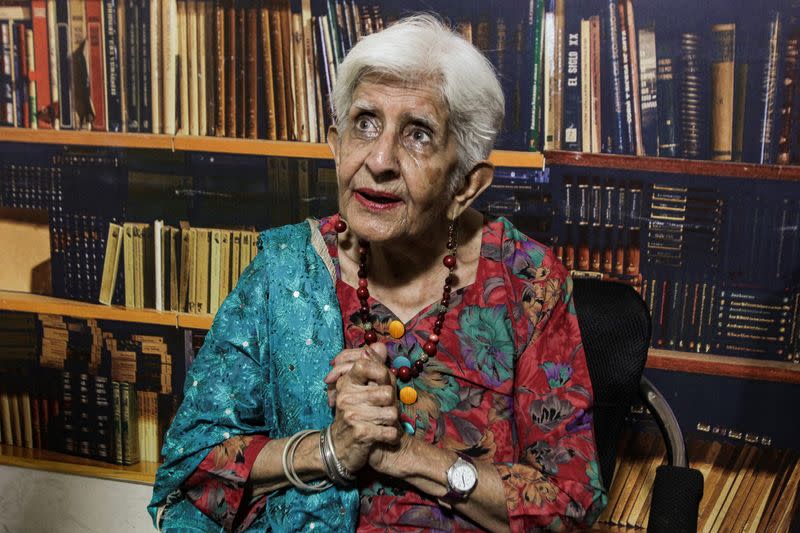 LAHORE (Reuters) – When 92-year old Indian citizen Reena Varma visits her childhood home in Pakistan this week, for the first time in 75 years, she will be the only one of her family to make it back home since they left shortly before partition divided the two nations.

“My dream came true,” she said, adding her sister had died without ever being able to fulfil her wish to return to the home in the city of Rawalpindi they left when Varma was 15 years old.

The family of five siblings fled to the Western Indian state of Pune shortly before partition in August 1947.

Although Varma was able to travel once to the eastern Pakistani city of Lahore as a young woman, she has never been back to Rawalpindi. Her parents and siblings have since died.

Crossing into Pakistan by road last week after decades of attempts to get a visa, she felt a wave of emotion.

“When I crossed the Pakistan-India Border and saw the signs for Pakistan and India, I got sentimental,” she said, speaking during a stop in Lahore. “Now, I cannot predict how I will react when I reach Rawalpindi and see my ancestral home in the street.”

Varma’s family was among the millions of people whose lives were disrupted in 1947, when departing British Indian colonial administrators ordered the creation of two countries – one mostly Muslim and one majority Hindu.

A mass migration followed, marred by violence and bloodshed, as about 15 million Muslims, Hindus and Sikhs, fearing discrimination, swapped countries in a political upheaval that cost more than a million lives.

India and Pakistan have fought three wars since 1947, and relations remain tense, particularly over the disputed Himalayan region of Kashmir, which both claim in full.

Aug. 14 will mark 75 years since partition split the two countries, dividing the province of Punjab roughly down the middle.

Varma remembers those tumultuous days clearly. The family worried as reports of violent incidents reached them and decided to leave, her father quitting his public servant job and Varma leaving her school.

“Initially we could not understand what happened,” she said, adding her mother never wanted to believe that the two countries had been divided.

“She kept saying we will go back to Rawalpindi soon, but ultimately she had to accept the reality that India and Pakistan are two separate countries,” she said.

Varma has been trying since 1965 to get a visa for Pakistan, finally succeeding this year when the Pakistan India Heritage Club and Pakistan’s Minister of State for Foreign Affairs Hina Rabbani Khar helped with the process.

Varma is being hosted by Imran William, the director of the India Pakistan Heritage Club, which works to highlight the shared heritage of citizens on both sides of the border and reunite family members separated by partition.

“India and Pakistan are two separate countries but we can bring peace between them through love and people-to-people contact,” William said.

When Varma, who is Hindu, was leaving India for her trip she said many warned her not to travel to the Muslim-majority country, but she was not deterred.

“Here I feel I am in my own town with my own people,” William said.