Mother, 30, says she is lucky 'to be alive' after thugs stole her car

Mother, 30, says she is ‘fortunate to be alive’ after being dragged down road clinging to the bonnet of her car in front her son, four, in desperate bid to stop it being stolen

A mother has claimed she is lucky to still be alive after she was dragged down a farm road while clinging to the bonnet of her car during a terrifying attack on her home.

Josie Mackay, 30,  admitted she was ‘fortunate to be alive’ after escaping with broken fingers and severe bruising from the ‘harrowing’ ordeal at her Edinburgh home on Sunday evening.

She said she instinctively leapt into action to avoid being run over by her white Nissan Qashqai, which was in the process of being stolen by a pair of thugs who appeared to have unlocked it using keyless technology.

The gymnastics instructor then explained how a panicked getaway driver accelerated down the country lane, with Ms Mackay pinned on the bonnet, before slamming on the brakes and sending her hurtling through the air.

She was then rushed to hospital for treatment. Her young son, Leo, was unharmed despite witnessing the terrifying ordeal from mere feet away.

Ms Mackay admits: ‘For the injuries that I got, I’m very lucky.

‘I’ve got severe bruising, severe whiplash. I can barely move my neck. I have blood blistering round my chest area, my ankle and my elbow are swollen up.’ 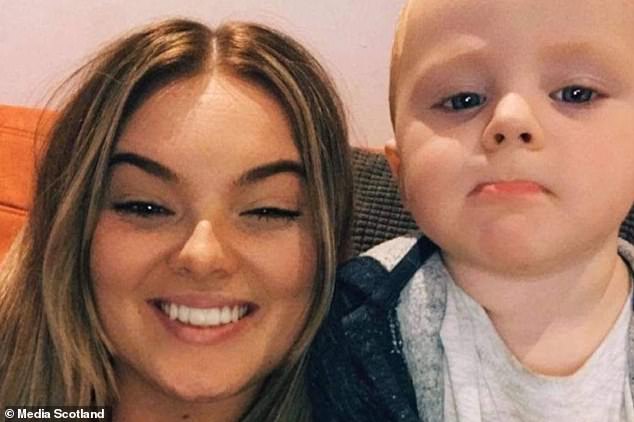 Josie Mackay, 30, admitted she was ‘fortunate to be alive’ after escaping with broken fingers and severe bruising from the ‘harrowing’ ordeal at her Edinburgh home on Sunday evening 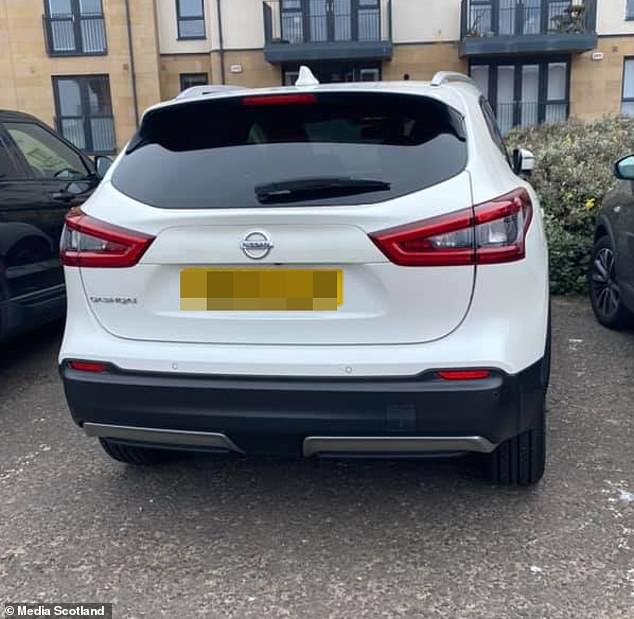 She said she instinctively leapt into action to avoid being run over by her white Nissan Qashqai (pictured), which was in the process of being stolen by a pair of thugs who appeared to have unlocked it using keyless technology

Ms Mackay said she noticed two men in a white BMW circling the house when she was taking the bins out earlier that afternoon.

She said she walked out her house later that evening and discovered two guys inside her Nissan – so started hitting the body of the car and screaming at the top of her lungs.

‘It must have given them a fright because the guy in the passenger side ran and jumped into a parked BMW, but the man in the driver’s seat managed to get the engine started,’ she said.

‘I was grabbing the bonnet at the top of the hill and he just pinned me to it and started driving at full speed as I was skidding along on the front grill.

‘He slammed the brakes on and I just went flying over the front. I hit the ground really hard, bruised almost my entire body, broke my fingers, but even after that, the adrenaline was obviously rushing and I stood up as quickly as I could.’

Josie added: ‘He just came driving right for me, but luckily I was able to jump into a bush, that was all that I could do.

‘They sped off but I had to run back and make sure Leo was ok and thankfully, he was. I just had to grab him and run inside.’

Medics treated Josie for a catalogue of injuries including severe bruising, a thumb fracture and lacerations to her head and chest.

But the mother said she continues to feel the emotional impact of the incident and has experienced violent night terrors.

‘I’m constantly on edge. It must have been a good ten metres I was on the front of the car and my feet were on the ground,’ she explained.

‘But if I had let go, I would have gone right underneath. Everything was telling me don’t let go, I was just pushing my weight against it.

‘After I had been at the hospital to get a higher dose of pain medication. I was having really bad night terrors. I kept thinking I was hearing people in my house.

‘When my boyfriend came in to check on me while I was in my bed and when he touched me, I got such a fright that I turned round and I almost punched him. It was just a nervous reaction.’ 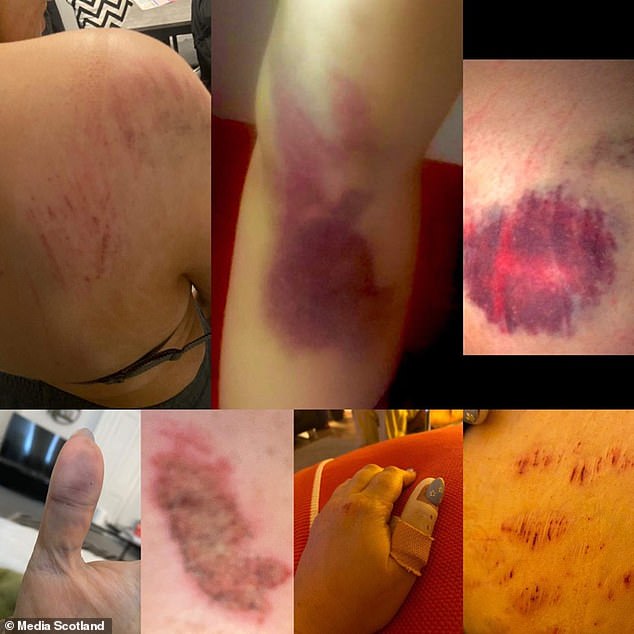 CCTV footage from outside the family home captured the two men suspected of the attack circling in a white BMW prior to carrying out the theft.

One appears to be carrying an electronic device, which police believe is being used to remotely unlock vehicles through high-tech software which can bypass keyless entry.

Josie has urged other car owners to be vigilant of similar targeted thefts after witnessing the duo scoping out the scene in the hours before the incident.

She said: ‘It is all professional, it’s not just your average car thief doing this. They are targeting specific cars.

‘This was premeditated, we have them on CCTV going past earlier in the day. They definitely passed at around 5pm when I was putting the bins out.

‘They were possibly getting the details. They are going about not having to break into anybody’s houses, whatever equipment they have, they have devices that are able to unblock these new cars.’

The family has attempted to shield Leo from the incident, but Josie admits the youngster is aware of what happened and has started asking questions about the men who carried out the attack.

She added that not being able to explain why she had been singled out was ‘killing her inside’ as she urged anyone with information to come forward and share it with police.

‘When the driver drove right at me, that’s not just stealing a car. He was adamant, it was a panic because I had seen their faces and I would be able to identify them,’ she said. 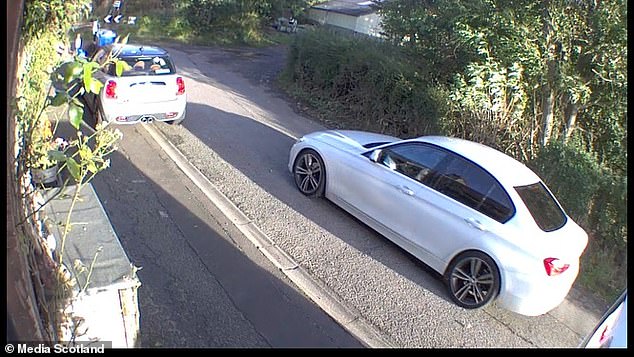 Ms Mackay said she noticed two men in a white BMW (pictured above) circling the house when she was taking the bins out earlier that afternoon.

‘You start thinking, was he trying to take me out of the game? It’s one of those things I keep running through my head.

Josie added: ‘I’m in pain, I have broken fingers, but the thing that mattered most to me was that my son was standing there watching all of this.

‘Leo, even now, we’re trying to take his mind off it but he keeps coming up to me and cuddling me or kissing my arm; he’s asking about “the bad men” and if they are going to jail, so he knows.

‘When he’s asking, I’m really trying not to cry in front of him, but it kills me inside.’

A Police Scotland spokesperson said: ‘We received a report of a stolen car from Shawfair Cottages, Dalkeith, around 7.25pm on Sunday, 10 October.

‘A white Nissan Qashqai was stolen. A white BMW car is believed to have been involved in the incident.

‘Enquiries are ongoing and anyone with any information should contact Police Scotland on 101 quoting incident number 3048 of 10 October.’