More than 40 flights have been cancelled at Sydney Airport due to poor weather conditions, creating chaos for hundreds of travellers who were hoping to take advantage of the public holiday.

Air traffic controllers on Wednesday night warned airlines the airport could be forced to reduce to single runway operations on Thursday after strong winds of almost 40 km/h were forecast.

As a result, multiple airlines chose to cancel services ahead of the poor weather forecast to prevent thousands of travellers arriving to potentially cancelled flights at Sydney Airport on Thursday.

“In anticipation of bad weather today, domestic airlines advised overnight that some services would be affected,” the airport said in a statement.

“Passengers are advised to check with their airline regarding the status of their flight. Passengers who are travelling today are recommended to arrive 2 hours prior to domestic flight departures, and 3 hours for international services.”

On Thursday morning, Sydney Airport spokesman Josh Clements told Sydney radio station 2GB the airport had not yet been forced to move to single operations, but flights were still being cancelled in anticipation. 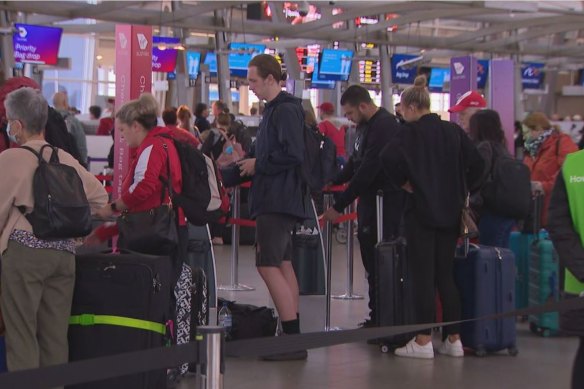 The airport is now expecting Friday to be even busier than predicted as Sydneysiders make their way to Melbourne to see the Swans in the AFL grand final.Credit:Nine News

“The alternative was to run the gauntlet and have those passengers show up,” he said. “If we did go to single runways there would have been lots of disrupted passengers in the terminals today.”

Multiple passengers said they were unaware their flight at been cancelled until attempting to check in at the airport, Nine News reported.

The cancellations hurt some more than others due to the fact many were planning to utilise Thursday’s Queen’s memorial public holiday to begin their school holiday travels.

“I know [the airlines] are working hard to rebook those affected passengers onto different services,” Clements said, adding that more than 2.4 million passengers were expected to travel across the school holiday peak times.

He said Friday was now expected to be busier than already anticipated as AFL fans look to travel to Melbourne for the grand final.

“We know tomorrow is going to be a busy day,” he said. “The best advice for people is to get in touch with their airline regarding the status of their flight and, if they’re flying domestically, make sure they get into the airport with two hours ahead of the departure of their flight.”