This is the terrifying moment an 11-year-old girl was almost flung from her horse after it got spooked by a speeding car.

Daschcam footage shows a silver BMW with screeching breaks fly past a pair of riders before crashing into another car up ahead.

The near-miss collision occurred on a country lane in Wanborough, Wiltshire.

Izzy Wykeham-Martin was out for a leisurely ride on eight-year-old gelding Sully, being led by her sister Niahm.

Niahm’s partner and construction worker Matthew Lane, 23, was following the pair behind in his car.

Several cars are seen slowing down to pass them respectfully, when suddenly the sound of screeching tyres can be heard in the background.

Sully is spooked at the sound and starts to panic before the car, a silver BMW, flies past, narrowly missing the horse and two girls.

The terrified horse tries to bolt with Izzy clinging on, but Niamh managed to keep hold and calms him down. 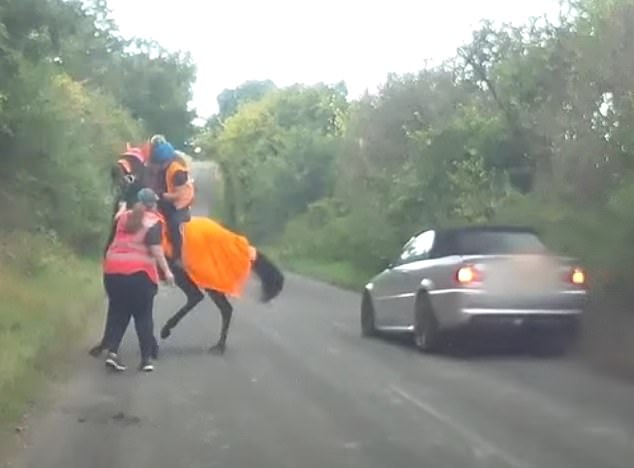 Izzy Wykeham-Martin, 11, was riding her horse Sully down a country lane in Wanborough, Wiltshire when the animal suddenly became spooked by the sound of a BMW screeching past at speed

The driver appears to almost lose control riding up a verge to avoid the pair, before eventually colliding with a third vehicle further ahead.

Matthew then drives on to stop the other driver after Sully had calmed down.

‘I looked back and all I could see was the silver BMW hurtling towards me with smoke bellowing from the tyres,’ said Matthew.

‘The other driver didn’t seem to be bothered by what happened. The driver must have been travelling at least 80 miles per hour. 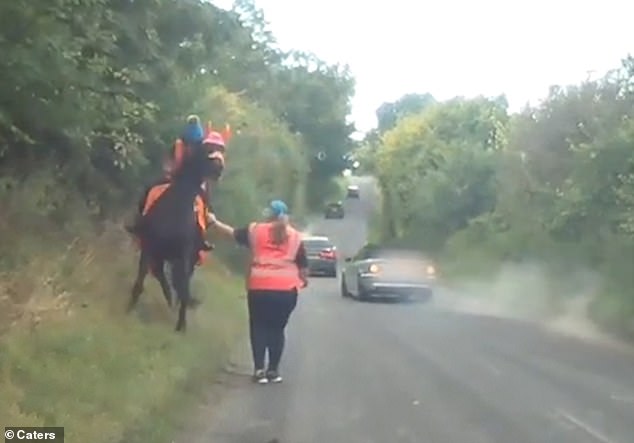 ‘Both Niamh and Izzy were very emotional immediately after the event. Luckily no one was hurt, just very shaken up.

‘Izzy is now very nervous about hacking but was happy with how Sully behaved during the incident.’

How to safely pass a horse

On seeing a horse on the road, motorists are advised to slow down to 15mph and be prepared to stop.

Heed a riders or carriage drivers signal if they ask you to stop or slow down.

If the horse show signs of nervousness as you get closer, you are best to stop and turn your engine off to allow them to pass.

You should not start your engine or move again until the horse is well clear of your vehicle.

If you need to get past, it is best to avoid revving your engine and keeping a low speed as horses can be spooked by loud sounds.

Drivers are asked to be patient. Most equestrian riders will do their best to reassure their horses and allow you to pass as soon as safe to do so.

The safest place for the rider’s hands is on the reins, so they may only be able to nod their thanks to you.

Matthew added that more needed to be done to protect not just horseriders, but pedestrians and cyclists that also use country roads.

‘I was behind the horse, about eight cars in a row had gone past it sensibly, then there was this tyre squealing and all I could see was smoke.It looked like an F1 car was behind me,’ he said.

The Highway Code tells motorists to ‘always pass wide and slowly’ when encountering horses, as many can be unpredictable and tend to have children as riders.

Wiltshire Police launched an investigation into the incident.

In a statement the force said: ‘We are aware of the incident which occurred on Wanborough Road at approximately 6pm (22/09) after it was reported to us later the same day.

‘We are investigating the incident and will keep those involved updated as the investigation progresses.

‘We’d like to take this opportunity to remind people that country roads and lanes have a high proportion of slow-moving traffic, including animals.

‘We all need to share the highways and have respect for each other. This means thinking about those who might be more vulnerable than you and altering your speed accordingly.’

According to the British Horse Society, more than 1,000 road incidents involving horses were reported in the year to February.

Around 43 per cent of the incidents occurred because the vehicle driver went past too quickly.