Education is a social necessity, a fundamental right for children, and also the ground for passionate, lively and occasionally heated debate. As it should be. This was certainly true when The Age this week brought together some of the most influential and enlightened voices at its annual Schools Summit. The point was to open up a marketplace of ideas about education, in the belief that transparent public discourse on important issues is an essential good. 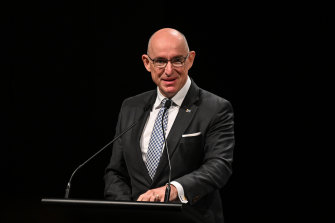 A couple of issues attracted intense debate. One was kicked off by comments last week from acting federal Education Minister Stuart Robert, who told a forum of independent schools that “dud teachers” could in part be blamed for the decline in the academic results of Australian students. Cutting the bottom 10 per cent of teachers from the system would lift education standards, he said. He did not back down when quizzed at The Age summit, saying he wanted to start a discussion about quality, and was happy to have done so. But Victoria’s Education Minister James Merlino hit back: “We’ve had this revolving door of [federal] education ministers, each one was worse than the one before.”

Mr Roberts made his “dud teachers” remark just days after releasing a report into how to attract more high-quality candidates into teaching. One way to raise the profession’s status, the report argued, was to celebrate the positives of teaching and debunk negative myths.

Marcia Devlin, the chief executive of the new Victorian Academy of Teaching and Leadership, said in reference to the minister’s remarks she was “a bit tired of the teacher bashing”. One effect of teacher-bashing, Dr Devlin said, was to reduce teachers’ status in the public eye, which in turn made it more difficult to attract and retain them. Victoria needs 5000 new graduate teachers annually.

The teacher shortage would ultimately become a principal shortage, Mark Grant, chief executive of the Australian Institute for Teaching and School Leadership, told the summit. Being a school principal today, with competing demands and pressures, was so difficult that teachers were not applying for the role. Then there are the ongoing debates about a national curriculum, the culture war over history and a robust debate about when, and how, to push mathematical concepts.

Another key issue raised at the summit was the lingering effects of the pandemic. University High School principal Ciar Foster said that after two years of disruptions, her year 11 students were struggling to knuckle down to VCE. And Gitaanjali Nair, a year 12 student who is also on the Victorian Student Representative Council, told the summit that students were still grappling with the loss of many of the extracurricular activities that make up school life, and many were finding their resilience was lower.

“School is an experience. It’s about debates, it’s about sports, it’s about meeting your friends, it’s about gossiping on the oval and there are all of these little things that we didn’t realise were such integral parts of our school experience that we only learnt to love once it was gone,” she said.

And what would a debate on education be without an airing of the “reading wars”. A panel passionately discussed the competing benefits of phonics versus “balanced literacy” in Victorian schools. Literacy consultant Diane Snowball questioned why Victoria, which is leading the nation in literacy according to NAPLAN, is talking about adopting more phonics in line with other states such as NSW.

Flowing in and out of the summit was the question of quality, and Australia’s decline in the international rankings. Everyone is engaged by it. The issues are thorny and multifaceted. The need to address them is urgent. But one thing seems certain: they will not be solved by something as simplistic as targeting allegedly “dud” teachers.