The McGowan government is on the hunt for a new 100-bed homeless facility in Perth’s CBD after it was revealed it didn’t actually have a lease for the Wellington Street hostel selected for the project.

With the election campaign roaring back to life, WA Labor announced on Sunday it would spend $14.3 million on turning the YHA Perth hostel into a transitional and crisis accommodation facility for the homeless. 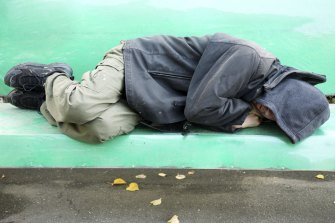 The facility would have housed 100 people in crisis accommodation.

But CBRE agent Ryan McGinnity, who is acting on behalf of the hostel’s owner YHA Australia, confirmed they were actually in negotiations to sell the facility to another party.

“From recent correspondence, we understand the government is interested in pursuing a lease for homeless accommodation as a priority in the City of Perth,” he said.

“Given the property’s potential suitability, we will pass on any interest to the seller and buyer who together can consider all options. We won’t be providing further comment on the sales process.”

Mr McGowan said his cabinet was presented with an opportunity to lease the facility if they were prepared to put in $14.3 million to refurbish it, which was approved at the last cabinet meeting on February 1.

“So that was what was brought to us by the agency, obviously the owners of the hostel have sought other people to sell it to and so it looks like that opportunity of that specific facility has been missed,” he said.

Mr McGowan said he was “not happy” with the bungle, partially blaming the COVID lockdown, but the money was still available for a similar facility and the government were actively looking for new sites.

“We had a week last week that was probably the most stressful week in the state in many years, for a whole range of reasons, and clearly over the course of that week the negotiations weren’t finalised or weren’t activated in the way that they should have been,” he said.

“But we have the money and we will ensure that we use it for homeless purposes in the future as soon as we can. We’re reviewing what’s available out there.

“It’s not an election commitment. It’s in the budget and we’ll look for other opportunities that are out there.”

Know more about this story? Send us a tip here.