A man has died after a cliff face collapsed on top of beachgoers at a popular Great Ocean Road surfing spot on New Year’s Eve. 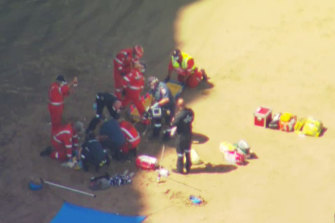 A man and a woman in their late twenties received non-life-threatening injuries and were taken to Geelong hospital by ambulance.

A 28-year-old man was winched out of the rubble by air ambulance with serious upper-body injuries but died before arriving at the Alfred Hospital, police said in a statement.

The other three beachgoers were unharmed.

Images captured by Nine News show large rocks sitting amid what appears to be the personal belongings of the group at the site of the collapse.