Lockdown frustrations not over, but there is hope

It has been a long time coming, but finally restrictions are beginning to ease. This is not before time. Victorians could be forgiven for feeling some iso-fatigue. The changes that kicked in on Monday may be limited, but for children returning to playgrounds and those living on their own getting a chance to socialise, they must be a very welcome reprieve.

Experience tells us there will be temptation to test the limits of what is allowed. A sunny day often brings out the crowds. Many people will be desperate to physically reconnect with family and friends. As the time in lockdown has dragged from weeks to months, frustration has grown. 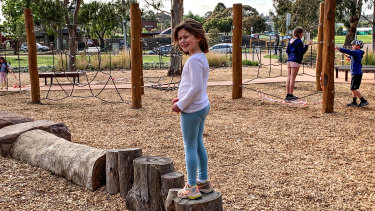 Children were finally allowed to use playgrounds again as of Monday. Credit:Hanna Mills Turbet

While there were very vocal and, at times, aggressive anti-lockdown protests over the weekend, when you weigh these up against the severity of the restrictions, particularly in Melbourne, it should not be surprising that certain people are ready to blow off steam. The Age does not condone the actions of those confronting police but accepts that discontent will surface.

Police have an enormous task on their hands. They would do well to offer some leniency as we come out of lockdown, as they did when we entered it. Each time the rules are changed it will take a while for people to learn to navigate their new boundaries. Police issued more than half a million dollars' worth of fines on Sunday to individuals breaching restrictions, with many handed out to protesters. That is not a good outcome for anyone.

There is reason for genuine hope, however. Just over five weeks ago, the second wave peaked with 725 positive cases in a single day. With the seven-day average above 500, and the death toll mounting, it was a grim time. And yet, for all the concerns over contact tracing, and rampant outbreaks in aged care homes and public housing, the virus has been in a slow but steady retreat. The collective effort of so many is once again flattening the curve.

It appears highly likely that regional Victoria will soon move to its next stage of easing. With no restrictions on staying home, open air dining allowed, students returning to school, and up to 10 people allowed to gather in public, this will give Melburnians a glimpse of what should lie ahead.

While still some way behind, Melbourne is on track to reach its next stage of easing on September 28. The target of the 14-day average needing to fall below 50 will probably be reached soon, but Premier Daniel Andrews is adamant that Melbourne will not be easing up early. With about 1000 Victorians still infected with the virus, there is need for caution.

Mr Andrews often repeats his road map mantra of a "safe and steady" path out of lockdown. But it should be acknowledged that with some weeks to go before reaching a COVID-19 "normal" in Melbourne, frustration will continue to bubble away. There will be times when people lash out, or overstep the line. That will hopefully be tempered by Victoria's new trajectory towards a less confined life.

We should never forget how far beyond our normal lived experience this year has been. It has tested, and will continue to test, each and every one of us. But hopefully the slow road we must travel to put the worst behind us will not be one we need to tread again.

Our weekly newsletter will deliver expert analysis of the race to the White House from our US correspondent Matthew Knott. Sign up for The Sydney Morning Herald‘s newsletter here, The Age‘s here, Brisbane Times‘ here and WAtoday‘s here.