Lisa and John have seen wet years before, but nothing like this

Lisa Minogue and her husband John spent hundreds of thousands of dollars getting their canola and wheat crops into the ground this year, but she has written off any chance of getting them out again.

Their farm at Barmedman, south-east of West Wyalong, has already received almost twice its average annual rainfall. Minogue expects the annual rain record, set in 1956, will fall any day now. 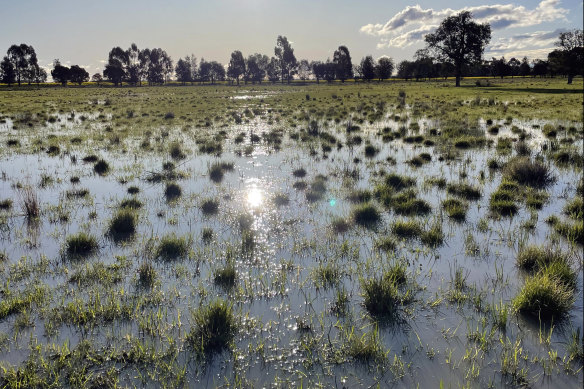 Flooding at the Minogue property in Barmedman, near West Wyalong.Credit:Lisa Minogue

“We’ve had wet years before, but we’ve never not got a crop in. John’s father was the same. This is by far the worst,” she said. The couple bought the farm from John’s parents 28 years ago.

“It’s quite depressing, quite traumatic, to get up every day and know that whatever you do it’s going to be hard work. It’s hard work wading through water and mud. It’s hard on the machinery, hard on the livestock. Everything is so much harder when it’s this wet. 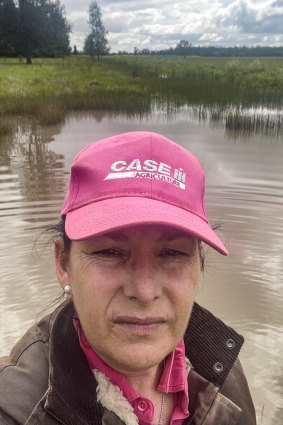 Lisa Minogue inspects flooding on her property at Barmedman, in western NSW.Credit:Lisa Minogue

“We’re farmers, we always live in hope that we’ll harvest something from it, but even if we do get a crop through to harvest, the issue will be, how do we get our machinery – our big heavy machinery – on the paddocks without getting bogged? Last year was a terrible year for getting bogged. This year, I just can’t imagine how it’s going to happen.”

The latest rain and flooding that has hit NSW and Victoria has left 20 million tonnes of Australian grain exposed to the elements, according to industry body Grain Growers, that is a third of the national crop. It fears that even if the crops survive the weather and can be harvested, badly damaged roads will stop them getting to market.

Chairman Brett Hosking said farmers were still in emergency mode and had not yet had a chance to assess the damage, but he expected at least 5 per cent of the national harvest had been destroyed.

“We’ve seen massive amounts of rain,” he said. “The water is lying in the paddock for too long and it is effectively starving the roots of oxygen. It’s drowning the plant by its feet.”

Winter crops including wheat, barley, canola and oats were affected, as well as fava beans, lentils and chickpeas.

The Australian Bureau of Agricultural and Resource Economics and Sciences, which provides quarterly forecasts on Australia’s agricultural production and exports, predicted in September an almost record winter harvest. But it said on Tuesday that is next forecast, due in December, would be revised in light of the flooding.

The weather would likely affect the December food inflation figures and may result in prices rising into the new year, instead of peaking at the end of this year. 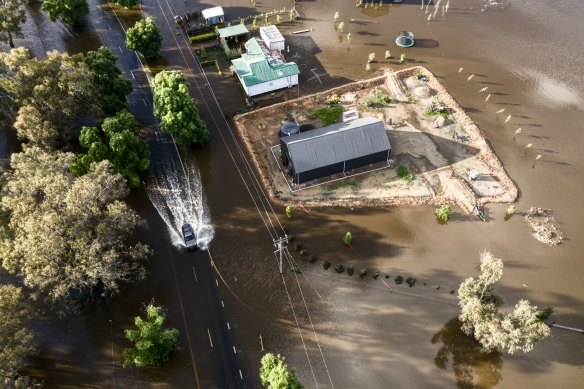 Federal Agriculture Minister Murray Watt said the government was working with the states to work out what help could be offered to farmers and primary producers.

“It’s not just about the damage to crops, it’s also the impact on farmers’ ability to harvest when their machinery gets bogged, and their ability to get products to market, given the extensive damage to road networks.”

Minogue said many roads near her farm were closed to heavy vehicles, making it impossible for her and her husband to do things like move cattle.

“For those that do and will have a harvest, the state of our roads is just unbelievable,” she said. “We’re on gravel roads that have been impacted by water constantly. When you have to go to town, you almost have to psych yourself up to tackle the roads. Potholes would be a luxury.”