Victorian Liberal spokeswoman for housing Wendy Lovell’s comments this week that public housing should not be built “in the best street in Brighton” have provoked a furore. Her claim that “the children cannot mix with others” is especially alarming when you consider her oversight of the redevelopment of inner-city public housing estates, which builds private residences on public land.

As housing minister in the Napthine government, Lovell told Parliament in 2013: “There is a great program going on [at the Carlton housing estate] that will improve the demographic of that estate. When it was just purely a housing estate there was more than 90 per cent unemployment on that estate … It did not give those children something to strive for – something to aspire to in the future. If we mix demographics, we decrease the concentration of disadvantage.” 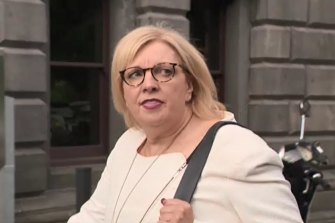 Liberal MP Wendy Lovell arrives at Parliament the day after her comments about public housing in Brighton.Credit:Nine News

The public housing redevelopment program, supported by Coalition and Labor governments, is premised on the displacement of public tenants. They are moved off-site – often to the outer suburbs – while their old public units are demolished and new ones built with funds from the sale of new private units. The promise is always that they can come back once works are complete, but even if there are enough replacement dwellings (which there were not at Kensington) they are often too small for larger (usually African and Muslim) families, or the first move was already so disruptive, they rarely do. Only 20 per cent of the former tenant households returned Kensington and Carlton estate redevelopments.

This is doubly unfortunate when you consider how well the inner-city estates are resourced with public transport, schools, pools, libraries and other social services. These are now the province of the new private residents and the public residents lucky enough to return. Meanwhile, the social impacts and costs of the low-income households relegated to public housing in poorer-serviced suburbs remain undocumented. The option of being relocated to public housing in well-serviced wealthy suburbs is of course unlikely, even more so if the Coalition has its way.

Certainly, the concept of social mix is complicated. Abdullahi lived on the Carlton estate, and conducted research at Melbourne University about its redevelopment, titling the resulting paper Why do we need social mix? He found social networks are far more likely to develop along cultural, ethnic or religious lines than across public and private housing tenures, and that the benefits to public tenants of living in close proximity to private owners are dubious at best.

Indeed, he found that some of the overwhelmingly white, middle-class private residents on the redeveloped estate were hostile to the young black basketballers who liked to play in the evening. Middle-class people are notorious for organising in their own interests, particularly when it comes to area improvements, and they succeeded in the efforts for the court lights to be turned off earlier.

A substantial body of work from the UK shows that opposition to the public housing estate redevelopments there was often due to the breaking up of strong working-class communities. The “revitalisation without displacement” program I have researched in Vancouver’s Downtown Eastside – a notorious red light and drug district – replaced rundown rooming houses with an upmarket, mixed-housing shopping complex. The former rooming house tenants sleep there but first thing in the morning race past the new middle-class residents and their fancy boutique supermarket to get to the shrinking stretch of street where their friends hang out.

So Wendy Lovell may have inadvertently made quite a good point. Not all poor people want to mix with rich people. The missing element, however, is that it should be their choice, and it should also be their choice to stay put if they want to. There should be enough public housing everywhere for low-income people to have a say in the neighbourhood in which they live – just as wealthy people do. Instead, the fate of mostly non-white low-income people in Australia is determined by others, whether they like it or not.

Dr Kate Shaw is an urban geographer at the University of Melbourne.

Abdullahi Jama is an urban planner.