MINNEAPOLIS – Former Minnesota Police Officer Kim Potter will stand trial in the same courtroom – and in front of some of the same faces – as ex-Minneapolis Police Officer Derek Chauvin, who was convicted earlier this year in the death of George Floyd.

Chauvin stood trial for weeks and was ultimately convicted in April 2021 – including on the same day that Potter allegedly mistook her handgun for her Taser when she fatally shot 20-year-old Daunte Wright just 10 miles away in the Minneapolis suburb of Brooklyn Center. There was little mention of Chauvin or Floyd’s death, which sparked outrage over police brutality in the U.S. The court has seemed determined at times not to bring it up.

As of the opening statements, which are set to begin on Wednesday, reminders of the previous case ranged from the questions the jurors were asked during the selection process about their fears of delivering an unpopular verdict, to even the presence of some of the same prosecutors who successfully tried Chauvin.

Potter, 49, is charged with first- and second-degree manslaughter for fatally shooting Daunte Wright, a Black man, during a traffic stop.

Minnesota’s sentencing guidelines call for a sentence of just over seven years on the first-degree manslaughter count and four years on the second-degree one. Prosecutors have said they would seek a longer sentence.

Hennepin County Judge Regina Chu is using the same 18th-floor courtroom where Chauvin was convicted of murder in April by a jury that repeatedly watched video of the White officer kneeling on the neck of Floyd, a Black man, and where Chauvin was later sentenced by Judge Peter Cahill to 22 1/2 years.

Potter, who was a police officer for 26 years, resigned from the Brooklyn Center Police Department two days after the April 11 shooting and has argued that she meant to use her Taser – but grabbed her gun instead – after Wright tried to drive away from the police while they were arresting him.

The shooting was caught of body camera video – which will be showcased during trial – in which Potter can be heard yelling “I’ll tase you!” and “Taser! Taser! Taser!” before firing her handgun.

She then can be heard saying, “I grabbed the wrong (expletive) gun,” followed by: “Holy (expletive), I just shot him.”

Just as with Chauvin, Potter’s trial is being livestreamed, a rarity in Minnesota that is partly a concession to high public interest and partly due to pandemic considerations. The courtroom has clear plastic dividers that are strategically placed.

People who tune in will see several of the same faces who successfully prosecuted Chauvin, too: Assistant Attorneys General Matthew Frank and Erin Eldridge sit at the prosecution table, with their boss Keith Ellison frequently in the courtroom.

Early on, although Floyd’s death was rarely mentioned directly during jury selection, his case’s impact on the trial has been obvious. The jury pool got nearly the same questionnaires used for Chauvin’s trial, with only slight edits in some places to fit the circumstances of the Potter case. It doesn’t mention either Chauvin or Floyd by name.

Prosecutors and the defense sifted their answers carefully and probed deeper in court. People with moderate views were more likely to be seated, like a man who said he opposed cutting police funding but also said: “I absolutely believe there’s a need for change.”

Some potential jurors were asked by the defense if they had any concern about blowback if they were to acquit Potter. The only Black person to make it onto the jury, a woman in her 30s, said that “is not a concern for me.” 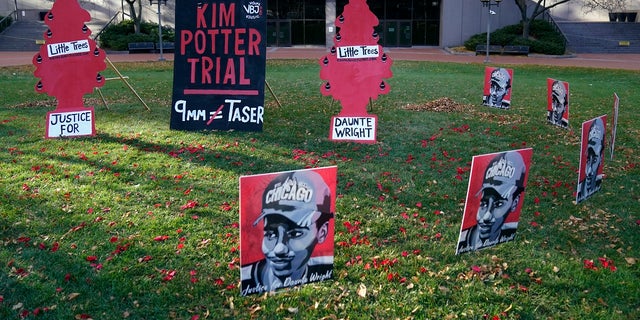 Posters stand on the south lawn Tuesday, Nov. 30, 2021, at the Hennepin County Government Center in Minneapolis where jury selection begins for former suburban Minneapolis police officer Kim Potter, who says she meant to grab her Taser instead of her handgun when she shot and killed motorist Daunte Wright. (AP Photo/Jim Mone)
(AP Photo/Jim Mone)

One of the few direct mentions of Floyd came from a woman who said his case “caused a lot of trauma in our city,” and it made her sad. She said she did not like the negative attention it brought Minneapolis, but said a positive result of protests is that important issues are being discussed.

She made the jury as an alternate.

Security is heightened for the trial, with several entrances to the courthouse closed off. But the tall chain-link fences, razor wire and concrete barriers put in place for Chauvin are gone, as are the National Guard soldiers and armored vehicles that patrolled the area this spring. And the building is open to the public.