Potomac, Maryland: US President Joe Biden said he is worried that Russian President Vladimir Putin does not have a way out of the Ukraine war, and Biden said he was trying to figure out what to do about that.

Biden, speaking at a political fundraiser in a Washington suburb on Monday, Washington time, said Putin had mistakenly believed the invasion of Ukraine would break up NATO and break up the European Union. 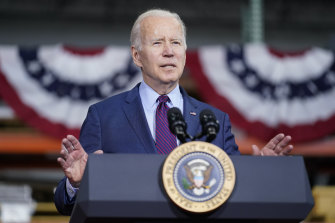 US President Joe Biden worries Russian President Vladimir Putin has no way to back out of invasion of Ukraine.Credit:AP

Instead, the United States and many European countries have rallied to Ukraine’s side.

Russia’s assault on Kyiv was beaten back in March by strong Ukrainian resistance. Russia poured more troops into Ukraine for a huge offensive last month in the eastern part of the country but its gains have been slow.

Biden said Putin is a very calculating man and the problem he worries about now is that the Russian leader “doesn’t have a way out right now, and I’m trying to figure out what we do about that”.

The signing comes as the US Congress is poised to unleash billions more to fight the war against Russia — with Democrats preparing $US40 billion ($57 billion) in military and humanitarian aid, larger than the $US33 billion package Biden has requested.

It all serves as a rejoinder to Russian President Vladimir Putin, who has seized on Victory in Europe Day (or VE Day)— the anniversary of Germany’s unconditional surrender in 1945 and also Russia’s biggest patriotic holiday — to rally his people behind the invasion.

“This aid has been critical to Ukraine’s success on the battlefield,” Biden said in a statement.

Biden said it was urgent that Congress approves the next Ukraine assistance package to avoid any interruption in military supplies being sent to help fight the war, with a crucial deadline coming in 10 days.

“We cannot allow our shipments of assistance to stop while we await further Congressional action,” he said. He urged Congress to act — and “to do so quickly.”

Protesters threw what appeared to be red paint, to symbolise blood, at the Russian ambassador as he arrived at a cemetery in Warsaw to pay respects to Red Army soldiers who died during World War II.

Ambassador Ambassador Sergey Andreev came to the Soviet soldiers cemetery to lay flowers. A group of activists opposed to Russia’s war in Ukraine were waiting for him. 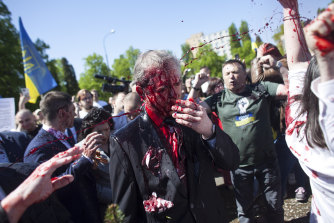 The protesters carried Ukrainian flags, while some were dressed in white sheets smeared with a red colour, symbolising the Ukrainian victims of Russia’s war.

Other men in the diplomat’s entourage were also seen splattered with what appeared to be red paint.

Meanwhile, in Ukraine, the Ukrainian military said Russian forces fired seven missiles from the air at Odesa on Monday night, hitting a shopping centre and a warehouse.

One person was killed and five were wounded, the military said.

Photos on the post showed what appeared to be the warehouse engulfed in flames.