Amid the heady smell of gently decaying blooms, warm horses, buffed leather tack and early autumn, there is great industry in the flower garden at London’s Green Park.

Piles of damp Paddington Bears and soggy stuffed corgis are being sorted and saved by volunteers in purple vests. Crates of cards — many crumpled and stained by rain — are carefully preserved. A tree, festooned with cub scout ties, is quietly harvested.

Deflated balloons are gathered and Union Flags are untied from branches and neatly folded.

Along one fence is a great stretch of pot plants. By another, candles, candleholders and wreaths.

‘There were all sorts of weird and wonderful things left — entire books made by school children, framed photographs, complicated collages, jars of marmalade, marmalade sandwiches, some melons even . . .’ says Bryony Cross, volunteer and programmes manager for Royal Parks. 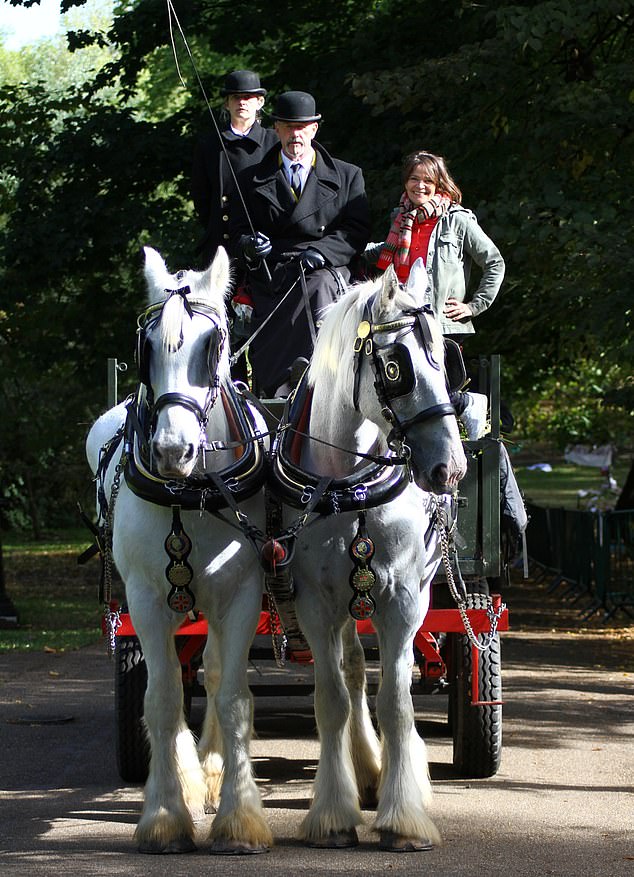 The horses might look as if they’re on parade, but they’re here to work. To transport load after load of the dead and dying flowers nearly two miles, through Green Park, under Wellington Arch through Hyde Park towards the vast royal compost heap

Her team is undertaking a huge sort out of the millions of flowers, cards and gifts brought in memory of the Queen and carefully laid in great swirling, now yellowing, loops in Green Park for visitors to see.

The cards — so deeply personal, from all around the world — leap out. One, blurred with rainwater and in a child’s script, reads: ‘I miss you — you’ll probably be the only Queen in my life, love from Hannah.’

Another, in a plastic bag, says: ‘To the Queen’s family, sorry for the loss of your mummy and grandma, love Ollie, aged 7, Leo, aged five, and Oscar, aged two.’

Even after everything we’ve seen in recent weeks — the processions, queues, lying-in-state, the funeral — the sight and smell of hundreds of thousands of gently rotting bouquets is surprisingly moving. Peaceful, calm, but very poignant.

Not least, because standing quietly by, a tonne apiece, are Heath, 17, and Nobby, 14 — immaculately groomed grey shire horses, measuring 18-and-a-half hands, adorned with royal medals, harnessed to a smart, bottle-green flat-bottomed dray and tended by a trio of grooms in bowler hats and heavy black-buttoned greatcoats. 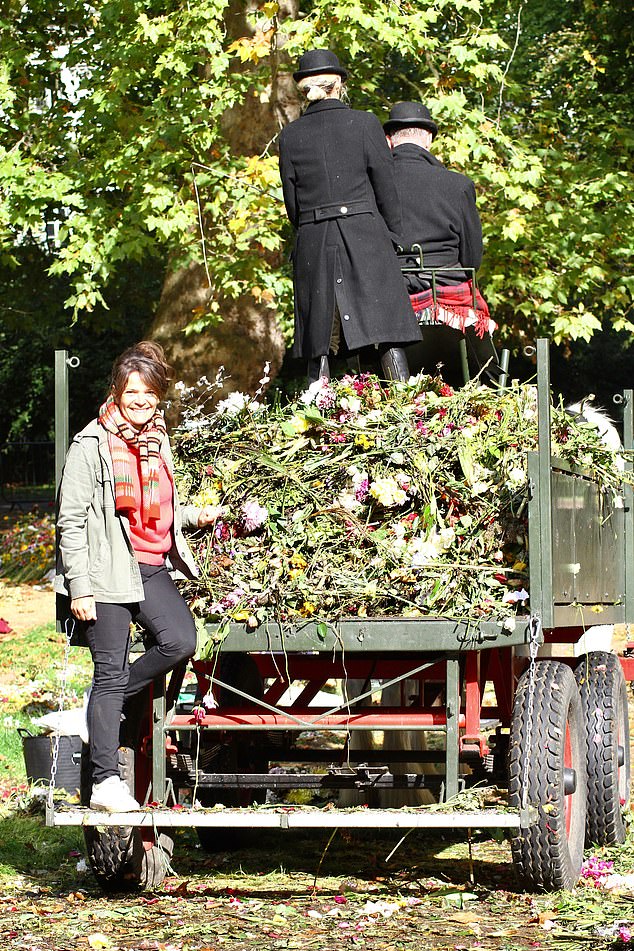 Shire purchase: Jane Fryer with Heath and Nobby as they heave floral tributes to the royal compost heap

The horses might look as if they’re on parade, but they’re here to work. To transport load after load of the dead and dying flowers nearly two miles, through Green Park, under Wellington Arch (where the Queen’s funeral procession stopped before making its final journey to Windsor Castle) through Hyde Park towards the vast royal compost heap where the floral tributes will be mulched.

And there couldn’t be two better steeds for the job. As Edward McDowell, the head coachman, puts it: ‘It’s an honour and a privilege — of course we all jumped at the chance. But it’s particularly right for them, they’re paying their respects.’

Heath and Nobby had a special relationship with the Queen, which started when she was watching TV in Windsor Castle and saw them on the Channel 5 series Hampton Court: Behind Closed Doors.

‘She spotted them, showed the clip to her yard manager and said to him, ‘I want those two for the Jubilee parade,’ explains Edward, 69. 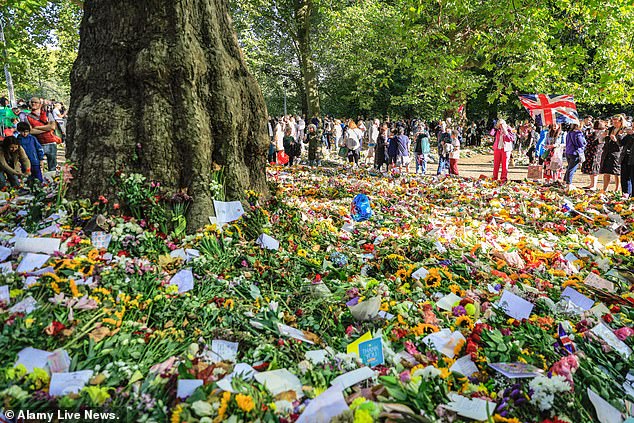 Outpouring of love: Just some of the bouquets, cards and handmade tributes left in memory of the Queen in Green Park

The Queen certainly knew her stuff. Grey shire horses are desperately rare. Today there are just 1,500 shire brood mares in the world.

A hundred years ago, there were a million shires in England alone. And the greys are the rarest. ‘If they get any rarer, the gene pool will be too small to breed them,’ says Edward.

So naturally these two beauties, owned by the brilliant Operation Centaur, which specialises in using heavy, working horses in the community, were transported to Windsor Castle where they were kept outside the Queen’s apartment.

‘When they arrived, she came and inspected them and said she couldn’t wait to see them all plaited up for the show,’ says Edward. ‘Once she popped down to see them and fed them some carrots. She knew these were really special.’

As everyone will say who’s worked with them, shires — which can haul three tonnes with ease — are special.

‘You work with them as colleagues; they don’t work for you. They can be quite grumpy, but I think they’re more sensitive to us.’ 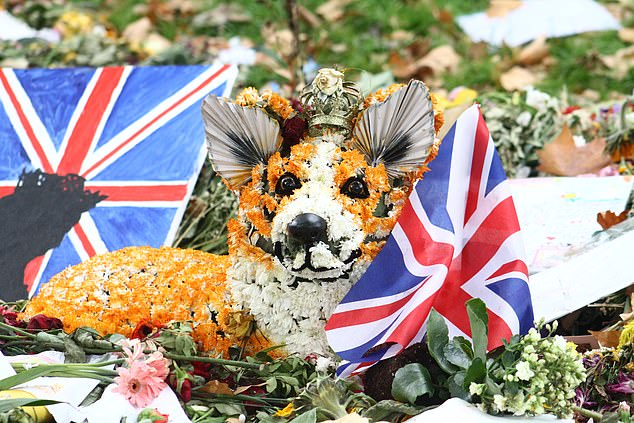 Here, as they wait patiently for the next load, it is the volunteers, many working double shifts, who are hard at it.

Painstakingly removing all elastic bands and ties from the flowers and piling them up. Gathering the cuddly toys into plastic crates, carefully extracting the notes, cards, drawings of Paddington and the corgis — all ready to be dried out in temperature-controlled rooms in the parks’ nursery then stored (though where is yet to be determined).

‘Every bit of paper, every little note — we’re trying to save as much as possible,’ says Bryony Cross. ‘Nothing will be thrown away. But it’s incredibly slow, careful work.’ Luckily, there are plenty of volunteers, all surprised by the scale of the job and all here for different reasons.

Some just want to say thank you. Others, such as Pauline, missed the funeral and the procession and wanted to do something to commemorate the Queen.

Aarti wanted to do something constructive to help. ‘It’s an honour and a privilege to be here.’ For Fiona, it was more about closure. ‘It’s helping me realise it’s real and it has really happened,’ she says. ‘It’s very moving reading all the little messages.’

She’s quite right. The next one I pick up is a carefully laminated photograph of a group, all in wheelchairs, with the message: ‘Thank you for being our inspiration, Ma’am.’ 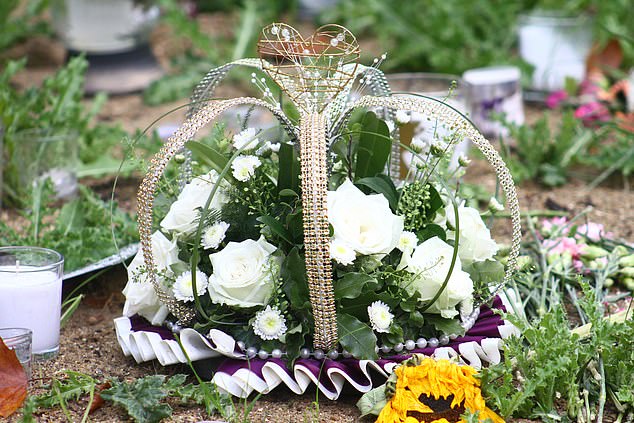 Volunteers have been painstakingly removing all elastic bands and ties from the flowers and piling them up. Gathering the cuddly toys into plastic crates, carefully extracting the notes, cards, drawings of Paddington and the corgis. Tributes pictured on September 16

Next to it, and signed simply ‘Your subject’, is a card that reads: ‘Thank you for welcoming me to your kingdom and providing comfort and stability to my family during challenging times.’

Deeper in the pile, next to a teeny homemade throne and still attached to some dead irises, one reads ‘You were the GREAT in Britain.’ There are even two framed tributes from the people of Norfolk Island — a tiny community between Australia and New Zealand. We continue to chat as they work and, when the dray is loaded, I travel with Nobby, Heath and Co to the royal compost heap.

‘The whole thing’s quite ceremonial, isn’t it? And very environmentally friendly,’ says Edward, as we head off. ‘I think she’d have liked it. It’s just respectful, really.’

It’s also strangely magical. The peaceful clip-clop of the horses walking in lockstep. Their warm, earthy smell mixed with the scent of so many dying flowers. 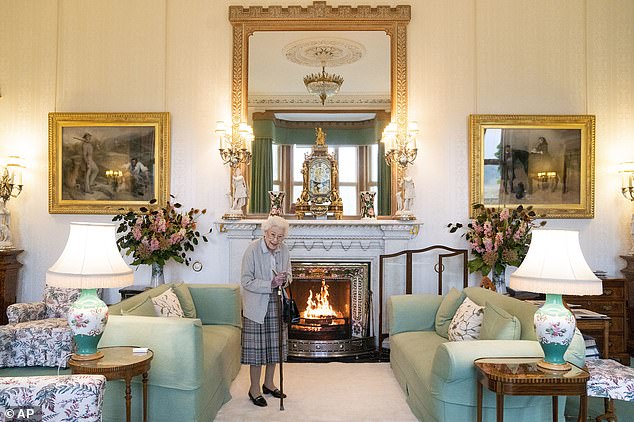 The joggers and commuters who stop to take photos or just stand quietly as we make our way across Hyde Park Corner, through Wellington Arch and into Hyde Park.

And the gentle chat with Edward, Tom Nixon, 57, and Lizzie White, the coachmen and woman, who have spent all their working years with horses, and couldn’t be happier with their lot.

Or more impressed by the Queen’s extraordinary knowledge of horses and her bond with her favourite fell pony, Emma, who watched the funeral procession go by in Windsor with one of her majesty’s silk headscarves draped across her saddle. ‘Until not that long ago, she was riding every day. And she’d visit Emma a lot in the stables,’ says Edward.

‘She was originally one of the Duke’s driving horses and I don’t think he was too happy about the fact that the Queen nabbed her. But I think she wanted something a bit lower to the ground and a bit safer.’

Maybe because she never wore a hat, just a headscarf? ‘It isn’t against the law not to wear a hat,’ says Edward carefully. ‘But I think that was probably because of her. I bet they change the law now . . .’

In Hyde Park, dog walkers stand still as we pass. Some say thank you. A couple appear to be saying prayers. One old boy leaps off a park bench and salutes. 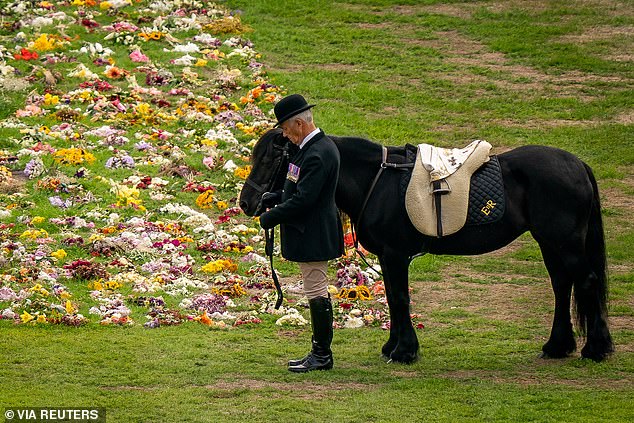 The Queen had an extraordinary knowledge of horses and bond with her favourite fell pony, Emma, who watched the funeral procession go by in Windsor with one of her majesty’s silk headscarves draped across her saddle 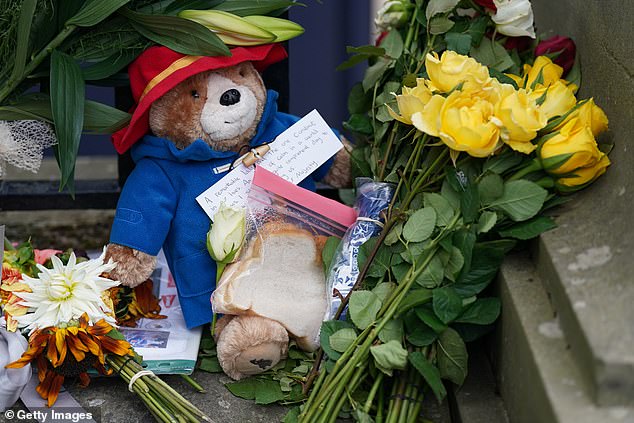 And when we finally get there, oh my! The royal compost heap — or leaf pen — would set any gardener’s heart racing with its huge, steaming mountains of hot compost and a yard awash with tractors and diggers.

Here, the tonnes of wilted flowers will be turned to mulch which, according to Andrew Williams, park manager at Kensington Gardens, will help nurture the parks’ soils for the next 500 years. New life from old.

On the way back, the dray is empty but for a scattering of rose petals. The horses seem springier, particularly as we cross Hyde Park Corner where they can sense the trains rumbling deep beneath.

Today they’ll do another three or four loads, before heading back to Hampton Court Palace for a couple of days off before they’re back to work ploughing and logging and rolling bracken. ‘It’s an honour for us all to be here,’ says Tom, quietly. 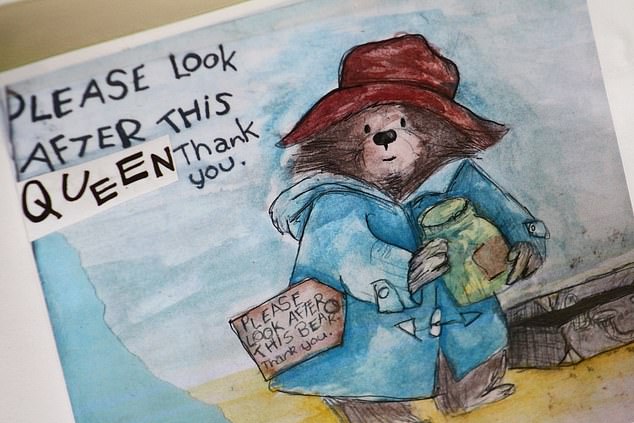 Volunteers are working quietly, peacefully and often tearfully in the thin autumn sunshine in honour of the memory of our dear late Queen

I couldn’t agree more. The whole thing is extraordinary.

Because, of course, they could simply have shovelled all the decaying flowers into a couple of massive recycling trucks and be done with it. It would have been much quicker. And probably an awful lot cheaper.

But, instead, we have this wonderful, quiet ceremony amongst nature. These beautiful working horses, buffed and groomed and gleaming, paying their final respects.

Tom, perched high on his tartan rug with the reins. Lizzie in hairnet and bowler. Joggers who stop in their tracks in respect as we pass.

And volunteers, working quietly, peacefully and often tearfully in the thin autumn sunshine in honour of the memory of our dear late Queen.