Wellington: As Josh Frydenburg considers a temporary cut in fuel excise, he can find an unlikely ally across the Tasman.

Despite leading a government that is rhetorically well to the left of Australia’s on climate, Kiwi Prime Minister Jacinda Ardern announced a similar temporary cut last week, shaving 25 New Zealand cents off the excise tax charged on every litre of petrol for the next three months.

The change was made as petrol hit a NZ$3 a litre (worth $2.80 in Australian money) and Ardern digested some of her worst polling since coming to Government. The ruling Labour Party was behind the opposition National Party in the last TV poll, registering just 37 per cent support – its lowest level since being elected in 2017. Ardern’s own popularity is also starting to wane, as newish opposition leader Christopher Luxon finds his feet, although he is still behind. 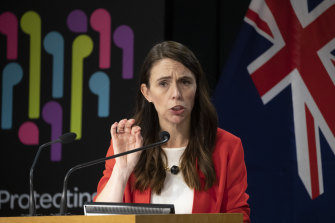 The cut in the excise was a significant pivot from Ardern, who had spent the weeks prior pointing out that the inflation, particularly in fuel prices, wasn’t the Government’s fault. She’s right, but that doesn’t mean voters won’t punish them for it.

Ardern is being reminded that incumbency can be as much a curse as a blessing. This is a lesson the South Australian Liberals have just learnt too. It’s quite a flip on 2020 and 2021, when incumbency was a huge boon: Governments dominated the airwaves as they fought an alien virus, while oppositions scrambled to find oxygen.

Some were lucky enough to have elections in the midst of this. Ardern won an absolute majority of the vote in 2020, something no one had done in New Zealand since 1951. Now in 2022 that advantage seems to have slid away, as high inflation and Omicron waves combine to punish incumbents.

But Ardern’s absolute majority also gives her the ability to respond with far more agility than would be possible in a coalition. Her traditional allies in the Green Party can mutter darkly about subsidising petrol but they can’t actually stop her.

The irony is that high petrol prices would be an extremely effective way to bring down carbon emissions, a stated goal of the Ardern government. That’s why a fair whack of the taxes currently collected on each litre of petrol goes to our emissions trading scheme – there is supposed to be a price signal encouraging people to get out of cars and switch to public transport or an electric vehicle.

That proposition is supposed to be gradual – but $3 a litre is not gradual. While upper-middle class city dwellers can decide to walk, buy a Tesla or just pay more for petrol, poorer people in provinces and exurbs of New Zealand lack much of an alternative to driving. So Ardern has to hold her nose and subsidise fossil fuels.

It’s representative of a wider bind Labour is in: how to transition an economy away from carbon without imposing massive costs on people who can’t afford them? This can be an exploitable vulnerability come election time. But it is not necessarily intractable. 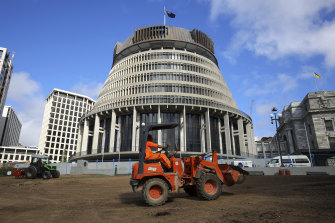 The grounds of New Zealand’s Wellington Parliament have to be repaired after the 23-day occupation by anti-COVID-mandate protesters. Credit:Getty

Ardern looked to protect her left flank when making the announcement by simultaneously halving public transport fares for the same time period. She hinted that this was just the start, as the Government has a whopping NZ$4.5b “climate emergency fund” to spend in the May budget.

But populist climate policy isn’t easy. Not everyone wants to catch a bus or ride an e-bike, even if it is free. Subsidised insulation and heat pumps deliver only temporary benefits to a working class that largely rents instead of owning. The benefits of subsidised forestry generally go to a small group of landowners. In a world of high unemployment, you could talk up all the jobs new green infrastructure might provide – but New Zealand has a record low unemployment rate right now.

Some on the right have their own populist climate idea: the carbon dividend. (This hasn’t been rejected out of hand by Ardern either.) It has the virtue of simplicity: Instead of the government deciding how to spend all the money generated by our emissions trading scheme, it would simply pay the money out to every family, with the total coming to around $NZ1000 a year. This could be used by families to deal with all the costs that higher carbon prices might bring, all while embedding widespread support for carbon prices.

Whatever climate action Ardern decides on in her May budget, it is likely to be drowned out by concerns about inflation and the cost of living. But it could be worse. She could be facing an election this year.