‘It is fairly dire’: Only 2 per cent of Great Barrier Reef still unbleached

The future of the Great Barrier Reef hangs in the balance as global warming continues to affect the coral’s ability to recover, with only 2 per cent of the entire reef escaping bleaching in the past 30 years.

A new report by James Cook University finds this history of bleaching changes how the affected areas of coral respond to extreme heat. Those that have not been bleached before, or for a long time, were more vulnerable to the effects of bleaching than others.

“Five bouts of mass bleaching since 1998 have turned the Great Barrier Reef into a checkerboard of reefs with very different recent histories, ranging from 2 per cent of reefs that have escaped bleaching altogether, to 80 per cent that have now bleached severely at least once since 2016,” said lead author Professor Terry Hughes, from the ARC Centre of Excellence for Coral Reef Studies at James Cook University. 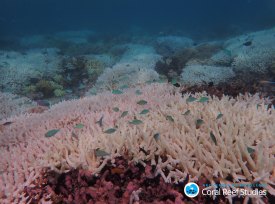 These bleaching events cannot be examined on their own but need to be considered alongside their bleaching history to indicate the likelihood of recovery, the report finds.

Professor Hughes said coral that was first to recover after bleaching was also most likely to be impacted in extreme heat events.

“The recovery driven by heat-sensitive coral is similar to the recovery in a forest after a fire. The most flammable grasses come back faster, which can push the transition of the area from fire-resistant forest to a fire-prone grassland,” he said.

Climate change has also affected the reproductive abilities of bleached corals, with larval supply declining 71 per cent between 2016 and 2020, according to a new report by the University of Queensland, also released on Friday.

Researcher Mandy Cheung said while work was being done on how to protect the reef, more ambitious actions were needed to reduce greenhouse emissions, reduce ocean temperatures and improve larval supply.

“If we lose corals and don’t have coral larval, that means that we might not see a recovery in these parts of the Great Barrier Reef,” she said.

Australia Institute of Marine Science Research Program director Britta Schaffelke said while it was difficult to predict what the reef might look like in the future, there was no doubt further bleaching events would continue to alter it.

“The windows of reef recovery will be shorter and they will not be that frequent,” she said. “The reef will look different to what we are used to … It is fairly dire.”

But Dr Schaffelke remained hopeful that by minimising the impacts of climate change and encouraging strong marine conservation and ongoing research into restoration efforts, there was hope the reef could survive.

“We are trying to save what we can and not reach the point of no return,” she said. “If you look at the Great Barrier Reef, there is still a lot we can work with. We are bracing ourselves for the next big event, which will undoubtedly happen … but there is hope.”

“Where the reef ends up depends on how much warmer it gets. If we stabilise at 1.5 degrees, which is unlikely, the reef might be OK. Two degrees will be a big stretch [for the reef], and warming between 3 and 4 degrees will be incredibly damaging. The reef will not be recognisable as a coral ecosystem.”

“I am actually at the more optimistic end of the spectrum. While we are not going to see the Great Barrier Reef like it was 20 years ago, we can still have a reef if countries can reduce greenhouse gas emissions in the next decade.”

Get weekday updates on the climate summit that will shape our future. Sign up to our COP26 newsletter here.