Is David Miliband about to make a Commons comeback?

Is David Miliband about to make a Commons comeback? Ex-Cabinet minister refuses to rule out standing for Labour at 2024 election (and surprise surprise, he wants to ‘align’ with the EU)

David Miliband has hinted at a shock Commons comeback as polls show Labour on track to return to power.

The former foreign secretary – who fled the UK to run an aid agency in New York after failing to become leader in 2010 – repeatedly refused to rule out standing to become an MP at the next election.

Mr Miliband said he was ‘enthusiastic’ about the direction Keir Starmer was taking, saying pointedly that questions over his Parliamentary options had ‘not been decided yet’.

In an interview on LBC, he also gave a glimpse of his intentions if he does resume duties on the political front line, arguing that it is ‘essential’ for the UK to follow EU regulations.

Pressed about strong rumours in Westminster about his ambitions, Mr Miliband said it was ‘nice’ that people anticipated his return.

Challenged by Andrew Marr that he would definitely be back in Parliament at the next election, Mr Miliband said: ‘That’s not been decided yet. That’s not done.’ 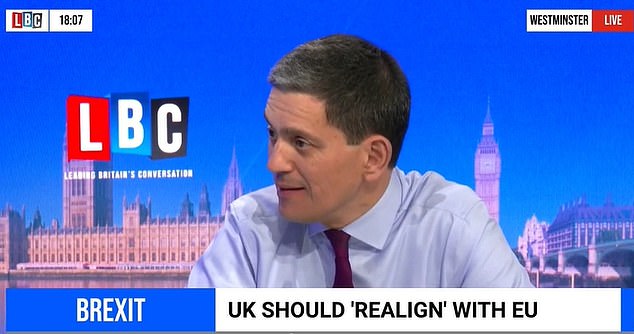 He said: ‘I’m not even going to go there because I’ve got to do justice to the people who are working for the International Rescue Committee…

‘It means a lot to me that job, and I’m very committed to it.

‘The Labour Party is thank God put itself into a position where it’s got good people leading it. It’s got developing its plans for government. That’s something that I think is really essential for the country that I really care about.’

Mr Miliband said: ‘If you start thinking about your next job, you get yourself into trouble.’

The ex-Cabinet minister – who served at the top of government under Tony Blair and Gordon Brown but lost to brother Ed in the 2010 leadership contest – said it was ‘screamingly obvious’ the UK needs coser trading ties with the EU.

He said Britain has ‘shredded our reputation’ over recent years, but suggested that Sir Keir is being careful on the Brexit issue to avoid being ‘cornered by his political opponents’.

Asked whether the UK should pursue a Swiss-style relationship with the EU – something that Rishi Sunak has ruled out after a wave of speculation – Mr Miliband said: ‘You’ve got Switzerland, you’ve got Norway….

‘We’re not going to be a member of the EU, but aligning with EU standards given that it is our largest export market makes common sense.’

He added: ‘The argument against that is we don’t want to be a rule taker. Well point one, we actually wrote a lot of the rules when we were in the EU – those rules are still alive today.

‘Two, the Brexiteers have shown no ability – literally zero – to find one area where they can have regulatory divergence… 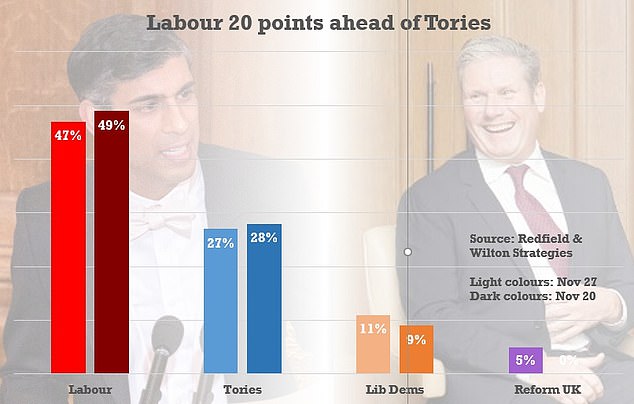 ‘I’m saying alignment on trade is something that is essential for our businesses.’

However, Mr Miliband indicated that a return to free movement was not an option.

‘I think that ship has sailed. The problem with free movement is the way in which it gets maligned… It conjured up a world which actually wasn’t allowed by the rules themselves.’

The manoeuvring came as a poll showed Labour 20 points ahead – enough for a landslide at the next election.

The latest Redfield & Wilton research put Keir Starmer’s party on 47 per cent, with the Tories on 27 per cent.