A heroic Amazon delivery driver jumped into action to save a 19-year-old woman and her dog as they were being attacked by a larger dog in Las Vegas.

“She could have easily stayed back, she saw how aggressive the dog was, but came flying in to help without a thought of her own well-being,” homeowner Michael Ray said in a Facebook post linking to footage of the scene that was captured on a Ring security camera.

The incident happened on Dec. 13, when Ray’s daughter Lauren went outside and greeted a stray dog that was near the family’s front door. Lauren’s 9-year-old cocker spaniel named Max also exited the house.

The bigger dog, a pit bull, immediately went after Max, prompting Lauren to scoop him up and yell at the other dog.

“My Ring alert went off and I watched the entire situation unfold in front of me,” Ray, who was at work during the attack, said on Facebook.

The Amazon employee, identified as Stephanie Lontz, ran to Lauren’s side and yelled at the pit bull to get away.

“Bad dog,” Lontz said as Lauren runs into the house with Max.

“You’re a bad dog,” Lontz tells the dog as he backs away from the house. Ray called Lontz’s reprimanding of the dog “classic.”

The Rays tracked Lontz down and gave her a bouquet of flowers and thanked her for stepping in to help Lauren and Max.

“I didn’t have enough time to say thank you. I was just shaken up but I’m so glad I got to see you again and it means a lot to me,” Lauren told Lontz. 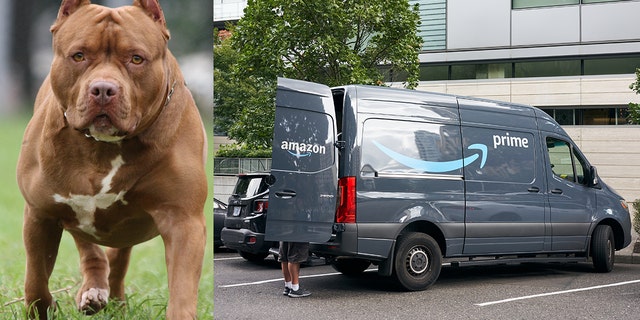 “The screams made me think of my own child,” Lontz told KVVU. “I would only hope someone would jump in and help her if she was in a similar situation. I wouldn’t even think it’s motherly — it’s just the human thing to do.”

Lontz added that delivery drivers often see wild, and sometimes dangerous, situations while on the job.

“Two days prior I had been bit by a dog, two days before that I had saved a baby that wasn’t even 2 years old get locked in a house,” she recounted. “I mean, we really go through a lot, and we’re there when other people aren’t, and sometimes it’s not even recognized.”

“I have a co-worker who put out a fire the other day. It’s just we’re really there when sometimes nobody’s there,” Lontz added.

An Amazon representative said that the company appreciates Lontz’s “service to Amazon and really to your community” and that they watched the Ring footage and it “was something that I’ve never seen before.”