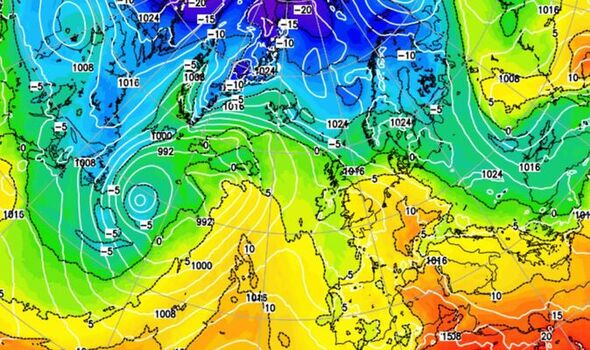 Temperatures could hit 20C as soon as Monday as southerly gusts sweep around high pressure in a carbon copy of the March mini heatwave.

Despite rainy outbreaks across western and northern regions, a ‘pleasant’ spell of weather awaits.

Jim Dale, meteorologist for British Weather Services, said: “We could see highs in the mid- to high-teens or even higher in the sunshine and if everything plays out as it is looking currently.

“It is fair to say that it is going to be a pleasant week to come.”

However, it will follow another chilly weekend with the risk of rain, frosts and even some snow over the highlands.

Met Office meteorologist Aidan McGivern said: “Temperatures will still be below average on Saturday although it looks like a dry and bright day with decent spells of sunshine for many places.

“There are still some showers for Scotland and then a widespread frost on Sunday morning with temperatures in towns and cities at zero or below in the countryside.

“Low pressure is slowly progressing from the west bringing some rain in on Sunday, and this is most likely north-west of the UK, western Scotland western England and north Wales.

“But change is afoot, warmer weather is on the way for the start of next week.”

An ‘erratic’ jet stream will bring bouts of rain at the start of the week with the potential for further showers at Easter.

Cold air will remain over northern Britain with snow possible as it meets milder winds from the Atlantic.

Mr McGivern added: “Cold air remains in the far north with the potential for snow if that rain mixes with cold air as it approaches from the west.

“The jet stream will move erratically cross the UK during the start to the middle of next week bringing showers or longer spells of rain especially across western parts of the country.

“But with a southerly air flow on Monday it is certainly going to feel warmer, if we get some brightness intthe southeast temperatures could top out at 20C, mid-teens elsewhere.”

Met Office meteorologist Dan Stroud added: “At the moment we are in Arctic maritime air, and we are looking at some pretty low temperatures at the start of the weekend.

“But it is all change as we go into Monday, with a wind direction to bring tropical maritime air.”

Low pressure barging in from the Atlantic threatens to dampen spirits on Monday and Friday with the risk of heavy showers.

But as temperatures prepare to soar, forecasters hint at an Easter roaster on the cards for some.

Jim Dale, meteorologist for British Weather Services, said: “There are two weather systems which threaten some rain next week, one at the start and one at the end of the week.

“However, temperatures look like they are picking up on Monday and this should be the trend into Easter.”

Warm weather comes with a warning for hay-fever sufferers with tree pollen levels predicted to soar next week.

Airborne allergens expert Max Wiseberg said: “The start of the tree pollen season has been slow, with the poor weather so far most of this spring, but it looks as if the season could start in earnest with high pollen counts forecast across the south and east of England on Monday.

“If one remedy doesn’t help, try it with others.

“You can create a bespoke hay fever first aid kit that suits your specific needs.”

North-eastern Britain will be slower to lose the cold with bitter winds clinging on across the region.

Warmer air from the south is likely to have spread across the UK by the start of the Easter Bank Holiday.

Weathertrending meteorologist John Hammond said: “After some crisp days and frosty nights this weekend, it’s a gradually warmer trajectory through the new week.

“Atlantic weather fronts will erratically edge in from the southwest, bringing higher temperatures, but also some showery outbreaks of rain.

“Chilly easterly winds could well linger across some north-eastern parts of the UK until later in the week.

“It probably won’t be until Good Friday that balmier air will have reached all of the UK.”