Harris reaffirms pivot to Indo-Pacific as US exits Afghanistan

Singapore: Vice-President Kamala Harris has moved to reaffirm the United States’ commitment to allies in the Indo-Pacific after the fall of Kabul, saying events in south-east Asia “will largely dictate the future of the world”.

The withdrawal of the US from Afghanistan and the chaotic scenes following the Taliban takeover have prompted new questions about US foreign policy and the dependability of the Western superpower as a security guarantor for like-minded nations around the world. 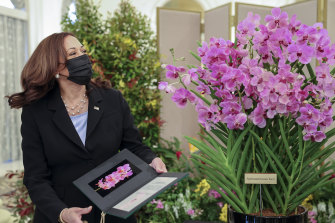 Kamala Harris had an orchid named in her honour during her visit to Singapore’s presidential palace on Monday.Credit:Reuters

Nowhere is that issue more pressing than in south-east Asia and Taiwan as a rising China poses a threat to regional and global stability.

Harris, however, said in Singapore on Monday the Biden administration’s exit from Afghanistan was no reflection of the role it intended to play in the contested Indo-Pacific.

“The reason I am here is because the United States is a global leader,” she said during a press conference at Singapore’s presidential palace before addressing American sailors aboard the USS Tulsa at Changi Naval Base.

“And we take that role seriously, understanding that we have many interests and priorities around the world. I’m here in Singapore as a reaffirmation of our commitment to our membership in the Indo-Pacific region [and] our long-standing partnerships with south-east Asia. 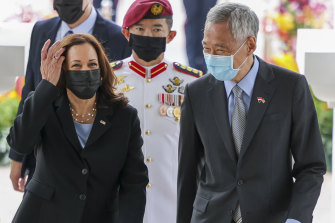 Harris is welcomed by Singapore’s Prime Minister Lee Hsien Loong at the Istana, the presidential palace, on Monday.Credit:Reuters

“As we move forward and think about where we go in the 21st century, south-east Asia and the Indo-Pacific will, in large part I believe, dictate the future of our world.”

In her first visit in office to the region, Harris is also flying to Vietnam on Tuesday, a stop on her itinerary that has raised eyebrows because of comparisons made between the US departure from Afghanistan and the fall of Saigon in 1975.

Asked what went wrong with the US withdrawal after 20 years, she said “there will be and should be a robust analysis of what has happened” but it would have to wait. 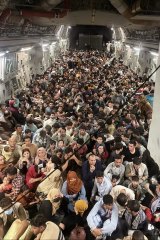 Afghan citizens are evacuated by the US Air Force from Hamid Karzai International Airport in Kabul.Credit:Capt. Chris Herbert via AP

“The President has, I think, shown great emotion in expressing sadness about some of the images we have seen [in Kabul],” she said. “But we cannot be in any way distracted what must be our primary mission right now, which is evacuating people from that region who deserve to be evacuated.“

The Taliban’s return to power has also led to fears about more terrorism threats, including in Indonesia, the world’s largest Muslim-majority nation.

On Monday a police bomb squad in Jakarta detonated a package believed to be a small bomb, resulting in nails being scattered around the explosion site. A witness saw three men throw a package into the bin in the morning and then heard a ticking sound, according to reports.

After meeting with Harris, Singapore Prime Minister Lee Hsien Loong said he hoped Afghanistan did not become an epicentre for terrorists again and that the US would remain a “benign and constructive influence” in the region.

“I told the Vice-President that we understand President Biden’s reasons for his decision [to leave Afghanistan],” Lee said.

“The US intervention has stopped terrorist groups from using Afghanistan as a safe base for 20 years. For this, Singapore is grateful.

“What matters is how the US re-positions itself in the Asia-Pacific, engages the broader region and continues the fight against terrorism because that will determine the perceptions of the countries of the US’s global priorities and of its strategic intentions.″⁣

Harris’ visit comes less than a month after US Defence Secretary Lloyd Austin also travelled to Singapore and Vietnam, which are not American treaty allies but are key security partners. Austin also met Philippine President Rodrigo Duterte in Manila.

Global health, cybersecurity and climate change are also on the agenda for Harris in south-east Asia and she will on Tuesday meet with business leaders about supply chains impacted by the pandemic.