Kuala Lumpur: Malaysia’s former first lady Rosmah Mansor was convicted Thursday of soliciting and receiving bribes during her husband’s corruption-tainted administration, a week after her husband was imprisoned over the massive looting of the 1MDB state fund.

Rosmah was found guilty on three charges of soliciting bribes and receiving 6.5 million ringgit ($2.14 million) between 2016 and 2017 to help a company secure a project to provide solar energy panels to schools on Borneo island. She is expected to remain out on bail for her appeal to higher courts. 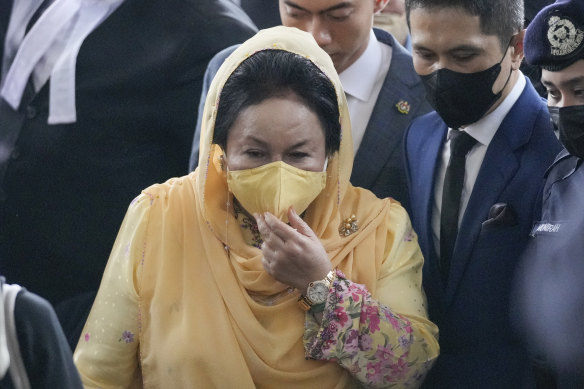 High Court Judge Mohamed Zaini Mazlan said prosecutors proved beyond reasonable doubt that Rosmah corruptly solicited bribes and received money as a reward for herself. He said her defence was a bare denial.

Najib began a 12-year prison term last week after losing his final appeal in one of the five graft cases against him involving the multibillion-dollar pilfering of 1MDB.

Before the verdict, the court heard Rosmah’s application to disqualify the judge after the alleged guilty judgment leaked online. Police said the leaked document was work done within the court’s research unit and was not the judgment, but Rosmah’s defence said they lost confidence the judge could be fair.

Prosecutor Gopal Sri Ram said Rosmah’s application was made in bad faith to delay her verdict. He said there was nothing wrong if the judge did indeed request the view of the court’s research unit. Such a system of judicial research is accepted in many countries and doesn’t discredit the court nor imply any bias, he added.

Malaysia’s top court earlier slammed the action of the website, run by a blogger based in England, as “a deliberate act” to smear the court’s reputation.

Last week, the same website published a document it said was the Federal Court’s guilty verdict against Najib, just before the ruling was read out in court. The court has said that the leaked document was a working draft of the ruling. The court has filed complaints with police over both leaks.

Each of the charges against Rosmah carry a penalty of up to 20 years in prison and a fine of five times the amount of the bribe. The court was hearing mitigation statements Thursday afternoon before deciding the penalty.

Najib and Rosmah have been hit with multiple counts of graft after the shocking ouster of his United Malays National Organisation in the 2018 elections, fuelled by public anger over the 1MDB scandal. UMNO has since returned to power after defections caused the collapse of the reformist government that won 2018 polls.

Rosmah’s trial had shed light on her alleged sway in the government since her husband took office in 2009. Prosecutors said Rosmah wielded considerable influence due to her “overbearing nature,” even though she held no official position. Witnesses testified that a special department, called First Lady of Malaysia, was set up to handle Rosmah’s affairs.

Her former aide, who was jointly charged with Rosmah but later testified for the prosecution, told the court that many businessmen lobbied Rosmah for help to secure government projects. The aide testified Rosmah was feared by civil servants and requests from her department were often swiftly carried out.

The court also heard that she spent 100,000 ringgit a month ($32,877.22) to hire online propagandists to deflect criticism of her lavish lifestyle that led to her being despised by many Malaysians.

During her trial, 23 prosecution witnesses testified but only two defence witnesses were called, including Rosmah. She has told the court she was never involved in government affairs and that her former aide was a corrupt liar who had used her name to solicit bribes and pocketed the money himself.

Separately, Rosmah has also been charged with laundering illegal proceeds and tax evasion linked to 1MDB in another trial that hasn’t started.

1MDB was a development fund that Najib set up after taking office. Investigators allege more than $4.5 billion was stolen from the fund and laundered by Najib’s associates through layers of bank accounts in the U.S. and other countries to finance Hollywood films and extravagant purchases that included hotels, a luxury yacht, artworks and jewellery.