Matt Hancock has ordered officials to draw-up a detailed timeline of decisions made around care homes during the pandemic in a bid to rebut allegations made against him by former No10 aide Dominic Cummings.

The Health Secretary is under growing political pressure after last week admitting he had allowed patients to be discharged from hospitals into care homes without being tested for coronavirus during the first surge.

‘My recollection of events is that I committed to delivering that testing for people going from hospital into care homes when we could do it,’ Mr Hancock told a Downing Street press conference. 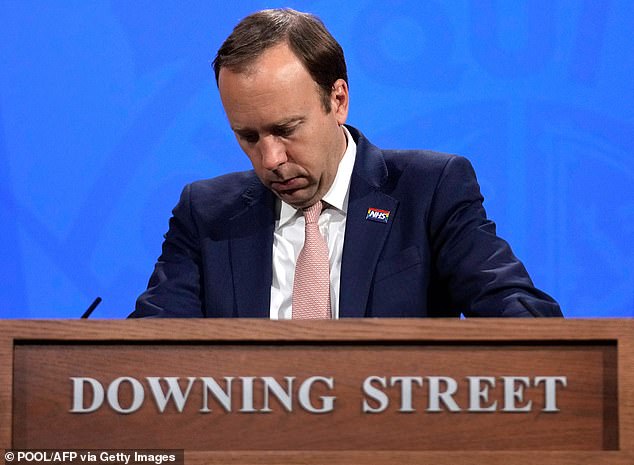 Matt Hancock at a Downing Street press conference on May 27, 2021 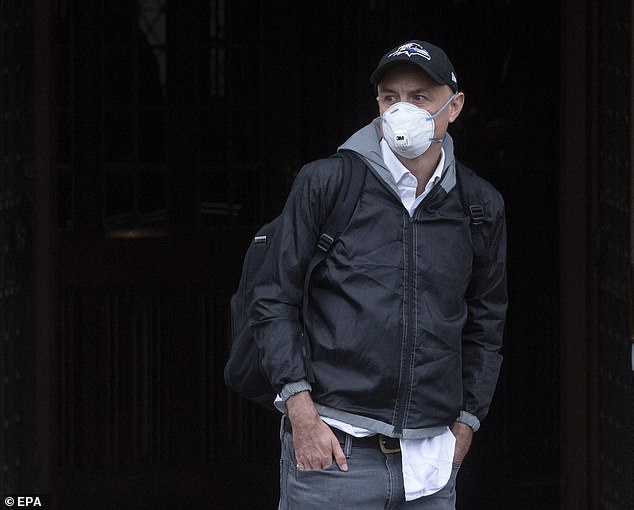 Dominic Cummings leaving Parliament after giving evidence to MPs on May 26, 2021 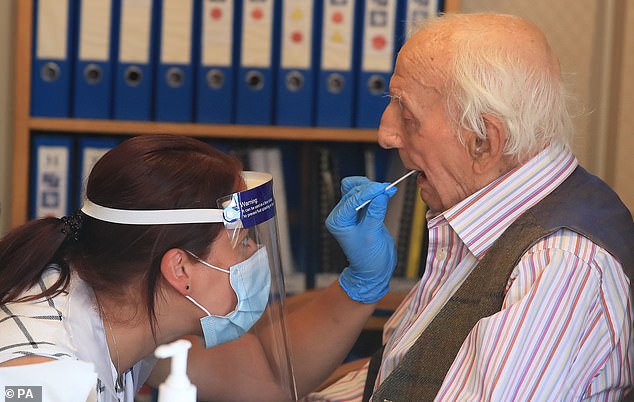 The Health Secretary is under growing political pressure after last week admitting he had allowed patients to be discharged from hospitals into care homes without being tested for coronavirus during the first surge. Stock image used

Ministers are preparing to offer vaccines to all over-18s within weeks to help halt the spread of the Indian variant as the UK reported zero Covid deaths for the first time in 10 months.

So far only adults aged 30 and over have been invited for their jabs and health leaders are focusing their efforts on giving older people their second dose.

But it is understood officials are planning to open up the eligibility to all age groups amid concerns the Indian strain – which has been renamed as the ‘Delta variant’ – is spreading very quickly among the young.

At a speech outside the Jenner Institute in Oxford, where the Oxford-AstraZeneca vaccine was developed, Mr Hancock will pay particular tribute to the NHS, scientists and the armed forces for helping deliver 65million vaccines so far.

‘The biggest risk would have been the failure to find a vaccine at all. So we explicitly embraced risk early on,’ he will say. ‘So we backed lots of horses and invested at risk.

‘And instead of sitting back and waiting to see which vaccines came off, we were tenacious in helping them to get over the line, drawing on the abundant industry experience in our team. The team who worked on our vaccination programme was the single greatest asset that we had in this crisis.’

His comments came 24 hours after Mr Cummings told MPs that the Health Secretary had lied in March last year by announcing all care home residents returning from hospital would be tested when they were not.

Mr Hancock is understood to have tasked policy officials to write a chronology of decisions around adult social care and care homes during the pandemic.

The Telegraph reports that this is preparation for when he appears before MPs in two weeks to give his own evidence in response to Mr Cummings.

A senior Department of Health and Social Care source told the paper: ‘He’s not sparing any effort to rebut Cummings’s narrative.’

Around 25,000 people were discharged from hospitals into care homes without all getting a test during the first wave of the pandemic.

The latest figures from the UK’s statistics agencies show there have been 36,275 deaths involving Covid in care homes since the crisis began.

Mr Hancock last week claimed he only promised to ‘build testing capacity’ after Mr Cummings accused him of lying to Prime Minister Boris Johnson about whether residents would be screened on leaving hospital.

The Health Secretary finally addressed the issue directly as he was repeatedly grilled on the allegations from the maverick former No10 chief at a Downing Street briefing.

Pressed on whether he had told Mr Johnson and others in government early in the pandemic that checks on discharge would happen, Mr Hancock said: ‘My recollection of events is that I committed to delivering that testing for people going from hospital into care homes when we could do it.’

But he insisted ‘it wasn’t possible’ to carry out the testing until the capacity had been built.

He also tried to bat away questions by suggesting they are best considered in the public inquiry, which will not begin until next year. ‘There will be a time when we can go into this in detail,’ he said.

Earlier, Mr Hancock told the Commons that Mr Cummings’ claims during an explosive committee hearing yesterday – including that he lied repeatedly, failed care home residents and should have been ‘sacked daily’ – were ‘not true’ and he had been ‘straight with people’.

However, he was challenged on the issue again after he seemed to avoid responding to the specific allegation about care homes – where thousands died when coronavirus ran riot in the initial phase of the pandemic.

Mr Cummings said Mr Hancock ‘categorically’ told colleagues in March that people would be tested before being returned to homes.

But the former aide said they ‘subsequently found out that that hadn’t happened’.

Mr Hancock was asked if he could say he protected care homes, and was also asked if he made the commitment on testing. 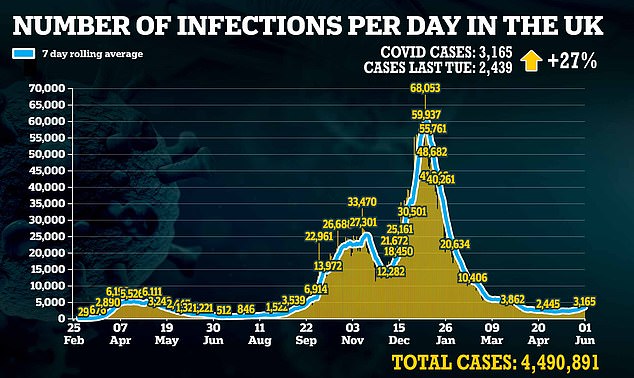 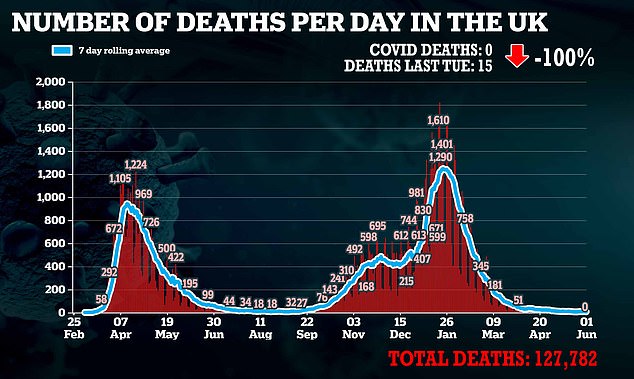 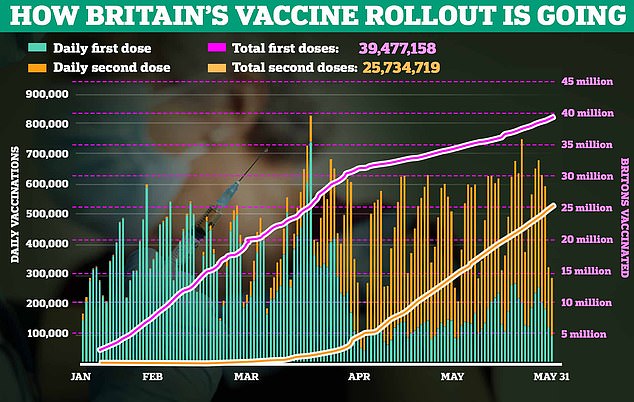 ‘Now when it comes to the testing of people as they left hospital and went into care homes, we committed to building the testing capacity to allow that to happen.

‘Of course it then takes time to build testing capacity.

‘In fact, one of the critical things we did was set the 100,000 target back then to make sure we built that testing capacity and it was very effective in doing so.

‘And then we were able to introduce the policy of testing everybody before going into care homes, but we could only do that once we had the testing capacity which I had to build, because we didn’t have it in this country from the start.

‘We started with a capacity of less than 2,000 in March last year and got to 100,000 tests a day. And we set all of this out at the time in public documents.

‘It’s all a matter of public record.’

Summoned to answer an urgent question in the House, Mr Hancock said: ‘These unsubstantiated allegations around honesty are not true.

‘I have been straight with people in public and in private throughout.’

Mr Hancock also dismissed Mr Cummings’ criticism of his testing target, saying it was ‘how you get stuff done in government’.

‘I am proud of everyone in my department,’ he said.

In a brutal swipe at the ex-No10 chief, who was ousted from Downing Street in November, he said people can see that over the past six months ‘governing has become a little easier and we have been able to deliver’.

Dominic Cummings claimed in his bombshell committee evidence that there were ‘numerous’ examples of Matt Hancock lying during the pandemic.

He gave four main examples – all of which Mr Hancock has made clear he rejects.

‘Lie’ 1: Hospital patients were being tested for Covid before they went back to care homes

‘We were told categorically in March (by Mr Hancock) that people would be tested before they went back to homes, we only subsequently found out that that hadn’t happened.

‘Lie’ 2: Patients were getting treatment they needed in first peak

Mr Cummings alleged Mr Hancock lied about everybody getting the treatment they deserved in the first peak when ‘many people were left to die in horrific circumstances’.

Asked to provide evidence of the Health Secretary’s lying, the former chief aide to the Prime Minister told the Commons committee: ‘There are numerous examples. I mean in the summer he said that everybody who needed treatment got the treatment that they required.

‘He knew that that was a lie because he had been briefed by the chief scientific adviser and the chief medical officer himself about the first peak, and we were told explicitly people did not get the treatment they deserved, many people were left to die in horrific circumstances.’

‘Lie’ 3: Pandemic plans were up to scratch

Mr Cummings said that assurances given to him by Mr Hancock in January last year that pandemic preparations were brilliant ‘were basically completely hollow’.

The former chief aide to the Prime Minister told the Commons committee he received a response from Health Secretary Matt Hancock assuring: ‘We’ve got full plans up to and including pandemic levels regularly prepared and refreshed, CMOs and epidemiologists, we’re stress testing now, it’s our top tier risk register, we have an SR bid before this.’

Mr Cummings told the committee: ‘I would like to stress and apologise for the fact that it is true that I did this but I did not follow up on this and push it the way I should’ve done.

‘We were told in No 10 at the time that this is literally top of the risk register, this has been planned and there’s been exercises on this over and over again, everyone knows what to do.

‘And it’s sort of tragic in a way, that someone who wrote so often about running red teams and not trusting things and not digging into things, whilst I was running red teams about lots of other things in government at this time, I didn’t do it on this.

‘If I had said at the end of January, we’re going to take a Saturday and I want all of these documents put on the table and I want it all gone through and I want outside experts to look at it all, then we’d have figured out much, much earlier that all the claims about brilliant preparations and how everything was in order were basically completely hollow, but we didn’t figure this out until the back end of February.’

‘Lie’ 4: PPE supplies were hampered by NHS and Treasury

Mr Cummings made an allegation that Mr Hancock squirmed over shortages of PPE during the pandemic.

He claimed that in mid-April, just before he and the PM were diagnosed with having Covid, Mr Hancock gave assurances that ‘everything is fine with PPE, we’ve got it all covered, etc, etc’.

However, when Mr Cummings returned to work he discovered there was a ‘disaster over PPE and how we were actually completely short, hospitals all over the country were running out’.

‘The Secretary of State said in that meeting this is the fault of Simon Stevens, this is the fault of the Chancellor of the Exchequer, it’s not my fault, they’ve blocked approvals on all sorts of things. I said to the cabinet secretary, please investigate this and find out if it’s true,’ Mr Cummings claimed.

Mr Cummings took aim at Mr Hancock over his introduction of a target of carrying out 100,000 tests a day last summer.

‘This was an incredibly stupid thing to do because we already had that goal internally,’ Mr Cummings said.

‘What then happened when I came back around the 13th was I started getting calls and No 10 were getting calls saying Hancock is interfering with the building of the test and trace system because he’s telling everybody what to do to maximise his chances of hitting his stupid target by the end of the month.

‘We had half the Government with me in No 10 calling around frantically saying do not do what Hancock says, build the thing properly for the medium term.

‘And we had Hancock calling them all saying down tools on this, do this, hold tests back so I can hit my target.’

Mr Cummings claimed that Mr Hancock should have been ‘fired for that thing alone’.

‘The whole of April was hugely disrupted by different parts of Whitehall fundamentally trying to operate in different ways completely because Hancock wanted to be able to go on TV and say ‘look at me and my 100k target’,’ the former aide said.

‘It was criminal, disgraceful behaviour that caused serious harm.