Grey’s Anatomy liar CONFESSES: Writer who based episodes on her own stories of battling cancer and having an abortion admits she made it all up for attention: ‘I lied, there’s no excuse’

The Grey’s Anatomy writer accused of faking a cancer battle and fabricating stories of abortion and family suicide to inspire episodes of the show has confessed that she made it all up in a bombshell interview with The Ankler.

Elisabeth Finch admits in the interview with journalist Peter Kiefer – who first broke the story of her lies for The Ankler – that she ‘f****d up’.

She confesses that she made it up in a desperate grab for attention after becoming addicted to the constant care she received when she hurt her knee hiking in 2007.

She also claimed it was the result of the ‘trauma’ of her older brother ‘abusing’ her when they were kids. 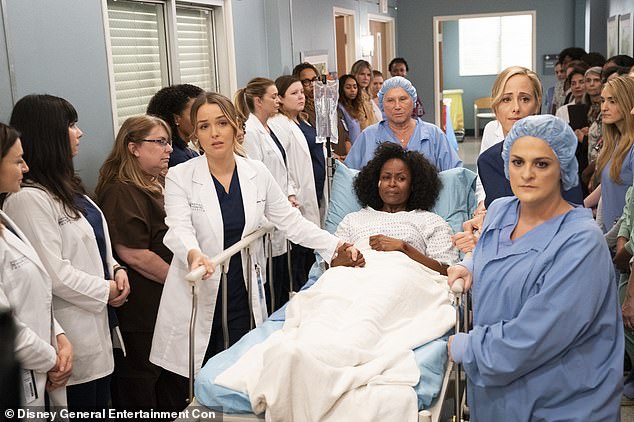 Elisabeth Finch admits in the interview with journalist Peter Kiefer – who first broke the story of her lies for The Ankler – that she ‘f****d up’. She is shown, front right, in an episode of Grey’s Anatomy

Finch went to such great extents to conceal the cancer lie that she had friends drop her off at the famed Mayo Clinic in Minnesota, pretending she was having treatment inside, only to roam the halls to kill time while her friends waited outside.

‘I told a lie when I was 34 years old and it was the biggest mistake of my life. It just got bigger and bigger and bigger and got buried deeper and deeper inside me. I’ve never had any form of cancer. I know it’s absolutely wrong what I did. I lied and there’s no excuse for it.’

She claims the ‘context’ of the lie is that she suffered ‘years of medical purgatory’ after hurting her knee while hiking, and requiring multiple surgeries to fix it.

‘What ended up happening is that everyone was so amazing and so wonderful leading up to all the surgeries. They were so supportive and then I got my knee replacement. It was one hell of a recovery period and then it was dead quiet because everyone naturally was like “Yay! You’re healed!”

‘But it was dead quiet. And I had no support and went back to my old maladaptive coping mechanism – I lied and made something up because I needed support and attention and that’s the way I went after it.

‘That’s where that lie started – in that silence.’

Finch’s was hired to work on Grey’s Anatomy in 2014, and for years pretended that she was forced to undergo grueling chemotherapy. She claimed the treatment cost her a kidney, part of her tibia and forced her to have an abortion.

She also described her medical ordeal in articles for Elle, The Hollywood Reporter and Shondaland, the website created by Grey’s Anatomy producer Shonda Rhymes.

Eventually, parts of her fake story ended up in the story lines of the show.

Colleagues from Grey’s Anatomy told The Ankler that Finch ‘always had some tragedy going on.’

‘Things that don’t happen to other people happen to her all the time,’ one said. 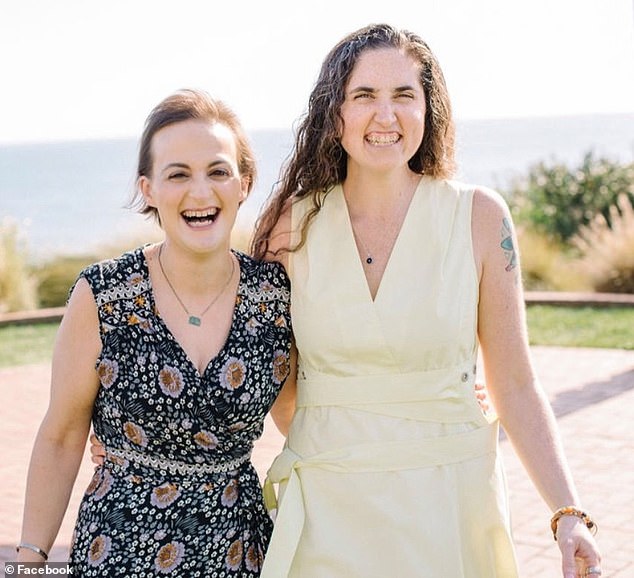 Finch’s ex-wife Jennifer (right) is who reported the alleged lies to Shondaland and Disney. The pair are shown on their 2020 wedding day

They described how she would show up to work with a shaved head, and only eat saltines because she claimed it was the only food she could ‘keep down.’

Eventually, the lies ran away from her. ‘There’s a momentum that grows. Why do alcoholics keep drinking? Why do addicts keep using more and more? I think it was a lie that got completely out of control and I got out of control with it. I wasn’t some calculating puppet master trying to buck the system.

‘I think it was something that got really freaking out of control and that’s what happens when you’re dealing with a maladaptive way of dealing with things. It just gets bigger.

It wasn’t until she met her now ex-wife, Jennifer Beyer, in 2019, that things started to unravel for her.

Beyer’s background as a nurse piqued her suspicion about Finch’s story.

She discovered that she’d lied, and prompted her to tell family and friends. Finch initially told the couple’s friends and family but she stopped short of telling her bosses.

That is when Beyer approached Grey’s Anatomy producers and told them Finch had lied.

She said that she did not anticipate being found out, and that she felt no need to confess her lies even to her wife.

‘I didn’t walk around thinking that I have this secret and that I was going to get caught. I didn’t stand there on my wedding day thinking, ‘S**t, I haven’t told her this’ because it was buried so far down.

‘Every once in awhile the thought would pop up that I wish I could tell Shonda because of the person that she is and because she has the ability to understand that people do really f****d up things but that doesn’t make them a f****d up person.

‘She sees people and the antidote to shame is being seen.’

The story made its way to Kiefer, who broke it for The Ankler.

Finch hid from the story, returning to the trauma center where she’d met her wife.

She also lied about being close friends with one of the victims from the anti-Semitic mass shooting attack on a Pittsburgh synagogue in 2018, something she’d complained to Grey’s bosses about and asked for time off because of.

She had also claimed to friends that the FBI allowed her onto the crime scene to collect her friend’s remains. She falsely claimed that her brother Eric had committed suicide, telling colleagues: ‘I’ve been gone bc my brother died by suicide.

‘He was on life support for a short while but ultimately did not survive I say this not because I need or want anything from anyone, I’m not a delicate flower or whatever, I just want people to know I’m still here, still part of the team.’

Her brother, as The Ankler notes, is ‘very much alive’ and working as a doctor.

In 2012, she started telling friends that doctors has found a tumor on her spine.

She now admits that she chose chondrosarcoma because it was ‘a particular form of cancer that was difficult to treat.’ 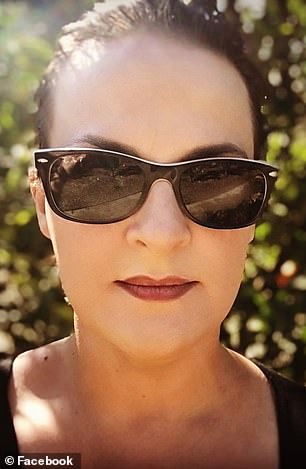 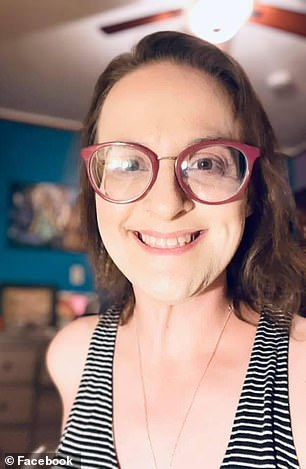 Finch, 44, is now said to be under investigation. Her attorney has said she will not comment on the allegations or her pending divorce 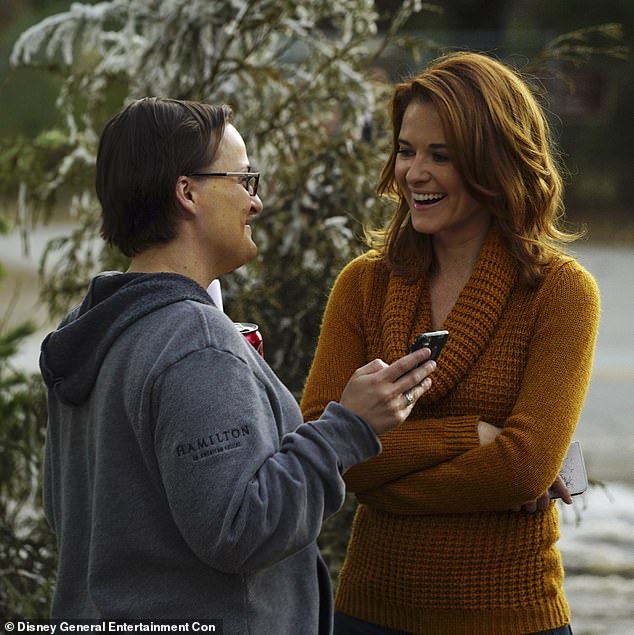 Finch with one of the show’s stars Sarah Drew in an episode titled Who is He and What Is He to You? 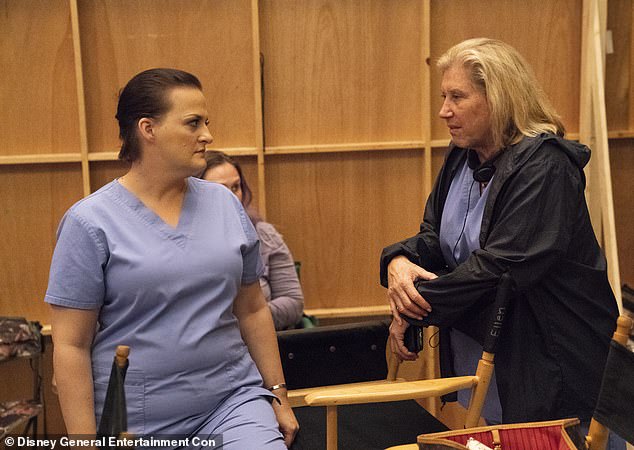 In her first article about the diagnosis, she wrote for Elle: ‘I catch fragmented glimpses of my bald reflection in the elevator mirror as I go up, up, up – to a white-walled conference room, where a small herd of well-groomed doctors, all equally inscrutable, awaits.

In the original scoop, Finch did not comment. She resigned from the show and checked into the trauma center again, hiding away for six weeks. Now, she says she wants to come clean.

‘And then who’s sitting there waiting for me to reach out. I have no clue. It’s been a very quiet, very sad time.

‘There were people who, when your article came out, were immediately very, very nasty on text. Family and friends who called me a monster and a fraud and said that’s all I’ll ever be known for and soon more truth would come out,’ she told Kiefer.

Among those who were suspicious was Fred Einesman, a medical consultant hired by Grey’s Anatomy to corroborate medical storylines and guide writers on what is and is not realistic.

He felt Finch not only used her fake stories to garner sympathy, but that she weaponized them against colleagues.

Others agreed. One told The Ankler: ‘I know the people that she hurt and that she lied to and that she bullied and they were always people with less power than her, compassionate people with kind souls and she absolutely targeted them.

‘That’s what master manipulators do. What she’s done is absolutely unconscionable but she doesn’t have a conscience… She does not deserve to have a voice.’

Finch has not been working since the scandal broke in March.

Now, she says she hopes to return to writing for TV shows, and it says it would be her ‘dream’ to work for The Handmaid’s Tale.