The Greens are protecting a Yarra councillor who faces assault charges from a vote of no confidence when she returns to the council for the first time since a fight outside a gay nightclub.

Cr Anab Mohamud, 35, has been recovering from serious facial injuries after she allegedly yelled homophobic slurs during an altercation outside Chasers nightclub in South Yarra in the early hours of April 11, which led to assault, offensive behaviour and public drunkenness charges against her. 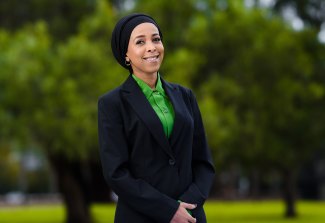 She will appear at Melbourne Magistrates Court in November. A 29-year-old woman from St Kilda has been charged with recklessly causing injury and affray over the incident.

Cr Mohamud will return to council duties on Tuesday for the first time since the incident, and she will face a vote of no confidence, which is expected to fail, filed by independent councillor Herschel Landes. Cr Mohamud was elected to council last November to help form Australia’s first Greens majority local government. Without her, the party would lose its majority.

In his motion, Cr Landes called on Cr Mohamud to excuse herself from council until the charges have been settled because he had no confidence that she “can fulfil her duty as a councillor, to act in the best interests of her constituents and the council and to provide the necessary trust and working relationships to deliver the public confidence and integrity of local government”. 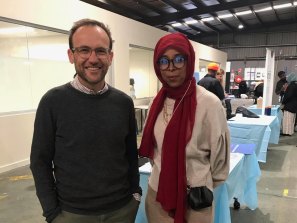 In response, Cr Mohamud told her colleagues she “disagreed entirely” and said Cr Landes had contradicted himself by acknowledging she was entitled to the presumption of innocence.

“As leaders, we are the ones that should set an example by respecting the law to take its course,” she said in an emailed response to councillors.

“It’s vitally important that I’m there representing my community, [and] am here to represent Yarra’s diverse peoples, who voted for me. I have heard from so many members of the community who have expressed their support, and I look forward to continuing to give them a voice in my capacity as a Yarra City councillor.”

Even if the motion succeeds, it would not force Cr Mohamud to leave council.

Speaking to The Age, Cr Landes said the charges against Cr Mohamud should have been laid out transparently in the first place. Instead, voters and councillors learnt of Cr Mohamud’s charges through the media, which Cr Landes said raised questions about mayor Gabrielle de Vietri’s leadership and hurt public trust.

Separately, Cr Mohamud is charged with assault over an unrelated incident in December last year, which will go before Dandenong Magistrates Court in August.

She intends to clear her name, the Greens have previously said.

A photo supplied by the Greens, with Cr Mohamud’s consent, of her serious injuries.Credit:Victorian Greens/ Anab Mohamud

She came to Australia as a refugee from Somalia more than 20 years ago, as the eldest child of nine, and has convened Fitzroy’s Somali women’s group.

“As a young woman from a Somali background growing up in Australia, I’ve faced the common struggles that young people from African backgrounds experience: feeling we are outsiders and can never belong here,” she said in her campaign statement.

Cr Mohamud was working as a community liaison officer at Fitzroy Primary School last year, supporting multicultural families, staff and the school. She is no longer employed there.

She has described her sense of “neglect, disenfranchisement and voicelessness” as a resident in the Atherton Gardens high-rise public housing estate in Fitzroy since 2006. She lives there with her young daughter.

In a video with federal Greens MP Adam Bandt last year, she spoke of overcrowding in public housing and revealed she had experienced homelessness. Cr Mohamud continues to have the support of party leader Mr Bandt, who posted a photo to his public Facebook page with Cr Mohamud on April 10 – the day leading up to her altercation outside Chasers nightclub.

“It’s good that Cr Mohamud’s recovery from being brutally attacked is coming along well enough for her to return to work,” he said in response to questions. “As the first Muslim woman from public housing on Yarra Council, I support her representing her constituents.”

Cr de Vietri and Greens councillors in Yarra have also stood by her.

Cr Mohamud declined an interview with The Age and did not respond to emailed questions.

A councillor can be disqualified if they are convicted of an offence punishable with two years or more behind bars.

If Cr Mohamud were to leave council, which there is no suggestion of, a countback would most likely elect Labor’s Karen Douglas (who didn’t want to speculate when contacted by The Age).

Cr Mohamud was the second candidate elected in the Langridge ward, which takes in suburbs such as Collingwood and Clifton Hill.

She received a healthy 17.34 per cent of the first-preference votes in Langridge, behind socialist Stephen Jolly (26.07 per cent) but ahead of Cr de Vietri (11.89 per cent) from the Greens.

Every Greens candidate who stood in Yarra was elected, wiping out Labor in its heartland.

The Victorian Greens did not respond to questions about Cr Mohamud, with co-convenors Effy Elden and Nyssa Sims saying: “We’re very pleased that Cr Mohamud is recovering well, and we look forward to her return to work representing the Yarra community.”