Glamorous Charles and Camilla dazzle at Commonwealth dinner in Rwanda

Prince Charles and Camilla tonight dazzled at a black tie dinner in Rwanda as they greeted leaders from Commonwealth countries for the glamorous event.

The Duchess of Cornwall, 74, opted not to wear a tiara but instead wore Bruce Oldfield and donned her new order of the garter.

She also wore her diamond encrusted family order bearing a portrait of the Queen on her elegant deep blue evening gown.

The duchess hosted the dinner alongside her husband, the Prince of Wales, on behalf of the Queen at the Marriott Hotel in the Rwandan capital, Kigali. The Government Dinner is always held on the opening day of the biannual gathering of leaders.

An aide said: ‘The Duchess of Cornwall has chosen not to wear a tiara on this occasion.’

The couple were met by a familiar face, the Master of the Queen’s Household, The Earl of Rosslyn, who was there to represent Her Majesty, who is head of the Commonwealth, and oversea the event. He presented The President of the Republic of Rwanda, His Excellency Paul Kagame, and The First Lady, Her Excellency Jeanette Kagame, as well as the Commonwealth Secretary-General, The Baroness Scotland.

There was a genial air amongst the leaders of the ‘family of nations’ as the Prince and duchess stood to greet each one of them in the traditional line-up.

The first to speak to them were British Prime Minister Boris Johnson – his shirt hanging out of the back of his trousers – and his wife Carrie. It appears that their cup of tea earlier in the day had cleared any air between Charles and Mr Johnson as the two greeted each other jovially. Carrie gave the Prince a low curtsey.

The politician had one eye on the cameras as he raised his hands in the air loudly proclaiming ‘democracy, democracy’. 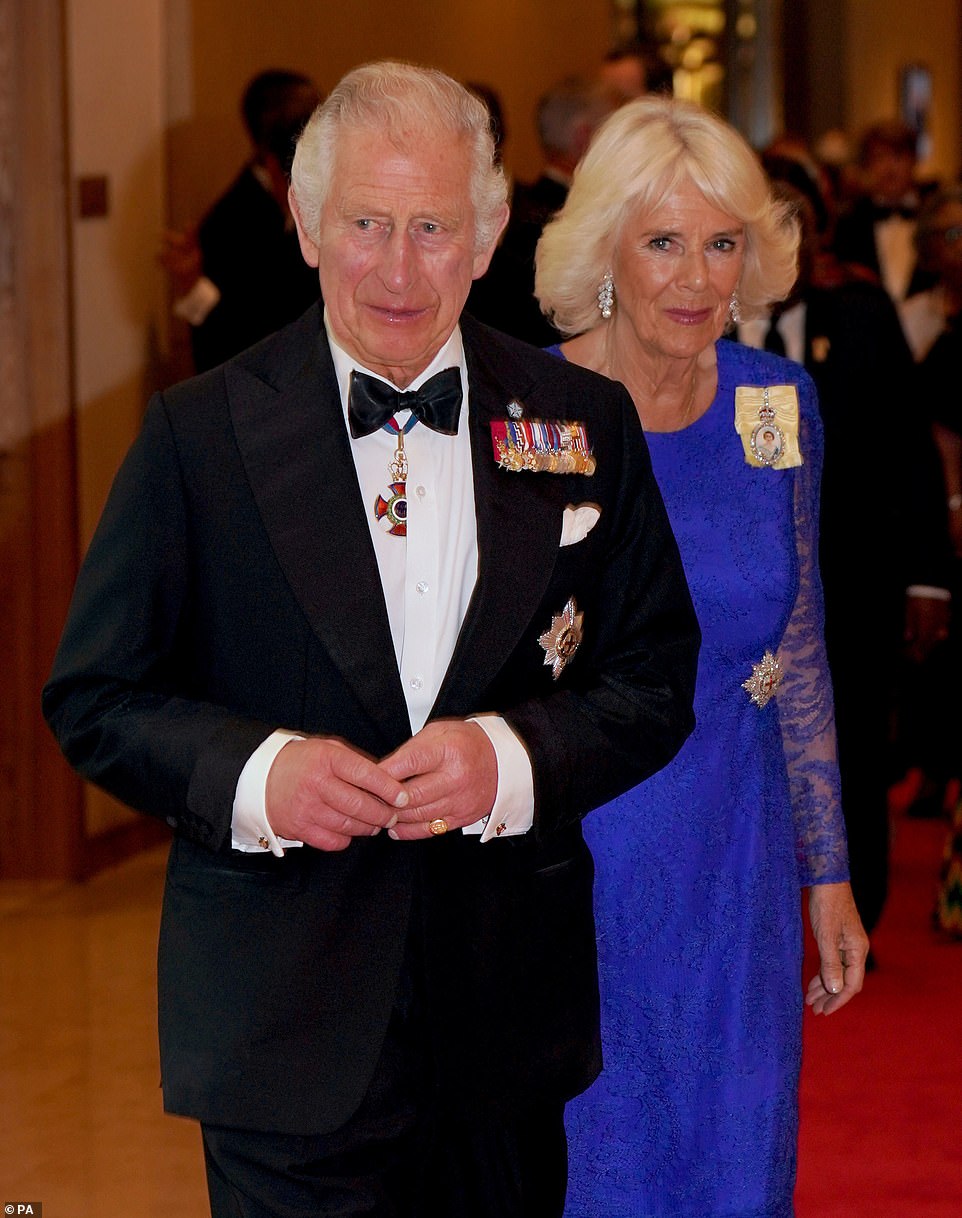 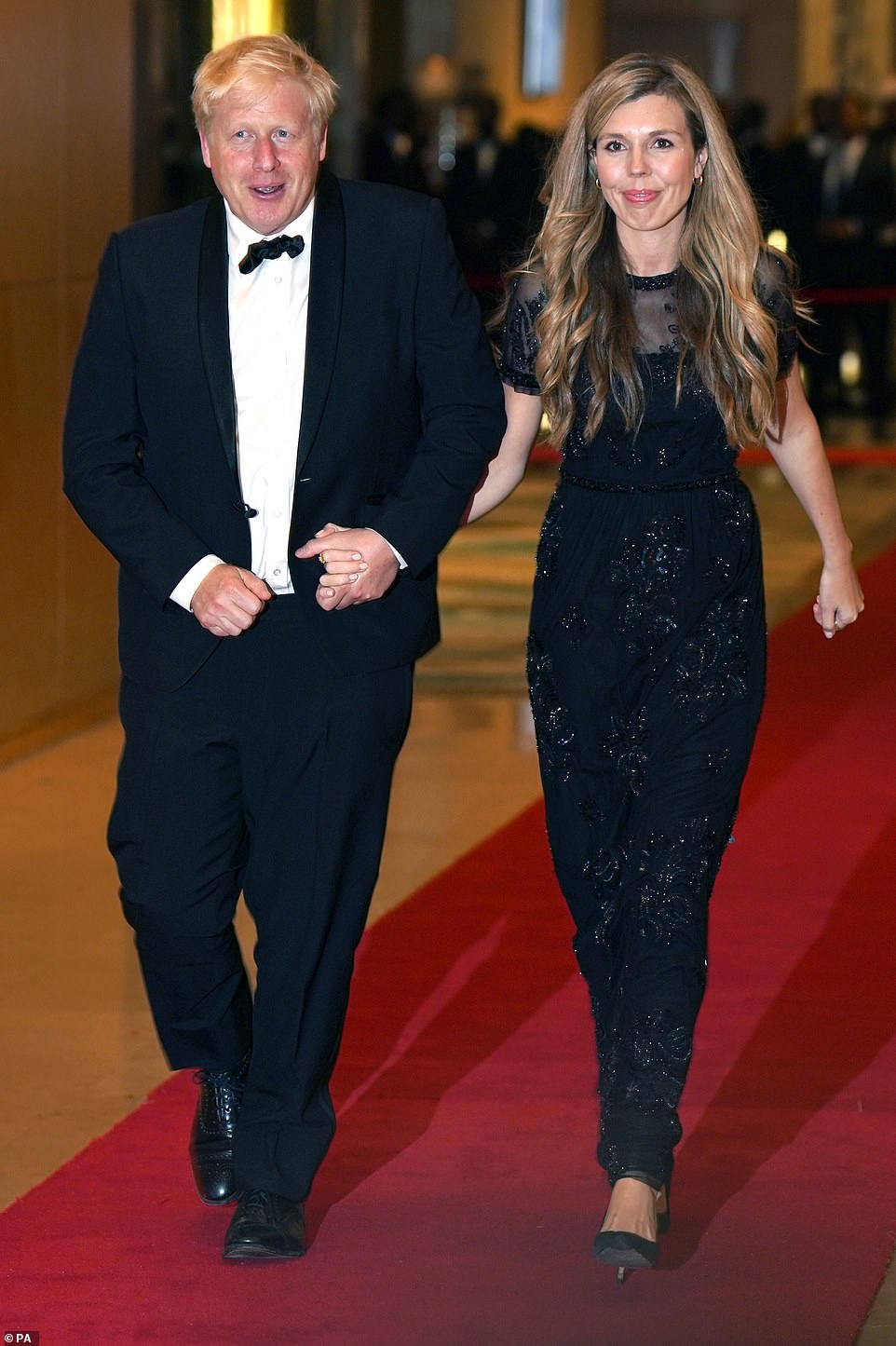 A much-anticipated meeting between Charles and Boris Johnson (pictured with Carrie Johnson) lasted 15 minutes. Before they sat down for talks, Mr Johnson had stepped back from comments he would tell Charles to be open-minded about his Rwanda asylum policy 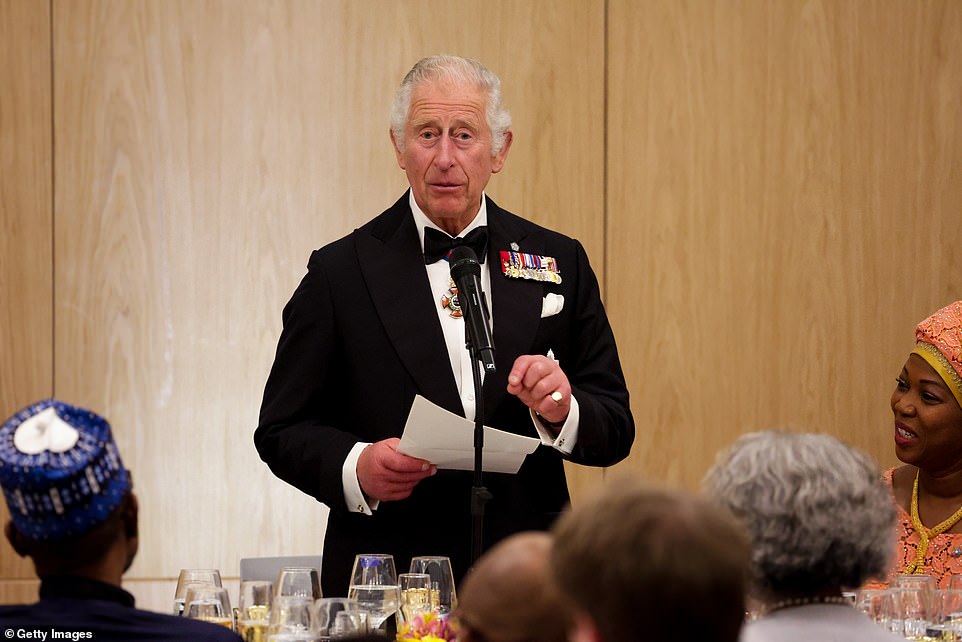 The prince is representing the Queen at the Commonwealth Heads of Government Meeting (Chogm), but his visit to the Rwandan capital Kigali has been overshadowed by a row over reported comments he made criticising the Government’s scheme to send asylum seekers to the east African nation

Your Excellencies, Ladies and gentlemen –

The Queen, I know, would want me to thank you most warmly for those kind words and sentiments. Her Majesty will be most touched and grateful and, I know, very much regrets that she is unable to join our gathering. She has asked me to pass on her special wishes to you all for every success in your discussions, as she has on so many occasions before, and you can imagine on my return I will report back.

For my part, you can have no idea how pleased I am that, after these recent years of separation, this is not a video meeting. Useful as all the technology may be, it is still a great joy to see you all in person here– and without the mute button to cause a certain amount of confusion!

I can only offer my most sincere thanks to you, President Kagame, for hosting us all, and giving us the chance to experience your extraordinary country. For my wife and myself it is particularly special to be here because Rwanda is one of the few members of the Commonwealth we had not, until now, managed to visit.

As I said earlier today, our Commonwealth family must have something fairly unique about it. After all, an increasing number of countries are seeking membership, with Mozambique and Cameroon having joined in the nineties and Rwanda in the noughties; and now, after a short pause, Togo and Gabon are on the path to membership, with others also expressing interest. Perhaps, Your Excellencies, they have discovered that the country with the highest percentage of female parliamentarians is in the Commonwealth (here in Rwanda as it happens); that the world’s fastest male and female runners (not to mention marathon world record-holders) are Commonwealth nationals; that Reggae, Calypso, Afrobeats, High-life, Hip-Life, Bollywood and Nollywood all originate from the Commonwealth; that the Commonwealth has given the world some of its finest dishes – curry, Jollof rice, maple syrup, Roti, Jerk chicken, Nasi Goreng and, dare I say, fish and chips! Or that the men’s and women’s Rugby world Champions and the ten highest ranked men and women’s cricket teams are – you’ve guessed it! – all from the Commonwealth. And, who knows, with a record sixCommonwealth countries qualified for the world cup finals in November, perhaps football will be added to that impressive list… one can but dream!

In the meantime, I can only say that I am greatly looking forward to visiting Birmingham for the Commonwealth Games next month. In a world currently riven by conflict and division, these Games – so aptly called ‘the friendly games’ – stand as a shining celebration of our unity, our diversity and our pursuit of shared excellence. Your Excellencies, as you, as Leaders, champion these values, perhaps you would allow me to propose my own toast – which is to each and every one of you and you don’t have to get up.

After greeting all 54 leaders and their partners, the royals joined them at a reception on an outdoor terrace for around half an hour.

At 9pm sharp the party, with the Prince and duchess bringing up the rear, entered the dinner.

The dinner menu had been selected to recognise cultural, religious, and dietary sensitivities as well as use local produce where possible.

It featured Avocado and Cucumber Roulade on a seeded Cracker with Roasted Red Pepper and Mango Salsa, Suprême of Chicken with Wild Mushrooms, Wilted Amaranth Leaves and Cassava Croquettes followed by Passion Fruit Cheesecake with Watermelon, Lime and Yoghurt.

There were wines from the UK, New Zealand, Australia and South Africa with Question Coffee, a local social enterprise organisation which provides work for female Rwandan coffee growers.

Music played during the dinner was performed by three Rwandan musicians, including one playing the Inanga, a traditional musical instrument.

The table centre pieces were traditional Rwandese woven baskets which are known as ‘peace baskets’ and had been woven especially for the dinner by Irebe women weavers using eco-friendly raw materials such as long grass, from the swamps and mountain in Rwanda.

The craft is call ‘Agaseke’ and the baskets are traditionally used to carry gifts to friends and family, a symbol of peace, gifting, and friendship.

The baskets had been found by the Prince’s team at Clarence House when they did a preliminary visit and Buckingham Palace so loved them they decided to incorporate them in the decorations for the night.

The table centre mats for the evening dinner were made in the CHOGM 2022 logo colours by women at the Mayange Reconciliation Village which The Prince of Wales visited on Wednesday.

And even the napkins used during the dinner were produced by the Nyamirambo Women’s Centre, a project which aimed to address gender-based violence, gender inequality and discrimination.

The Prince had President Kagame on his right and the First Lady of Sierra Leone on his left.

The duchess had Canadian PM Justin Trudeau to her right and the President of Ghana on her left.

All Commonwealth leaders had a gold goblet with their emblem and country engraved on it by their place setting – a typically thoughtful gesture by Buckingham Palace.

Before departing for Kigali International Airport, the Prince and duchess met staff who played an important role in delivering the dinner, or helped elsewhere to make their visit so memorable.

Prince Charles, in his speech at the dinner, continued:  ‘Many of those wrongs belong to an earlier age with different – and, in some ways lesser – values.

‘By working together, we are building a new and enduring friendship.’ Charles, who will succeed the Queen as head of the Commonwealth, went on to say: ‘For while we strive together for peace, prosperity and democracy, I want to acknowledge that the roots of our contemporary association run deep into the most painful period of our history.

‘I cannot describe the depths of my personal sorrow at the suffering of so many, as I continue to deepen my own understanding of slavery’s enduring impact.

‘If we are to forge a common future that benefits all our citizens, we too must find new ways to acknowledge our past. Quite simply, this is a conversation whose time has come.’ 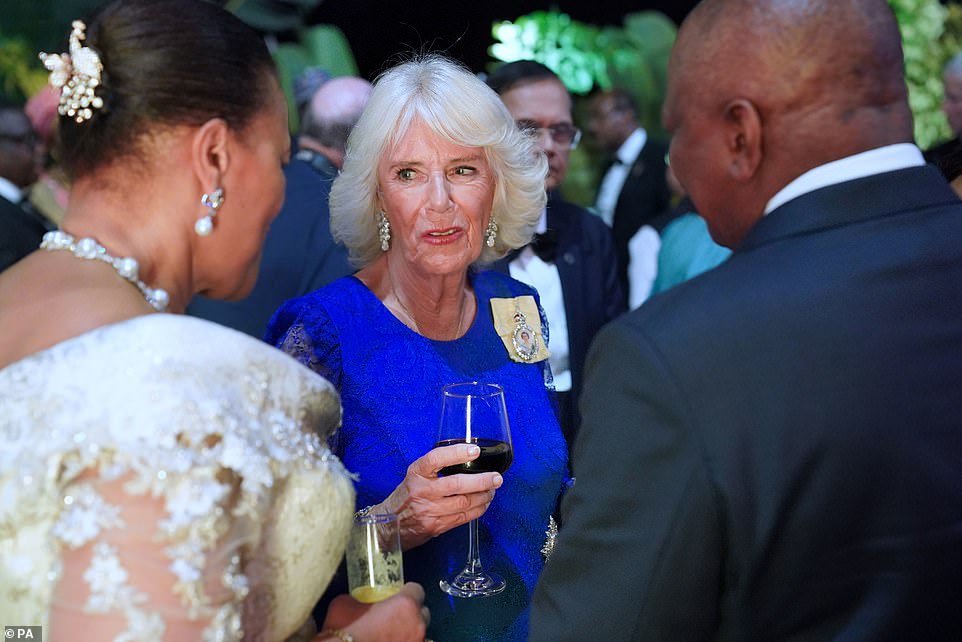 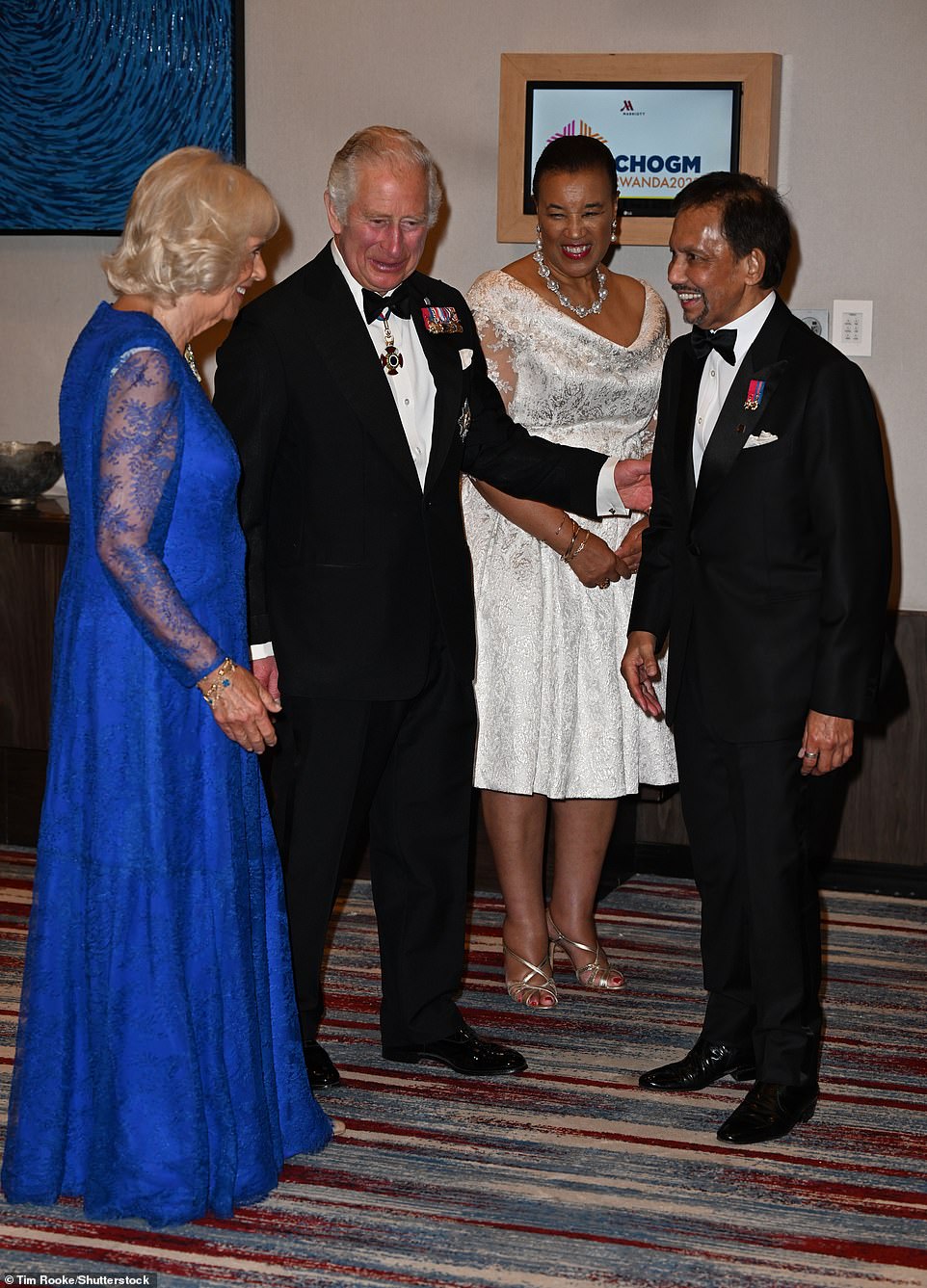 The couple were met by a familiar face, the Master of the Queen’s Household, The Earl of Rosslyn, who was there to represent Her Majesty, who is head of the Commonwealth, and oversea the event. Pictured welcoming guests 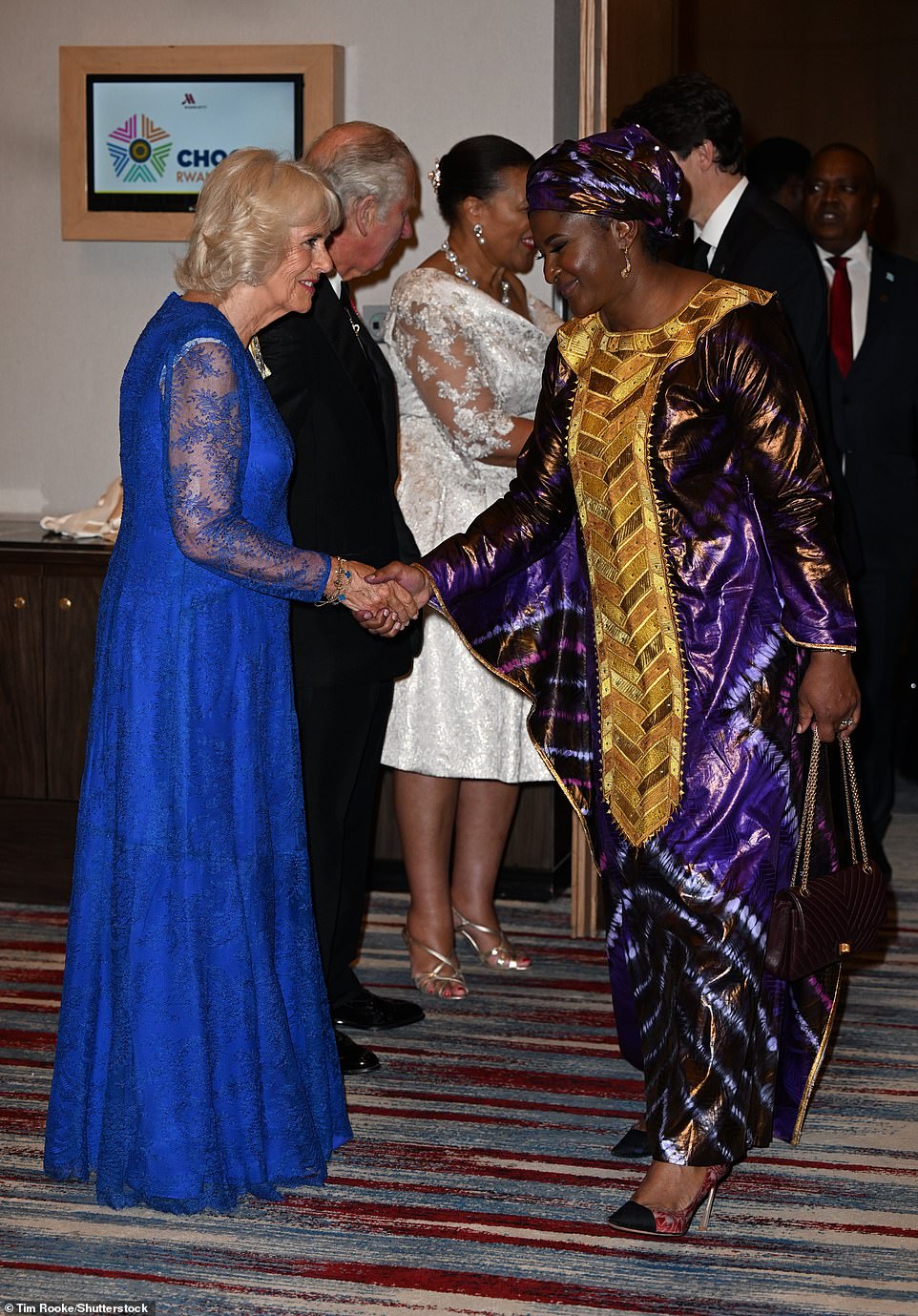 All Commonwealth leaders had a gold goblet with their emblem and country engraved on it by their place setting – a typically thoughtful gesture by Buckingham Palace. The Duchess of Cornwall is pictured

Charles also told the world leaders decisions about whether they keep the Queen as head of state or become a republic was an issue for them to make, and a long life had taught him these fundamental changes could be made ‘calmly and without rancour’.

His comments are likely to be interpreted as acknowledging forces already in motion, as a number of Caribbean nations have already suggested they may ditch the British monarchy and elect their own heads of state.

‘I want to say clearly, as I have said before, that each member’s Constitutional arrangement, as republic or monarchy, is purely a matter for each member country to decide,’ the Prince said.

Charles and Mr Johnson had met briefly before they joined leaders from the Commonwealth’s 54 member states in the Kigali Conference Centre’s main hall for the opening ceremony.

Delegates included the Sultan of Brunei, the presidents of Botswana, Guyana, Nigeria and Uganda and prime ministers from Canada, Jamaica, St Lucia, Cameroon and Singapore.

The British Prime Minister had warmly greeted the heir to the throne ahead of the Chogm launch, displaying positive body language after he appeared to take a veiled verbal swipe, on Thursday, at the Prince and those who have attacked his plans to forcibly remove migrants to Rwanda. 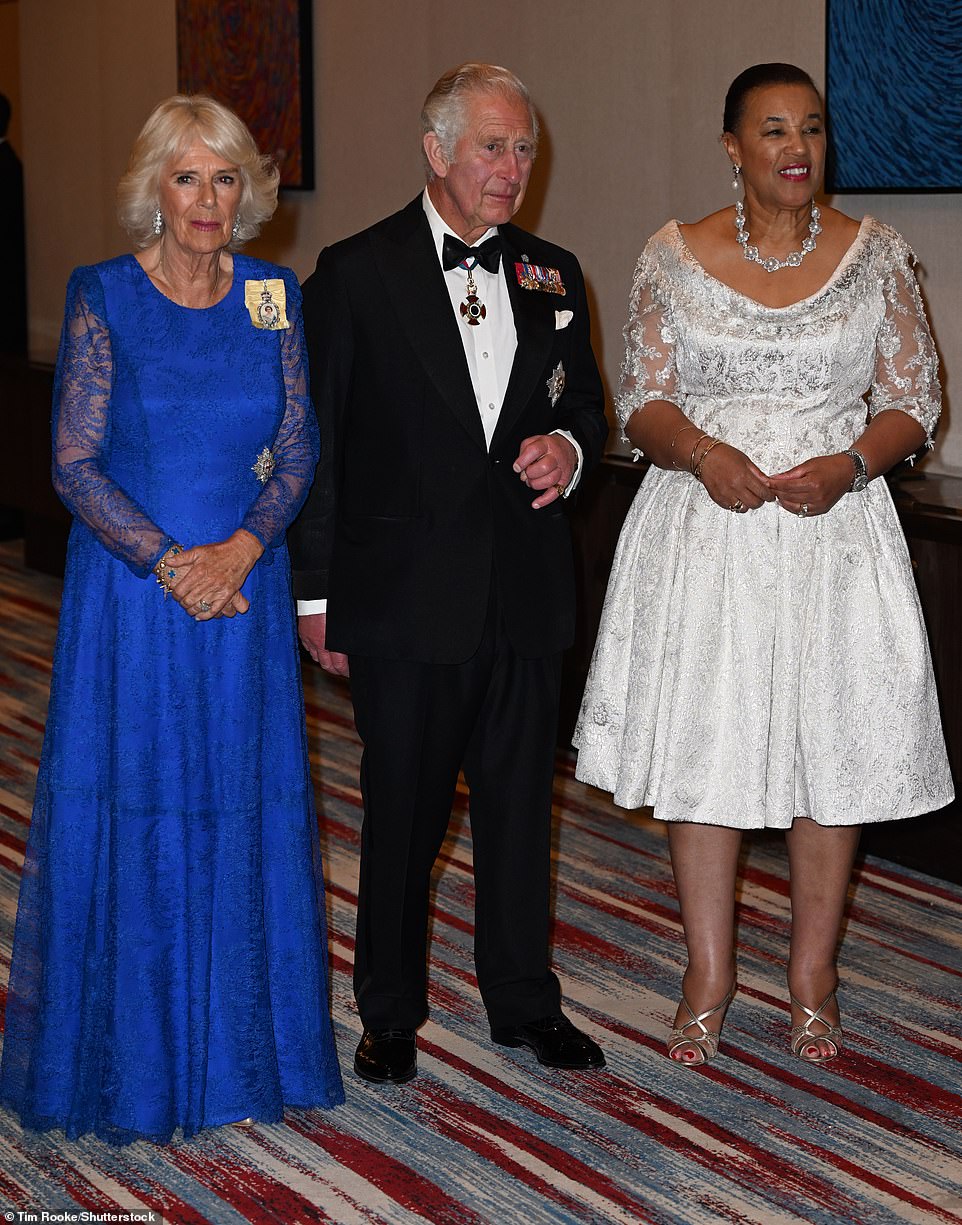 Charles’s speech to Commonwealth leaders, which also covered the issues of youth opportunity and climate change, was considered an opportunity to ‘set out his vision’ for its future, an aide said

Charles’s speech to Commonwealth leaders, which also covered the issues of youth opportunity and climate change, was considered an opportunity to ‘set out his vision’ for its future, an aide said.

With 60 per cent of the Commonwealth’s 2.6 billion population under 30, Charles sees ensuring youth opportunity, training and employment as ‘critical’.

Many member states were ‘massively impacted’ by climate change and so for the Prince to bring businesses to Chogm to discuss potential solutions was ‘critically important’, the aide added.

And Charles realised that in order to achieve that vision the ‘historic shared past’ must be recognised, which meant him making a personal statement about his sorrow.

After the opening ceremony the world leaders went into a closed session to decide whether secretary-general Baroness Scotland should have another term in office.

They re-elected Baroness Scotland, dealing a blow to Mr Johnson, who had wanted her ousted, but their deliberations lasted much longer than expected and meant Charles was unable to host new heads of state at a reception and meet leaders for bilateral talks.