Giuffre ‘boasted’ to Maxwell witness of night with Prince Andrew

New York: Prince Andrew could call on one of Ghislaine Maxwell’s alleged victims as a witness in his defence after she claimed Virginia Giuffre boasted to her of a night with him.

The Duke of York, who is being sued for sexual assault by Giuffre, may seek to depose Carolyn Andriano about fresh claims she made of being recruited aged 14 by Giuffre for abuse by the late American financier and convicted paedophile Jeffrey Epstein and his employee and one-time girlfriend Ghislaine Maxwell. 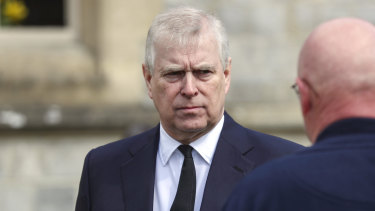 Prince Andrew’s lawyers could call a witness who testified at the trial of Ghislaine Maxwell to aid his case against Virginia Giuffre.Credit:PA/AP

Sources close to the case told the London Telegraph that Andrew, who is still hoping the suit is dismissed before it reaches trial, could seek to use her as a witness to prove Giuffre was not a victim.

The 35-year-old Andriano, who testified last month at Maxwell’s federal trial using only her first name, said she was introduced to Epstein and Maxwell in 2002 by Giuffre, who asked if she “wanted to go make money”. 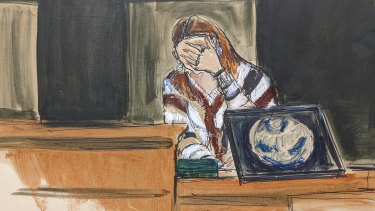 A witness testifying as “Carolyn” breaks down while testifying about her experiences with Jeffery Epstein during Ghislaine Maxwell’s trial in New York on December 7.Credit:AP

Andriano, who was 14 at the time, said Giuffre, then aged either 17 or 18, brought her to Epstein’s house in Palm Beach, Florida, where the pair were greeted by Maxwell.

She said the girls, who were friends from school, were paid $US300 in $US100 bills at the end of each encounter.

Alan Dershowitz, a Harvard lawyer who once represented Epstein, last week formally asked a Manhattan court if he could question Andriano about a similar account she gave at Maxwell’s sex-trafficking trial.

Lawyers for Giuffre defended their client, saying there was no such thing as a “perfect” victim and that Giuffre was a vulnerable young woman abused by predatory older men.

Giuffre has said that Epstein and Maxwell forced her to have sex with public figures, including Dershowitz and the prince, when she was 17.

She asserted that she had sex with Dershowitz at least six times in Epstein’s various residences. Dershowitz is a longtime criminal defence lawyer known for representing high-profile clients including former US president Donald Trump.

Both Andrew and Dershowitz deny the allegations. Representatives for Andrew declined to comment.

Giuffre has previously acknowledged recruiting girls for Epstein, in what has been likened to a pyramid scheme of abuse, claiming she was coerced into doing so by Maxwell.

“Virginia has said for years that her role in facilitating other young women’s involvement is something that she has always regretted. But that fact doesn’t have anything to do with the truth of her allegations,” said David Boies, representing Giuffre.

“Nobody is saying these young, vulnerable girls were perfect in every respect. They were susceptible to the kind of threats they were subjected to and it’s not at all surprising they did things they later regret.”

Giuffre sued Dershowitz for defamation in 2019. He then countersued Giuffre, claiming she had made false claims about him so that she could extort money from a member of Epstein’s inner circle.