How em-bear-assing! Gigantic brown bear tries to make its winter den under Colorado home before it’s tranquilized and takes FIVE rangers to drag away

A gigantic brown bear has been tranquilized and dragged from under a Colorado home as it tried to hibernate there over winter.

The 400lb beast took one dart and five rangers before it could be pulled from the decking in Durango on Wednesday.

Comical footage shows Colorado Parks and Wildlife workers struggle to lug the 10-year-old behemoth from its lair and into their truck for relocation.

It was later zapped with a ‘reversal drug’ that counteracted the tranquilized and it quickly ran off to find a new spot to bed down. 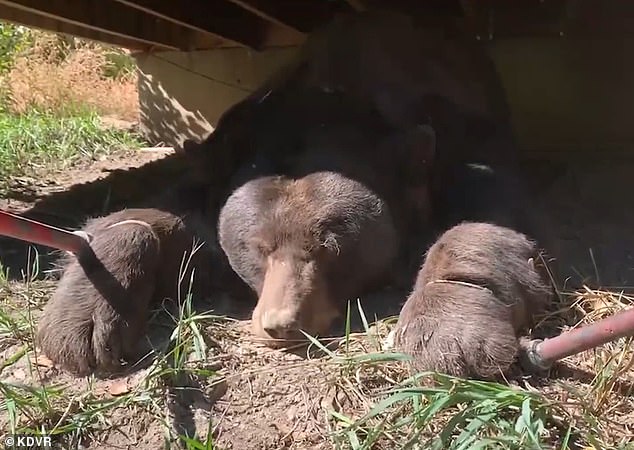 A 400-pound brown bear, who has been dubbed ‘Durango,’ was found under a home in Durango, Colorado. The 10-year-old bear was shot with a tranquilizer dart and five rangers had to help remove him

The bear, which has been dubbed ‘Durango,’ was spotted by mortified residents on Hermosa Avenue in the town.

They called Colorado Parks and Wildlife who raced to the scene and said it was ‘one of the largest male bears we have ever seen in town’.

Rangers shot the bear with a tranquilizer dart before slipping a blue tarp underneath him to aid in removing him from the property.

It took five rangers to move Durango and a video, posted by CPW, shows the men stopping frequently to readjust and take a breather. 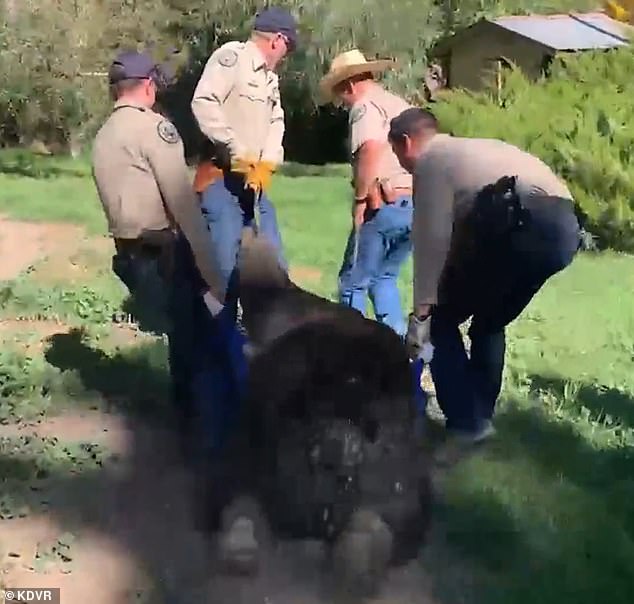 Rangers had to slip a tarp underneath the sedated bear to help drag it off the property. It was later given a reversal drug and came to quickly before being released 60 miles away

The bear was given a ‘reversal drug’ later on to ‘counteract the effects of the tranquilizer,’ and Durango ‘quickly came to.’

Rangers then moved the bear to a new home 60 miles away that was a more ‘suitable bear habitat, [had] good food to eat, and where it is unlikely to encounter hunters this season.’

Durango also underwent a health examination and was equipped with a microchip and ear tags for further monitoring.

CPW is now thanking the community for calling the situation in and helping to make sure to ‘prioritize the safety’ of both the animal and the residents. 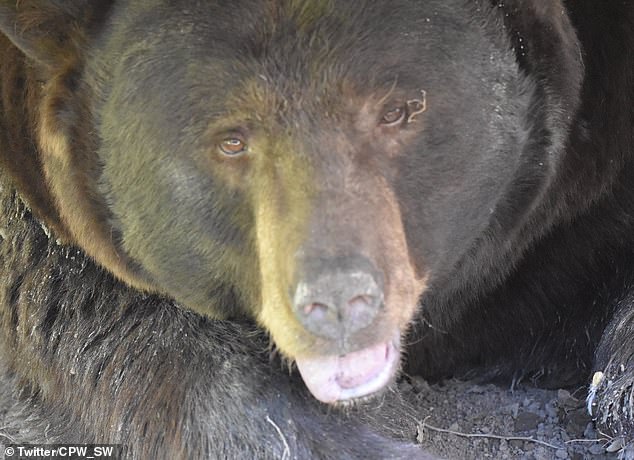 ‘While we haven’t had to handle many bears in the town limits of Durango this year, this highlights the importance of removing attractants around your home as bears look to bulk up before denning for winter,’ CPW wrote.

CPW recommended residents ‘pick up fallen fruit, safely secure trash, and remove bird feeders’ as bears are looking to fatten up for winter.

‘You really don’t want a bear of this size in your yard,’ the agency wrote.

There are an estimated 17,000 to 20,000 bears in Colorado, according to Colorado Outdoors Magazine.

The magazine also recorded that 51 bears had to be relocated in 2021 and 66 were euthanized. 2022 data has not yet been made available. 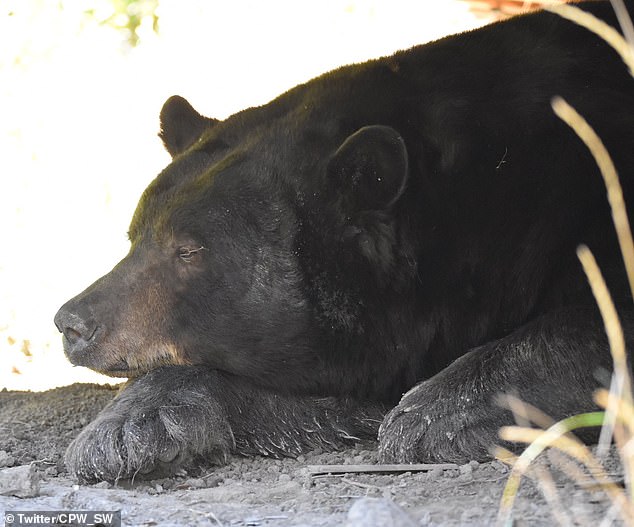 CPW recommended residents ‘pick up fallen fruit, safely secure trash, and remove bird feeders’ as bears are looking to fatten up for winter. ‘You really don’t want a bear of this size in your yard,’ the agency said 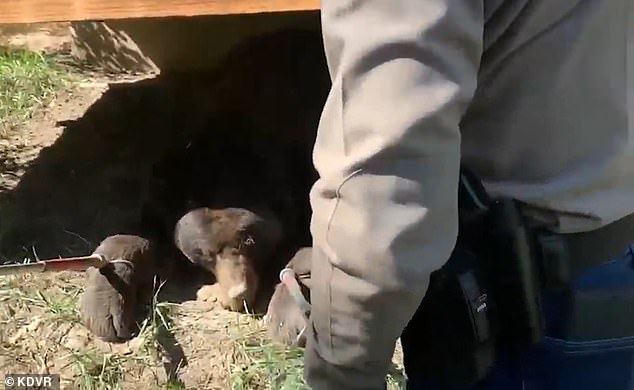