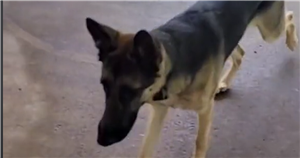 Calling all dog lovers! Sign up to TeamDogs for your weekly dose of dog news, pictures and stories.

A German shepherd has left her owner in stitches when a playful stunt descended into chaos.

Clumsy pooch Sadie Mae, who is approaching her second birthday, was caught on camera showing off some excellent manoeuvring skills with a giant stick.

Sharing on TikTok, Sadie made one foolish mistake and it ended up sending her owner's booze bottles flying off a cupboard.

Sadie is seen approaching her front door in Weldon Springs, Missouri, with a large stick in her mouth, with her owner unconvinced she will manage to get it through the narrow passageway.

But the clever canine bypasses this obstacle with ease, expertly twisting her mouth and the stick to enter the house without an issue.

Sadie’s owner expresses his surprise, sounding rather impressed with his dog’s achievement.

But the elation doesn't last long.

Sadie gets a little over excited, striding forward purposefully with her large branch.

Things start to go wrong for the pup from here, as the stick catches on a table and chest of drawers in the home, knocking over several bottles and leaving glass all over the floor.

If you like this story, make sure you sign up to one of our totally-free newsletter's here.

Sadie panics and flees the scene of the crime, leaving the stick hilariously wedged between table and drawers and bottles strewn all over.

But her owner thankfully sees the funny side of things, letting his dog know that bringing the stick inside was a terrible idea and letting out a chuckle.

The video, which was uploaded by TikTok user @itzwurthit, was a huge hit on the app, with over 5.3 million views and over 756,000 likes.

Viewers were clearly amused by Sadie’s antics, with one user commenting: “Their walk of pride turned into the walk of shame really fast poor pup.”

It's a place where you can share a picture of your dog in our Top Dogs feed and share your doggy advice.

Another commenter wrote: “Hahahaha the reaction is so funny.”

A third added: “She ran away then came back like who did that?”

Sadie isn’t the only German shepherd to have enjoyed fame on TikTok recently, with this pup going viral after his frustration at a baby’s inability to play fetch was caught on camera.

Brody couldn’t quite comprehend why the tiny tot was unable to throw him the ball in the amusing clip.

The two-month-old baby is blissfully unaware what is being expected, much to the German shepherd’s frustration.

“Brody, we have been over this,” the dog’s owner tells him, as the dog throws an exasperated look at the camera as if asking why his new friend won’t play with him.

“He’s too young!” his owner explains, and the unimpressed pup doesn’t look all too satisfied with the excuse.