From the Archives, 1916: Anzacs victorious in the Battle of Magdhaba

OPERATIONS IN THE DESERT

A vivid narrative of the desert fighting at El Arish towards the end of last year, when the Australian and New Zealand mounted division, under Major-General Sir H. G. Chauvel, succeeded in routing the Turks, is contained in an official account of the operations, which had just reached the Minister of Defence. The town of El Arish fell into the hands of the Australians on 21st December, after a brilliant night march across the desert. 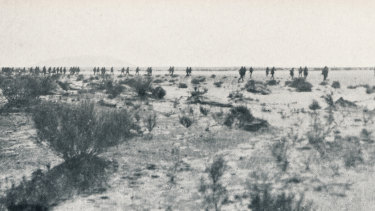 The enemy, evidently considering discretion the better part of valour, withdrew from the position without a stand, and retired to Magdhaba, situated about 20 miles south-east. The following morning General Chauvel was ordered to push on to Magdhaba, where the enemy was estimated to be about 2500 strong, with 8 mountain guns. The division mustered after dark, and moved off after midnight. It was a very cold night but the going proved good.

At 3.50 a.m. on 23rd December the bivouac fires at Magdhaba could be seen, and the column halted at a point which proved afterwards to be four miles from the position. The number of bivouac fires indicated a considerable force, and the brightness of the lights caused the position to seem much nearer than it was, so dismounting the troops, General Chauvel went forward with Brigadiers to make a personal reconnaissance.

As dawn broke, and it became lighter, the bivouac fires disappeared, and nothing could be seen but a thick layer of smoke, which covered the whole valley, so the reconnaissance took much longer than was anticipated. However, the huts in the village were eventually located, as also were some buildings, which afterwards proved to be a Turkish hospital.

Aeroplanes, operating with the Australians, dropped bombs on the enemy, which helped to indicate the position, and at 7.50 a.m. the occupants of an aeroplane reported they had been fired on with rifle and machine gun fire from several redoubts. In the meantime the whole column had been brought up into line of masses, out of view of the enemy and about three miles from position.

At 8.22 a.m. orders for the attack were issued. The New Zealand Brigade (General Chaytor), were to move north of Magdhaba to a point about one mile east, and attack the enemy’s right and rear, cutting off his line of retreat, being responsible for the protection of their own left and rear.

The camel brigade (Smith, V.C.) was to move straight on Magdhaba, with the centre on the telegraph line. The C.R.A was to select a position for the artillery to open on the enemy’s position; the 1st Light Horse Brigade (General Cox) to remain in reserve.

The attack was to commence as soon as the artillery opened fire. Divisional headquarters were moved to a low clay ridge, from which a view of the enemy’s position could be obtained. Aeroplanes constantly dropped messages, keeping General Chauvel informed of the progress of the troops.

The attack commenced at 10 a.m., the Inverness Battery opening fire on two enemy guns, whose position was indicated by the dust on discharge. By this time the enveloping movement of the New Zealand Brigade and 3rd Light Horse Brigade and the camel brigade was advancing towards the enemy’s front.

Their advance was necessarily slow, as it was across a plain absolutely devoid of cover for nearly two miles, and they were exposed to shrapnel fire from the moment they were seen. Their attack was supported by the Hong Kong and Singapore Mountain Battery, which pushed forward most gallantly to well within effective range, without cover of any sort.

At 10 a.m. an airman landed close to headquarters and reported that the enemy was off, and that there was every possibility of his escaping the enveloping move. This information was communicated to Generals Chaytor and Cox, and latter was directed to move straight on Magdhaba at the trot, passing the camel corps on his way.

The enemy opened a fusillade of rifle and machine gun fire on him, at very long range fortunately, which showed the Turks were by no means off. General Cox wheeled away his troops to the right in excellent order, and got into the cover of the wadi with the loss of a few horses killed. The General sent him instructions to move up the wadi, and cooperate with the attack of the camel corps, endeavouring at the same time to turn enemy’s left.

Unfortunately, the R.H.A. could not give a great deal of support, as the observation was singularly bad, and only one of the enemy’s five redoubts could be seen. This was soon reduced, and white flags appeared on it. The trenches in front of it were still strongly held, however, and these and the other redoubts were keeping up a hot fire, so no notice was taken of the white flags. At about 12.30 p.m. the attack appeared to be held up everywhere owing to the ground immediately in front of all the trenches being absolutely exposed.

General Cox reported that he had taken the first bridge head on the Wadi, with 100 prisoners, and that the 2nd L.H. was pushing round the enemy’s left. At 2 p.m., the 8th and 9th L.H. and New Zealand Wellingtons had pushed up to within 200 yards of the village and had joined hands with the Camel Brigade on their right, and Colonel Royston reported the 10th were coming up in the enemy’s rear.

At 3.20 p.m. the 1st L.H. Brigade and the Camel Brigade attacked the second redoubt on the enemy’s left, and about the same time the Wellingtons and 8th and 9th Light Horse had carried the redoubt on the enemy’s extreme right front. At 4 p.m. the second redoubt was carried by the Light Horse Brigade and the Camel Corps, and the New Zealand Canterburys of the 10th charged, mounted, with fixed bayonets, parties of the enemy who were retiring from the redoubt immediately south of the wells at El Magdhaba, which was being attacked in the front by the 2nd Light Horse.

At 4.30 p.m. the whole position had been taken, though firing continued from isolated parties, chiefly from the sand dunes south of Magdhaba, until after dark. The Turks put up a great fight, and in most cases held until the Australians were within twenty yards of them. Only their bad shooting prevented heavy casualties.