Formula 1 tycoon Ron Dennis submits plans for a £30m Berkshire mega-mansion complete with a hair salon, flower room, Roman bath-style underground pool and a tunnel to his boat on the Thames

Ex-Formula One boss Ron Dennis has submitted plans for a £30 million mega-mansion in Berkshire, complete with a secret tunnel, a Roman baths-style underground swimming pool and a ‘resting area’ for his security team.

Dennis, 74, who has three children with ex-wife Lisa and is the Official British Business Ambassador, purchased the land in Berkshire shortly after selling his shares in McLaren for £275 million in 2017.

Now, he appears set on building the most spectacular new home Britain after shelving more modest plans for an ‘elegant country house’.

His proposal includes a salon, flower room and a tunnel that leads to his boat on the Thames. The property will also come with a Roman baths-style underground swimming pool, sauna, steam room and massage room.

More strikingly, he wants to include a room for glassware and crockery, as well as a ‘driver’s resting area’ for his security team.

The huge project, submitted to Wokingham Borough Council, would also see him install an underground car park and car wash.

During his time at McLaren, Dennis, thought to be worth around £450 million, gave seven-time world champion Lewis Hamilton his big break.

He spent 40 years at McLaren but was ousted as chief executive after he fell out with the other shareholders, Saudi-born businessman Mansour Ojjeh and Bahrain sovereign wealth fund Mumtalakat. 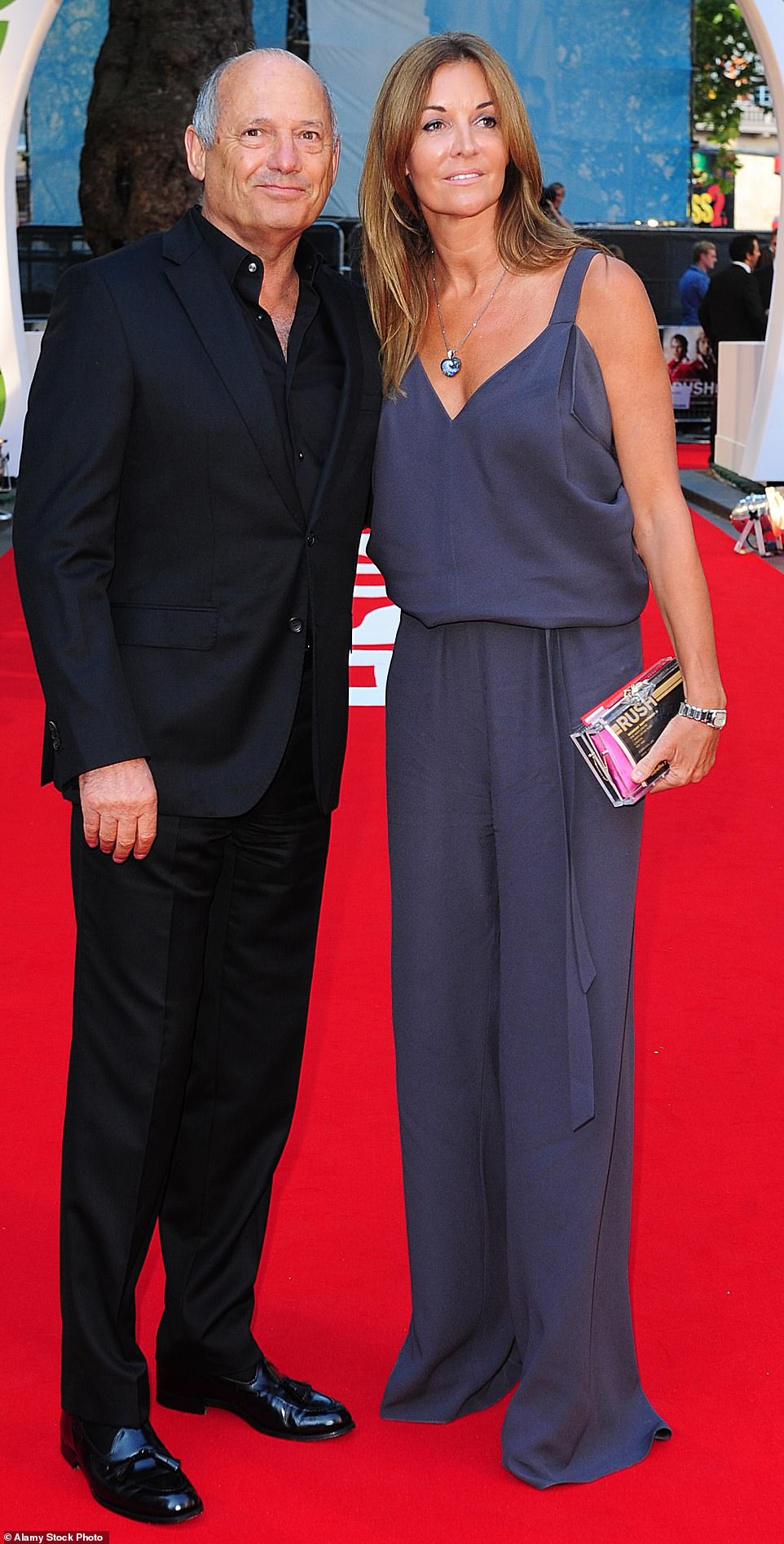 Formula 1 team founder Ron Dennis, pictured with wife Lisa, sold his shares in McLaren for £275 million in 2017 and bought a huge plot of land on which to build a mega-mansion 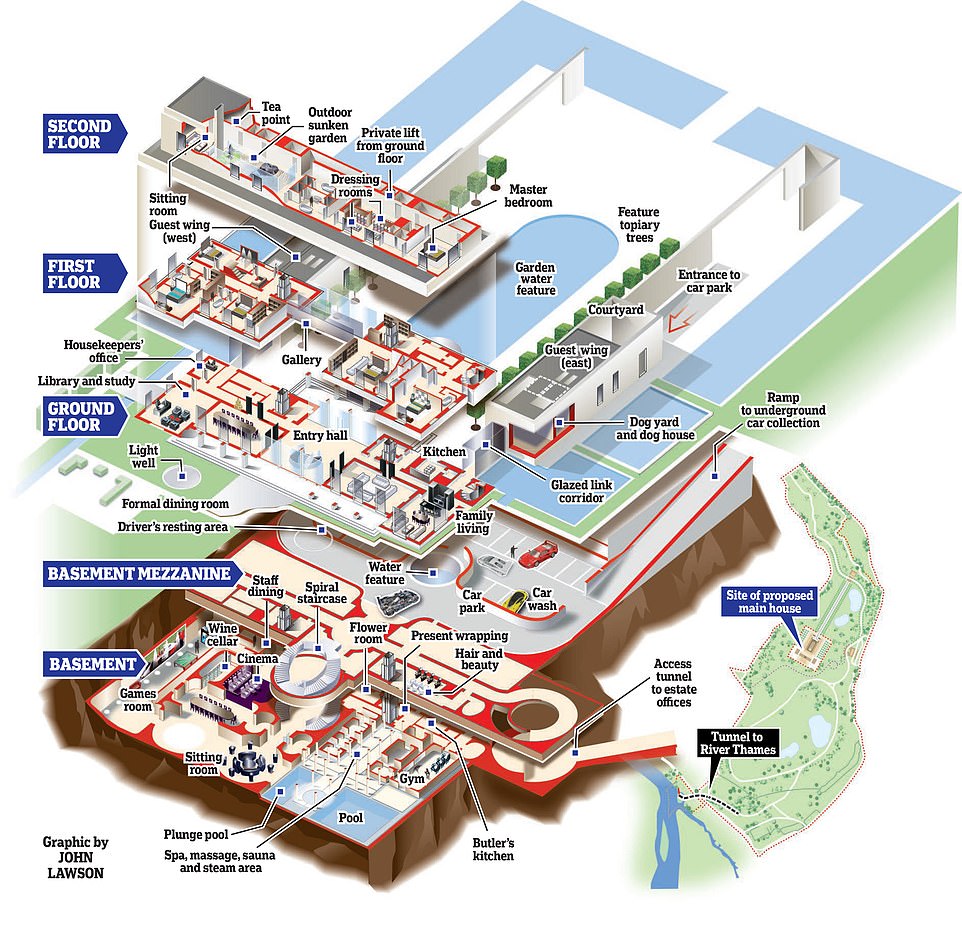 Now, the British Business Ambassador has submitted plans which show he hopes to build the most spectacular new home in England for £30 million 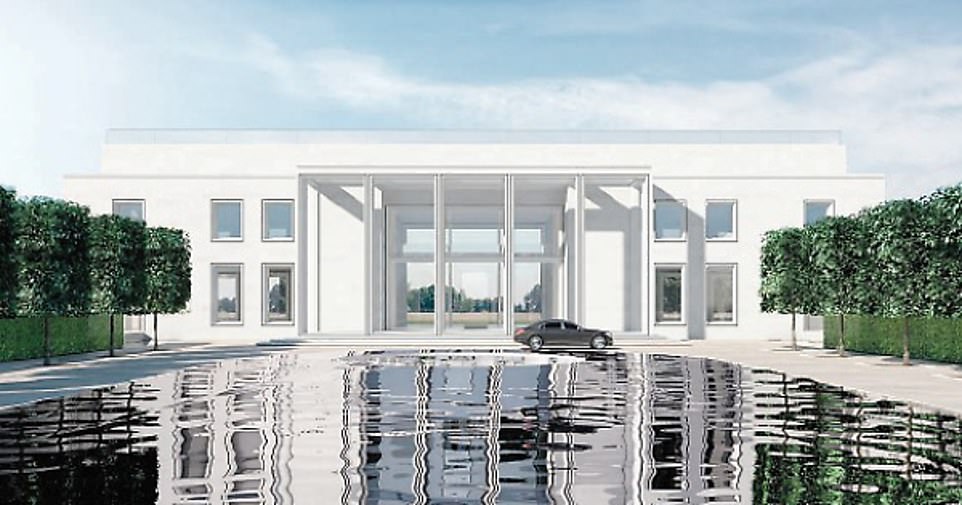 Speaking about his exit, Dennis said: ‘I am disappointed that the representatives of TAG and Mumtalakat, the other main shareholders in McLaren, have forced through this decision to place me on gardening leave, despite the strong warnings from the rest of the management team about the potential consequences of their actions on the business.

‘The grounds they have stated are entirely spurious; my management style is the same as it has always been and is one that has enabled McLaren to become an automotive and technology group that has won 20 Formula One world championships and grown into an £850 million a year business.’

Dennis’s first world drivers’ title came in 1984 through Niki Lauda and the last in 2008 through Hamilton. He developed McLaren’s state-of-the-art headquarters in Woking, Surrey, designed by Sir Norman Foster.

The major blot on his CV was a £100m fine for McLaren having possession of Ferrari documents in what was known as the ‘Spygate’ scandal in 2008.

The leader of Wokingham borough council, John Halsall, told The Times that Dennis’ new proposal comes after he ‘changed his mind’ about a previous application.

The businessman was previously granted permission to build a six-bedroom house with three storeys, a basement, a roof terrace, mezzanine and a large pool. Wokingham borough council will now consider his new proposal.

The plot neighbours what was once the most expensive house in Britain — the 500-acre Park Place estate, which was the home of George II’s eldest son.

Park Place was bought by for £42 million in 2007, before being sold to former Bank of Moscow president Andrey Borodin for £140 million. He was granted political asylum in the UK, after clashing with Vladimir Putin’s regime over supposed fraud charges. 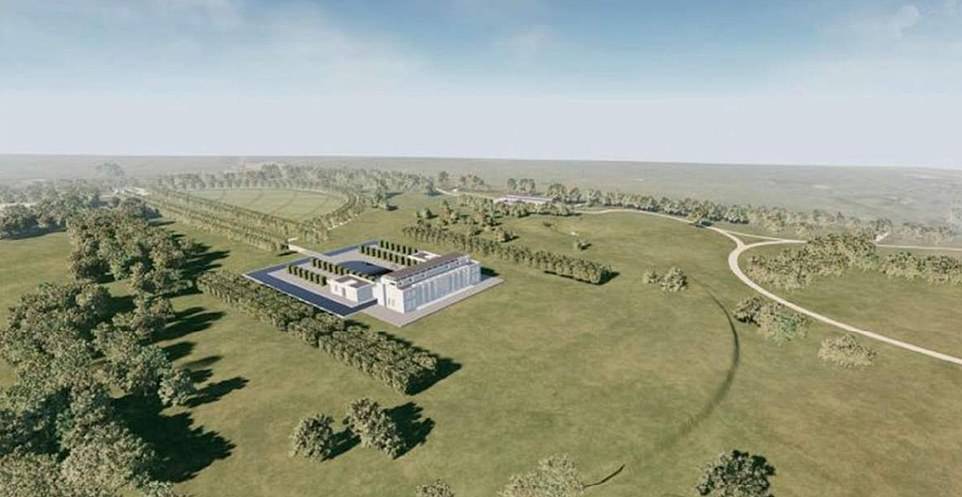 The huge project, submitted to Wokingham Borough Council, would also see him install an underground car park and car wash 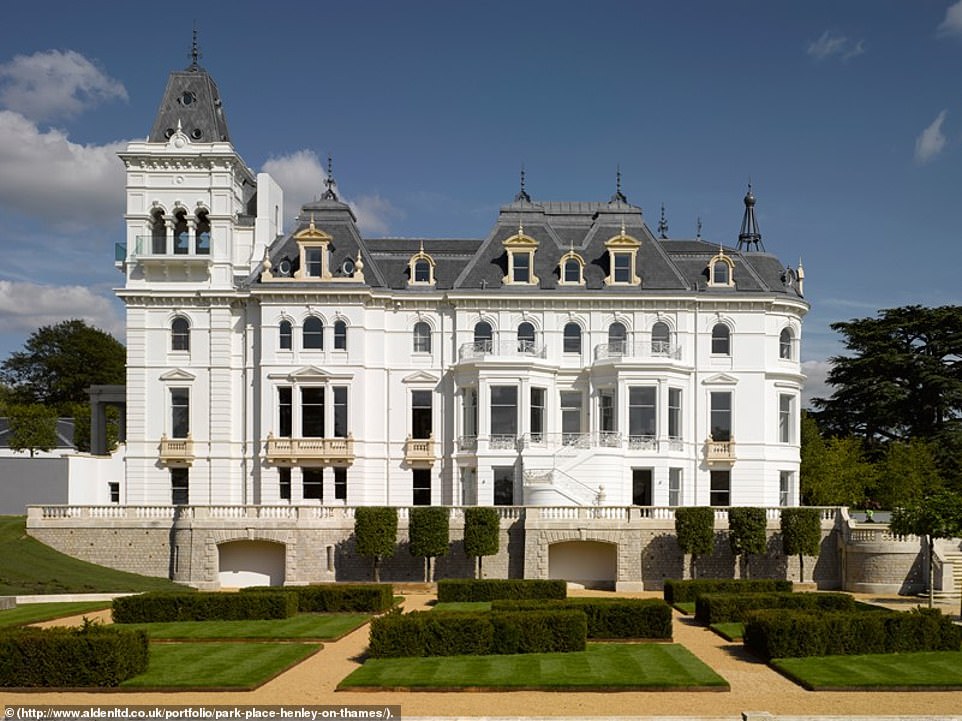 The plot neighbours what was once the most expensive house in Britain — the 500-acre Park Place estate, which was the home of George II’s eldest son

The estate, near Henley-on-Thames, Oxfordshire, was once home to George II’s eldest son, and has been given a makeover worth millions for its mystery new owner.

The mansion, which backs on to the Thames, has a helipad, spa complex, home cinema and  high-tech security system.

Park Place is set in 200 acres of parkland in the village of Remenham, Berkshire, close to the Oxfordshire border. Until 1998 it was used as a boarding school.

The Grade II-listed house, built in the Renaissance style, has at least ten bedrooms complete with en suite bathrooms, and 30,000 sq ft of living space.

Its outbuildings include a barrel-vaulted ‘Grecian grotto’ dating from the 18th century, stables and a boathouse. The property once belonged to Frederick, Prince of Wales. It still has its original stone fireplaces, while some windows still bear ornate stained glass.

The grounds are said to be haunted by the ghost of Mary Blandy, who was accused of poisoning her father in 1752.