Hundreds of administrative errors are being made while documenting the personal details of high-risk returned travellers in Victoria’s hotel quarantine system, resulting in guests having to be re-swabbed and reigniting concerns of another coronavirus escape from quarantine.

The revelation comes from a social worker who was employed in the hotel quarantine system and who alleges he was bullied and dismissed after refusing to fill shifts as a medical scribe alongside nurses who were swabbing guests for COVID-19. He feared he could catch the virus. 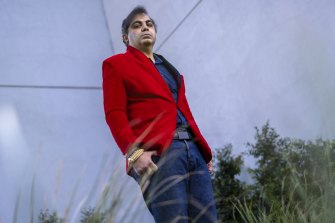 Kevin Shari says he would not have accepted the role as a social worker had he known he would be in such close contact with COVID-19-positive hotel guests.Credit:Wayne Taylor

Kevin Shari, who was employed as a social worker to provide counselling for returned travellers in hotel quarantine from January to July this year, said he repeatedly questioned protocols in the quarantine program after being troubled by the high number of administrative errors he observed.

The 40-year-old said his biggest concern was that an administrative error in one of the “cold” hotels (housing guests who have not tested positive to COVID-19) could lead to a mix-up and the wrong person being identified as having coronavirus and getting transported to a medical hotel, or that another case could be missed.

“I worry they are putting people in harm’s way,” Mr Shari said.

His claims are supported by pages of leaked documents, which include emails and a spreadsheet, obtained by The Age. An extensive list details more than 300 administrative errors made by staff when entering the personal details of returned travellers in the internal database post-swabbing.

The list shows surnames being omitted, the wrong gender being recorded and erroneous hotel room numbers being logged, resulting in some guests having to be re-swabbed.

However, a COVID-19 Quarantine Victoria spokesman said data entry errors were quickly identified, rectified and reported, and had “no impact on the accuracy of the test results and do not pose a risk to the community”.

In an email to all hotel quarantine staff in June, seen by The Age, a manager at Healthcare Australia acknowledged there had been a high number of errors recording guests’ personal details.

“We are now receiving swab error reports form VIDRL [Victorian Infectious Diseases Reference Laboratory] which will assist us in addressing the common issue of gender either being incorrectly or not recorded,” the email reads. “If we can improve on this issue alone – it will dramatically decrease the workload of re-swabbing.”

The Age has also been told by a staff member that some registered nurses working in Victoria’s hotel quarantine system did not have access for several months to a critical internal data entry program that was needed to print out identity labels for COVID-19 tests before the swabs were sent to laboratories.

Breaches of Australia’s quarantine system have increased with the highly infectious Delta variant of the virus. There have been at least 20 coronavirus cases this year when a community infection or an outbreak has been traced back to hotel quarantine.

Mr Shari alleges he was dismissed by Healthcare Australia, which is contracted by the state government to provide medical services in hotels for returned travellers, on July 22 after “months of bullying and harassment”.

Mr Shari, who has no previous experience in infection control, said he and other social workers were asked to work as medical scribes, writing down clinical notes for potentially COVID-positive guests.

He said he did this twice in July – while dressed in full personal protective equipment, including a gown, gloves and face mask – despite flagging concerns about his safety and submitting a doctor’s advice that he should not push a medical trolley due to a severe physical disability in one of his legs.

He said he subsequently refused to assist swabbing nurses at least five times and would not have accepted the role as a social worker had he known he would be in such close contact with COVID-19-positive guests.

“I was employed as a social worker, not as a nurse or doctor,” he said.

He has lodged a formal complaint – seen by The Age – with the Fair Work Commission and Department of Justice and Community Safety over his dismissal.

“Complaints by staff never get taken seriously and no action gets taken. Nothing ever happens,” Mr Shari said.

An email dated June 16 outlined that staff had raised issues about being asked to help swabbing nurses with scribing.

“All RNs [registered nurses] are required to undertake this task as part of their role in the COVID Hotel Quarantine Program,” the email said. “We occasionally call on mental health or social work staff to scribe due to staff shortages and to ensure residents complete the swabbing requirements.”

The Age has spoken to several of Mr Shari’s former colleagues, on the condition of anonymity as they were not authorised to speak publicly, who have backed up his concerns. One described Mr Shari’s treatment as “appalling” and said they had seen him “distressed” on several occasions at work.

Another former colleague separately confirmed that a number of internal bullying complaints had been about the clinical leads and managers employed by Healthcare Australia in the hotel quarantine system.

It is the latest allegation of misconduct to hit Healthcare Australia and comes after another registered nurse, Finny Matthew, who worked across Melbourne’s hotel quarantine program, told The Age he was so shocked at staffing practices he felt “seriously worried about the quarantine system in Victoria.”

Earlier this year, it was also revealed several staff employed by Healthcare Australia had made complaints to WorkSafe Victoria amid concerns healthcare workers were moving between hotels and offices, in a direct breach of the recommendations of an inquiry into the scheme’s failings.

The inquiry, overseen by retired judge Jennifer Coate, was established after security guards on the program became infected with coronavirus and inadvertently spread it into the community, sparking a second wave of infections that led to more than 800 deaths last year.

Georgie Crozier, Victoria’s opposition spokeswoman for health, said the “basic errors” should not be occurring.

“After the Coate inquiry and everything that has occurred in hotel quarantine, this should not be happening,” she said.

A COVID-19 Quarantine Victoria spokesman said the government has “robust systems” in place to monitor service delivery, including testing processes and staffing levels.

“Only registered nurses take and collect testing swabs from residents,” he said. “They are supported by trained staff including patient care attendants, other registered nurses and occasionally other clinicians, such as social workers, who perform a scribing function.”

A spokeswoman for Healthcare Australia said it upheld the highest standards of training and compliance as specified in its contract with COVID-19 Quarantine Victoria.

Reported errors were administrative and had “no impact on the accuracy or results of swab tests”, she said.

She said the company took reports of bullying, harassment or misconduct of any kind “very seriously” but it was not appropriate to comment on individual employee matters.

In March, the state government committed to an overhaul of its hotel quarantine program, including ventilation checks in every room of every hotel used and testing guests four times during a 14-day stay, instead of twice.