Carry on camping! Fans defy tent ban on The Mall to get prime spot for Queen’s funeral… and for some, survival meant whisky and pork pies at 4.30am!

Hardy royal fans defied no-camping rules ahead of the Queen’s funeral today, as people of all ages set up tents, deckchairs and even a makeshift minibar to grab premium seats for the spectacle.

Scores of people began bedding in to line The Mall in central London over the weekend, despite rules – seemingly loosely enforced – preventing people from setting up camp.

Several said friends and family told them they were ‘mad’ to carry out the overnight vigil, but they insisted they would not miss the occasion.

Among them were school friends Christine Manning, 75, and Dianne Donohue, 73, from Leek in Staffordshire, who slept in a pop-up tent.

Mrs Donohoe, a retired housewife and grandmother-of-three, said: ‘Yes, the advice was not to camp but we disobeyed. We’ve had a good catch-up, we’ve enjoyed it. 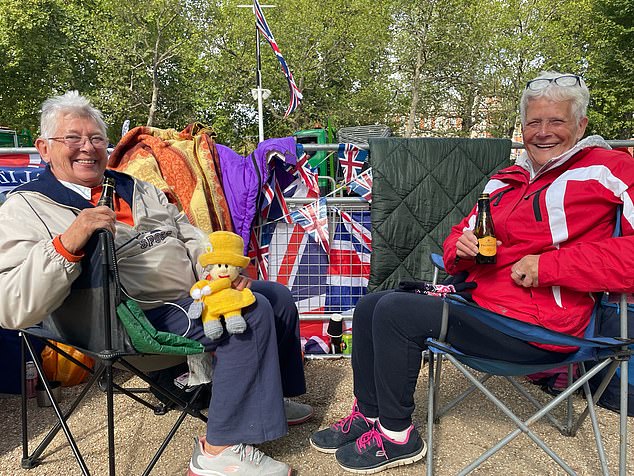 Among them were school friends Christine Manning, 75, (right) and Dianne Donohue, 73, (left) from Leek in Staffordshire, who slept in a pop-up tent

‘We were sleeping in the tent and at 4.30am I woke up and asked Chris if she was awake – she was, so we had a whisky and lemonade and a pork pie.

‘A couple more hours’ sleep, then on to the prosecco. We had to take our tent down at 7am because the police told us to, but we couldn’t do it, so we had to get some lad to help us.

‘We’re out of pork pies sadly but we’ve got sausage rolls, and we’ve got some gin now the whisky’s run out – we’re chipper.’

Miss Manning, a retired waitress, added: ‘My kids said we were mad. Well, ‘mental’ is the word they used. They said we were idiots. I said it had to be done.’

The Mall was a frenzy of activity yesterday, as people arrived to lay flowers nearby, get a glimpse of Buckingham Palace and Horse Guards Parade, and bag their vantage points for the funeral procession as it makes its way from Westminster to Windsor. 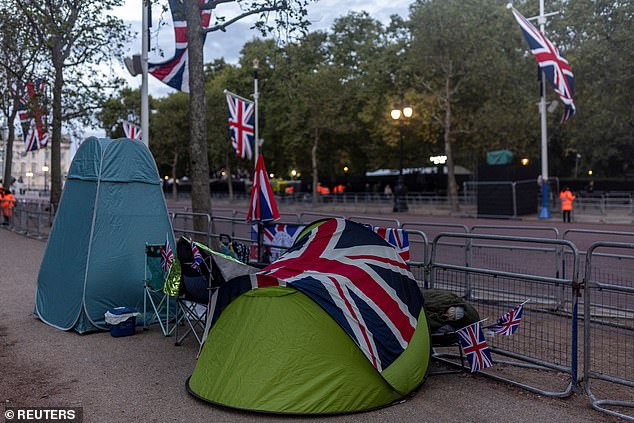 Scores of people began bedding in to line The Mall in central London over the weekend, despite rules – seemingly loosely enforced – preventing people from setting up camp

Tim Thompson, 35, from New Brunswick in Canada, and Charlie Shirley, 36, from north London, also slept in a tent on the Mall.

The pair became friends after sitting next to each other for William and Kate’s wedding in 2011, and resumed their same spot together on Saturday.

Miss Shirley said: ‘We do all the royal events together, it’s like we’re a family.

‘I saw Tim at the Queen’s Jubilee and we said that the next time we see each other would probably be at the Queen’s funeral – we didn’t expect it to be three months later.’

Mr Thompson said: ‘I keep four days’ holiday a year for royal events, so I had to be here.’

American businesswoman Nicole Alford, 40, paid around £1,300 for a last-minute flight to London on Thursday, and said she would camp out until after the funeral. 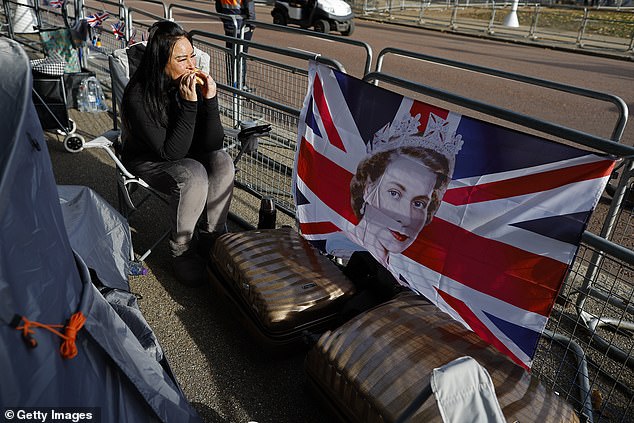 Hardy royal fans defied no-camping rules ahead of the Queen’s funeral today, as people of all ages set up tents, deckchairs and even a makeshift minibar to grab premium seats for the spectacle

She said: ‘You don’t come all this way and then watch it on the TV. I want a front row seat for history.

Semi-retired teacher Ian Rhodes, 66, and his wife Sue, 58, from Alton in Staffordshire, arrived at The Mall at 11am yesterday to claim their spot – although they said they would sleep in deckchairs rather than pitch a tent.

Mr Rhodes said: ‘The only other time I’ve queued overnight for anything was when Stoke City got to Wembley for the cup final in 1972, and I waited overnight at the club shop with my friends to get tickets. People have said we’re mad, but sanity is relative.’

Mrs Rhodes said the couple’s two adult sons had been concerned about their parents ‘roughing it’ overnight in London, but said: ‘I told them we were going to do it anyway – when has their mother ever done what she was told?’

Paulette Galley, from Boston in Lincolnshire, said she was determined to stay on The Mall overnight. The 54-year-old kitchen assistant, originally from south London, said: ‘I might not get any sleep, but I don’t care.

‘She was my Queen, and I want to pay my respects to her. There is no way I wouldn’t be here.’