Victorian authorities say two cases of “stranger-to-stranger transmission” – the existence of which had been used to build the case for the extended lockdown – have been reclassified as false positives.

The two cases related to a woman who was thought to have acquired the virus at a Metricon display homes exposure site at Mickleham, and a male who was believed to have contracted the virus while dining the Brighton Beach Hotel. 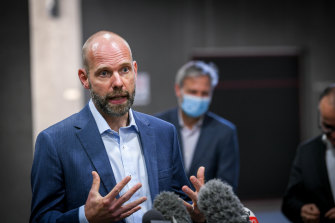 Deakin University epidemiologist Catherine Bennett said she was optimistic the reclassification of the cases could dramatically improve the outlook for the current lockdown.

The Department of Health announced the reclassifications on Thursday night, days after the cases had been used to illustrate how contagious the strain of the virus spreading in Victoria is.

Both cases were reviewed by an expert panel and retesting of the individuals revealed they did not have COVID-19.

The decision will result in a number of primary close contacts being released from 14-day quarantine, it also means exposure sites solely linked to those two cases will be removed, including all the Anglesea sites.

The display home and the Brighton Beach Hotel remain on the exposure list as they had been visited by other positive cases.

Professor Bennett, who is chair of epidemiology at Deakin University, said the reclassifications were notable because the cases had clearly concerned health authorities.

COVID-19 response commander Jeroen Weimar said on Tuesday that health authorities were concerned as some cases in this outbreak had occurred through “stranger-to-stranger” transmission.

“What we’re seeing now clearly is people who are, they’re brushing past each other in a small shop, they’re going around a display home, they’re looking at phones in a Telstra shop,” he said of transmissions linked to the display home, a Telstra store in South Melbourne and a grocer in Epping and Craigieburn shopping centres.

“This is, relatively speaking, relatively fleeting contact. They don’t know each other’s names. And that’s very different to where we’ve been before.”

On Wednesday when discussing the infection of the man at Brighton Beach Hotel, Victoria’s Chief Health Officer Brett Sutton said the pub was well-ventilated and a place that health authorities wouldn’t normally expect transmission to occur, noting it underlined the heightened risks associated with what the World Health Organisation now calls the “Kappa” variant of COVID-19.

Professor Bennett said: “I think that’s going to be very reassuring for them given that this was a key area of concern.

“You combine that with three positive test results coming in today [Thursday] who were in quarantine before they were infectious, then I think that could change the picture quite dramatically.

“Not completely as you always have concerns whether we have complete capture of cases, but given these happen to be the two very cases the Chief Health Officer pulled out. Then I expect he will be very relieved.”

Professor Bennett was unsure if it would result in health authorities shortening the now extended lockdown, but said it would reduce the burden on contact tracers.

“They were quite clear that it wasn’t doing things they hadn’t seen before, just that it was doing them more commonly,” Professor Bennett said.

“These are quite significant results because it was not only tied to where they identified their main concern, it also tied to most of the extra work we thought we needed to do to ensure we had everyone in quarantine that we needed in quarantine before we could safely open.

“So even in an operational sense, that takes some pressure off.”

Professor Bennett expected health authorities would turn their focus to cases like the family of four who tested positive after holidaying on the NSW South Coast.

“The main issue now is this new family of four and, if they link in genomically, how they tie in and whether there is any other sites linked to them,” Professor Bennett said.

“But that is much more doable than having these two other cases that were making them feel anxious that we might be missing other people who had had much more casual exposure.”

The department said any individuals, venues or businesses who were only connected to the two false positive cases needed to wait for formal clearance from health authorities and that work was under way on Thursday evening.

The department apologised for the inconvenience caused to those people and businesses but said it had to act fast when positive cases appeared.

“Moving fast and early to contain and isolate a positive case, and test and trace their contacts is a fundamental part of Victoria’s COVID-19 response,” the Department of Health said in a statement.

“Out of an abundance of caution, the Department will always enact immediate public health measures in response to the notification of any positive cases.”