Facebook Inc has taken down a video by US President Donald Trump in which he said children are "almost immune" to COVID-19, with the company saying it violated its rules against sharing misinformation about the coronavirus.

"This video includes false claims that a group of people is immune from COVID-19, which is a violation of our policies around harmful COVID misinformation," a Facebook spokesman said. 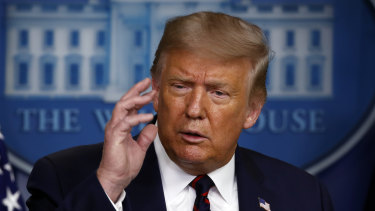 A video US President Donald Trump posted on Facebook has been removed after breaking the site’s COVID-19 misinformation rules. Credit:AP

The video posted included an interview Trump did on Wednesday with Fox News in which he said children are "virtually immune" to getting the COVID-19 coronavirus.

The spokesman said it was the first time that the social media company had removed a Trump post for coronavirus misinformation.

Facebook for months has said it will prioritise removing COVID-19 misinformation that could cause people harm. "This video includes false claims that a group of people is immune from COVID-19 which is a violation of our policies around harmful COVID misinformation," spokesman Andy Stone said in a statement.

Facebook has been criticised in recent months by those who say the company has failed to enforce its information policies against Trump. A third-party auditor said last month that Facebook didn't follow its policies regarding voter suppression by not acting against the President's post in late May that included misleading information about mail-in voting.

Chief Executive Officer Mark Zuckerberg has said that fighting misinformation on COVID-19 is easier than on other topics because the company has reliable sources to help determine what is true, including the US Centres for Disease Control and Prevention and the World Health Organisation.

"Children and adolescents are just as likely to become infected as any other age group and can spread the disease," according to the World Health Organisation website. The CDC says that while children don't appear to be at higher risk for COVID-19 than adults, there are some children who have contracted the virus, and recommends they follow the same social distancing guidelines as adults.

The White House did not immediately respond to a request for comment to the latest video.

In June, both Twitter and Facebook removed a video posted by Trump which was altered to appear as if it had aired on CNN, after receiving a copyright-infringement claim.

The faked video, created by right-wing meme account Carpe Donktum, implied CNN was "fake news" and urged viewers to report "fake news" when they see it.

A few hours after it was posted, Twitter applied a "manipulated media" warning to Trump's tweet, the first time it added that specific tag to one of his tweets. The video on Twitter had been viewed more than 20 million times before it was pulled down.

Last month, Twitter disabled a campaign-style video retweet by the US President, which included music from the group Linkin Park, citing a copyright complaint.

Twitter began challenging Trump's tweets in May and has repeatedly clashed with him since. The social media company has several times disabled or commented on tweets by the President because of what it said were copyright complaints or violations of a policy against threatening violence.

Twitter removed an image the President tweeted on June 30, which included a picture of Trump, because of a complaint from the New York Times, whose photographer had shot the image.

The company also put a tweet from the President behind a warning label in late May, saying that he had violated its rules against "glorifying violence" when he advocated that Minneapolis authorities be tough in responding to protests over the death of George Floyd.

The President's son has also had social media posts removed for violating the COVID-19 misinformation rules.

Last month, Donald Trump jnr’s Twitter account was restricted for 12 hours after he posted a video of doctors talking about the drug hydroxychloroquine.

The video was also taken down by Facebook and Alphabet-owned YouTube after racking up millions of views, for breaking their rules on COVID-19 misinformation.

The tweets shared by Trump were deleted as part of Twitter's enforcement actions.

President Trump also retweeted a post containing a link to the same video and accusing Dr Anthony Fauci, the nation's top infectious disease expert, and Democrats of suppressing the use of the drug hydroxychloroquine to treat the novel coronavirus.

Dollar ticks up after Trump/Biden debate

Can Wind Power Drive Bitcoin Mining in Africa in the Future?
We and our partners use cookies on this site to improve our service, perform analytics, personalize advertising, measure advertising performance, and remember website preferences.Ok