New interactive maps show parts of Scotland getting some of its first doses of snow in a matter of days. The cold weather front will move in as the rest of the UK’s mercury drops from next week. While some may understandably think snowfall predictions are somewhat premature, senior meteorologist at British Weather Services, Jim Dale, said it’s not all that early, especially for the Scottish Highlands. He told Express.co.uk: “It’s the start of all things. Across mountain tops, it is increasingly usual as October unwinds.”

Speaking about its timing, he added: “Not overly, but a tad early. It can happen in any northerly airflow.”

WX Charts, an interactive weather model, predicts parts of Scotland will see small, isolated, snow showers with under 1cm laying, near Fort William on Monday, September 26 by midday. Those escaping the coldest wrath will endure heavy rain instead.

It only shows a very lightly coloured patch, indicative of minimal snowfall, potentially gracing the vicinity of Ben Nevis, the highest peak in Britain, stretching north to Inverness.

In the Scottish Highlands, light snowfall is also predicted to lay east of Portree, in the north west, and further south between Ayr and Kilmarnock. 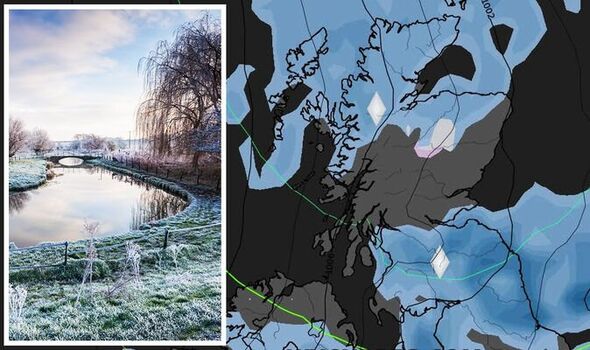 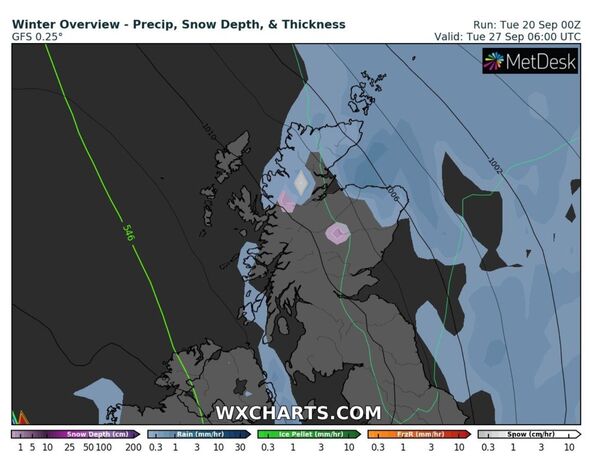 Then, on Tuesday, September 27, slightly deeper snow will settle again on the Scottish Highlands at Portree and at Fort William by 6am. This will however dissipate by the evening, leaving barely anything in trace.

But this does not mean temperatures will immediately recover in these areas, with highs of 4C in central Scotland on Monday, with the mercury struggling to get above freezing the following day.

Much of Scotland will see highs of a measly 2C by the middle of the day on Tuesday. And the picture will be similar across the rest of the UK, albeit slightly warmer.

The mercury will drop to these chilly lows across the north of the country, with places like Liverpool waking up to just above freezing temperatures on Tuesday morning. But the cold weather will also hit the south of Britain too bringing thermometers crashing down to 7C in Essex, Kent and Cambridgeshire in the south east. 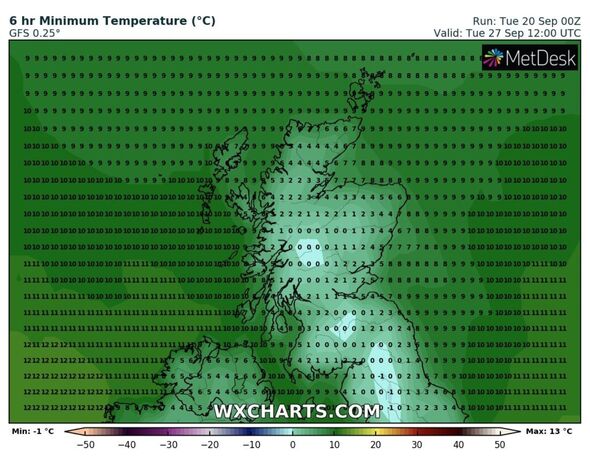 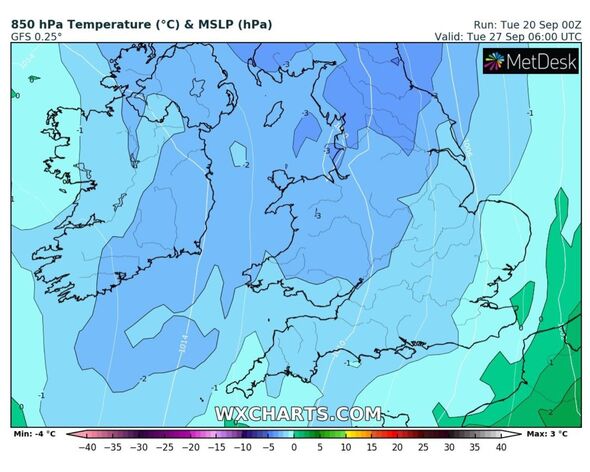 Despite next week’s two-day snow period being predicted, it’s not the first of the season. Patches of snow have been reported on the Scottish mountains Ben Macdui and Braeriach in the eastern highlands earlier this week.

For much of the UK, next week looks to be a tale of two halves – with briskly cold weather being replaced by warmer conditions by the end of the week.

WX Charts maps show the mercury almost recovering back to highs of 15C in the south of England, which is aligned with the sort of conditions the nation has become accustomed to.

The Met Office forecast for this period adds: “During Sunday and early next week, it will probably turn more unsettled with rain and strong winds spreading from the north across many parts of the UK.

“Through the remainder of September conditions are likely to remain changeable with further frontal systems spreading from the west and northwest at times.”

With this in mind, many people will be contemplating putting the heating on, even if just for a quick blast amid the current energy crisis.

But with prices set to skyrocket for approximately 22 million homes, October will not only hail colder weather, but a mighty 6.5 percent increase in gas and electricity bills.

However, one expert has advised switching the heating on once a week for half an hour to mobilise valves that have laid dormant all summer, to avoid any heating problems when temperatures can sit below freezing in mid-winter.