Duchess on line one: Meghan raises eyebrows with political lobbying

Washington: Members of the United States Senate are used to being lobbied by all types of people on all manner of issues. But receiving a phone call from a prominent member of the British royal family – albeit an estranged one – seeking to convince them to vote for a controversial piece of legislation was something new and even shocking.

The US is currently the only advanced economy in the world that does not provide paid parental leave for its citizens. That’s something Meghan, the Duchess of Sussex and an American, is campaigning to change – including by cold-calling senators on their mobile phones.

Meghan, wife of Prince Harry, has raised eyebrows by using her royal title in her lobbying efforts – a break with the tradition that members of the royal family stay aloof from politics. 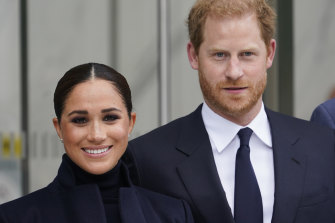 Prince Harry and Meghan, the Duke and Duchess of Sussex, have shown an increased willingness to engage in contentious American political disputes. Credit:AP

Ramping up her public appearances, the duchess has paid an unannounced visit to The Ellen DeGeneres Show for an episode airing at 7am on Friday AEDT.

It will be the first big TV appearance for Meghan since she and Harry gave a bombshell interview to Oprah Winfrey in March to detail their unhappiness at life within the royal family.

Teasers for the show suggest her sit-down with DeGeneres may be less explosive. In a clip, the former Suits actor known in the US as Meghan Markle related an anecdote about her many auditions when she was starting out.

“I had this very old Ford Explorer Sport and, at a certain point, the key stopped working on the driver’s side, so you couldn’t get yourself in through the door,” she told DeGeneres.

“So after auditions, I would park at the back of the parking lot and I would open the trunk and climb in, pull the door shut behind me and crawl all over my seats to get out. That’s how I would come to and fro.”

This push to remain relatable comes as she uses her royal title and political connections to lobby for her causes.

Shelley Moore Capito, a Republican senator from West Virginia, was one of the legislators who recently received a call from Meghan to discuss the parental leave issue.

“I’m in my car. I’m driving. It says ‘caller ID blocked’,” the senator recounted to Politico.

At first Capito thought it was fellow West Virginia Senator Joe Manchin because his calls usually come up as “caller ID blocked” on her phone.

Capito was baffled how the duchess got her number; it turned out that Democratic Senator Kirsten Gillibrand, one of Congress’s leading advocates for paid parental leave, provided it to her.

“Much to my surprise, she called me on my private line and she introduced herself as the Duchess of Sussex, which is kind of ironic,” Collins said, an apparent reference to Harry and Meghan’s attempts to distance themselves from the royal family.

Meghan is more popular in the US than in Britain, where she is currently embroiled in a contentious court battle over a British newspaper’s publication of portions of a letter she wrote to her estranged father Thomas Markle after her 2018 marriage to Harry.

But Collins didn’t appear overly impressed by her intervention.

“I was happy to talk with her, but I’m more interested in what the people of Maine are telling me about it,” she said. 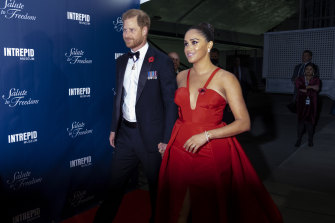 Prince Harry and Meghan arrive at the Intrepid Sea, Air & Space Museum for the Salute to Freedom Gala, last week.Credit:AP

Explaining her approach at a conference last week organised by The New York Times, Meghan said: “I just get the phone number, and I call and have a conversation. People are pretty surprised, I think.”

In October, Meghan wrote a letter to House Speaker Nancy Pelosi and Senate Leader Chuck Schumer, both Democrats, urging them to make parental leave a policy when crafting a massive social spending bill.

The parental leave provision is regarded as dead-on-arrival in Washington because Manchin, also a Democrat and the Senate’s crucial balance-of-power vote, has said he does not support it.

In the letter, Meghan described herself as “an engaged citizen and a parent” while writing under the official letterhead of “The Office of the Duke and Duchess of Sussex”.

“I know how politically charged things can – and have – become,” Meghan wrote to Schumer and Pelosi. “But this isn’t about Right or Left, it’s about right or wrong. This is about putting families above politics.”

In a video message to the Glasgow climate summit earlier this month Harry and Meghan said they were committed to making their joint company, Archewell, net zero by 2030.