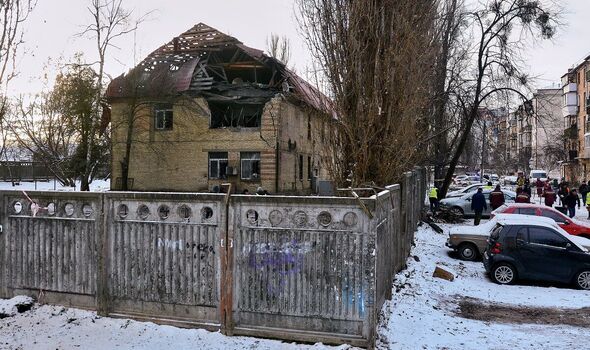 President Volodymyr Zelensky said the “terrorists” fired 13 Iranian-made explosive-laden unmanned aircraft and all were intercepted. The snow-covered capital remained largely calm after the dawn attack, which came in two waves. The all-clear was sounded as the working day began.

Wreckage from the devices damaged four residential buildings and caused a blast at a three-storey tax office in the central Shevchenkyvskyi district. It left a gaping hole in the roof and blew out windows in parked cars and in a neighbouring building.

Clean-up crews were on site quickly to shovel away the rubble and roll out plastic sheeting to cover the blown-out windows in freezing temperatures.

One man, unfazed, pushed his son on a swing set on a nearby playground as the crews did their work.

Anton Rudikov’s family was sleeping when they heard the sounds of an explosion nearby and smashing windows.

“The children were frightened; the windows flew out,” said Mr Rudikov, who has daughters aged 13 and 18.

Local residents said they saw fragments from a drone which contained the words “For Ryazan”.

The Kremlin claims Ukraine was responsible for an attack on a military base in the Ryazan region of western Russia last week.

Russian strikes though continue to cause deaths and havoc, particularly in areas close to the front lines in the east and south. In the southern city of Odesa, drones temporarily shut off the power last week.

US officials are set to approve sending a Patriot missile battery to Ukraine. The most advanced surface-to-air missile system the West has provided in the war follow pleas by Mr Zelensky for better tech.

The head of Mr Zelensky’s office, Andriy Yermak, said yesterday 64 Ukrainian soldiers and a US national Suedi Murekezi living in Ukraine were released in the latest prisoner swap between Kyiv and Moscow.

In a Telegram post, he identified the “US citizen who helped our people” as Suedi Murekezi. Mr Yermak did not elaborate and what, if any, role Mr Murekezi had in Ukraine was not immediately clear.

The International Atomic Energy Agency said it has agreed with Ukraine to “establish a continuous presence of nuclear safety and security experts” at all the country’s nuclear power plants to prevent a nuclear accident during the conflict.