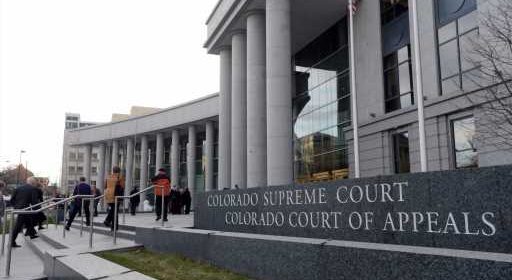 A 37-year-old man whose conviction in a vehicular homicide case was overturned by the Colorado Court of Appeals returned to Adams County District Court on Monday, pleaded guilty and was sentenced to nine years in prison.

Brian Charles White had agreed to a sentence between eight and 10 years as part of his guilty plea in which he admitted he was high on methamphetamine when he drove his SUV into a motorcycle in Brighton and killed 65-year-old David Brown in 2017.

He’d originally been sentenced to 12 years in prison after a jury found White guilty on four counts in 2018, but the Colorado Court of Appeals later threw out that conviction, finding that then-Adams County District Court Judge Tomee Crespin’s jury instructions on reasonable doubt were seriously flawed.

Crespin, who is no longer a judge and claimed she faced discrimination on the job, used a bad analogy to describe reasonable doubt to jurors that essentially conveyed to jurors they should consider the defendant guilty unless proven innocent, the Court of Appeals found when it overturned White’s conviction in late 2021.

“This is backward,” Judge Neeti Pawar wrote. “The jury should presume the defendant is innocent and return a not guilty verdict unless the prosecution’s case is strong enough to dispel any reasonable doubts about his guilt.”

On Monday, White apologized to the family members of the man he killed and said in a written statement that he was committed to living a sober life going forward.

Adams County District Court Judge Jeffrey Smith said White’s new sentence will include credit for the last three-and-a-half years White has already spent in prison and commended White for being a “model prisoner.”

“There still has to be a punishment for what occurred, but as far as the short time I’ve been on the criminal bench, I don’t think I’ve seen anyone who has taken their prison sentence as seriously as Mr. White has done,” Smith said Monday.

This case is one of two headed back to court in Adams County this month after juries’ convictions were overturned because of flawed jury instructions. Brandon Karr, 30, saw his second-degree murder conviction and 26-year prison sentence overturned last year as well.

Karr was convicted of killing one person during a 2016 shootout at an Adams County mobile home park in which two people were killed and two others wounded. Karr and several family members went to a neighbor’s trailer intending to fight a relative’s ex-boyfriend, and arrived to find a large group of people gathered. During the fight, which involved four people, another neighbor emerged from his trailer and fired shots into the air.

The neighbor continued to fire as Karr and his group fled, shooting at their vehicle and killing Karr’s cousin, Dustin Karr, 23. Brandon Karr also fired shots toward the neighbor and into the group gathered for the fight as he fled, killing Edgar Loera Munoz, 30, and wounding two others.

Karr claimed during his jury trial that he fired in self-defense.

The appeals court overturned his convictions and sent the case back to Adams County District Court, where Karr is scheduled to appear Aug. 19 and is set for a repeat jury trial on Sept. 29.