Dirty little secrets behind Pretty Little billionaire: He’s the British fast-fashion tycoon who just proposed to his model finacee with a £1.5m ring – but was slammed over low wages and factories that were ‘breeding grounds’ for Covid

Shoppers complain that the fashion firm’s clothes are flimsy, shoddy and so badly made that they don’t survive more than a few wears.

But contemplating the supercars, yacht and diamonds owned by Pretty Little Thing CEO Umar Kamani, it is clear there’s nothing cheap about his fast-fashion empire.

Manchester-born Kamani, 33, announced his engagement this week to model girlfriend Nada Adelle. And what an engagement it was.

The proposal — in Monte Carlo — was a £2 million spectacle, with every diamond-encrusted and flower-bedecked moment shared on social media — with a videographer on hand to capture every touching moment. 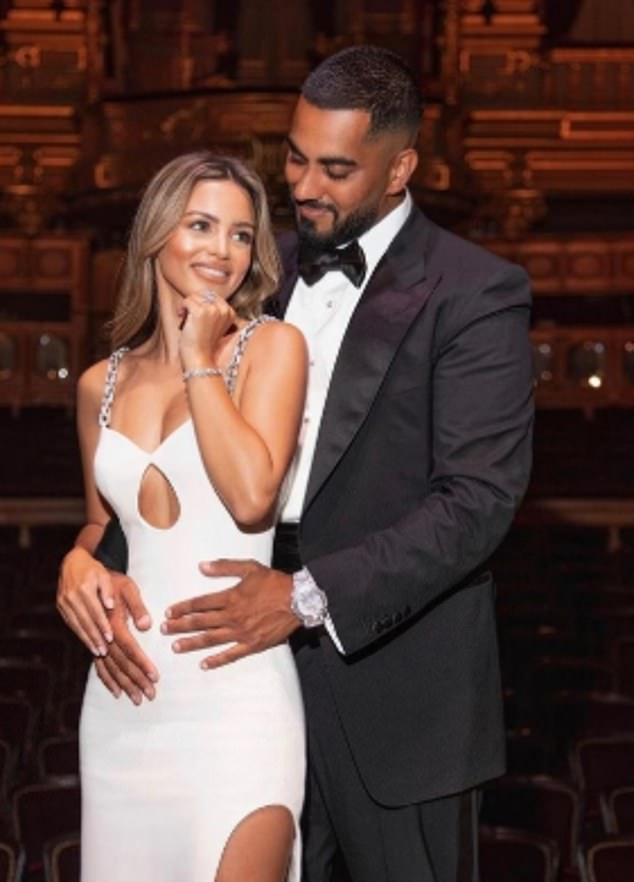 Kamani can afford it. He’s said to be a billionaire, having founded the online teenyboppers’ clothing line Pretty Little Thing in 2012 with brother Adam.

The pair were inspired by the phenomenal success of their father, who founded the Boohoo empire in 2006. Pretty Little Thing has now been sold to Boohoo for £330 million.

So what does this blingy lifestyle equate to in polyester playsuits and factory workers’ wages? ALISON BOSHOFF adds it all up . . .

Over the summer, Kamani has been cruising around the Mediterranean aboard what appears to be a Riva 110ft yacht, which charters for £90,000 a week (pictured below).

He also posted a picture of himself zipping around on a personalised jet ski, worth about £20,000. 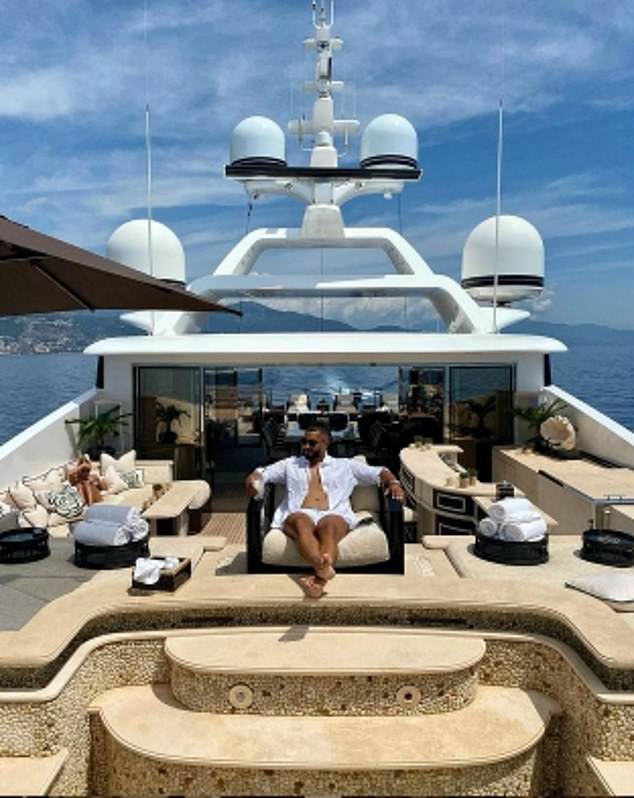 Contemplating the supercars, yacht and diamonds, it is clear there’s nothing cheap about his fast-fashion empire. Pictured: 110ft yacht chartered by Kamani to cruise the Mediterranean

The environmental impact of Kamani’s love of yachts is disastrous. It has been calculated that a superyacht with a permanent crew, pools and a helipad emits more than 7,000 tons of CO2 a year.

To put that into perspective, a return transatlantic flight emits around 5.5 tons of CO2 per passenger.

GREEN CLAIMS GO UP IN FLAMES

In an interview with Vogue Arabia, Kamani said: ‘I don’t agree with the definition of fast fashion as throwaway or disposable simply because of its price.’

He added that the company was ‘committed to responsible sourcing’, used recyclable dispatch bags and never burned unsold clothes or sent them to landfill.

However, many of his company’s clothes may end up in landfill sites anyway, as charity shops apparently decline them because the quality is so poor.

In 2019, umbrella parent company Boohoo was named as one of the least sustainable fashion brands in the UK in a report by the Environmental Audit Committee.

Synthetic clothes are also a major source of micro plastics which have entered the food chain.

Moreover, the boom in throwing away used clothes is in itself a catastrophe — a recent study suggested that three out of every five new garments produced each year are now thrown away. Trends — driven by freebies given to social media influencers — pass within weeks, leading to frenetic consumption, whopping profits (£45 million last year) and a huge amount of waste clothing.

There was an outcry when a mountain of cast-offs outside Accra in Ghana — a major recipient of British second-hand clothing — generated so much methane that it exploded.

Dana Thomas, author of Fashionopolis, says: ‘You may get a $1 bikini, but it costs society a lot. We pay for it in different ways.’ 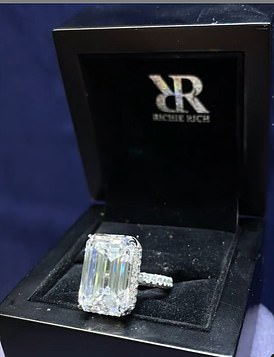 The centrepiece of Kamani’s proposal to girlfriend Nada was a stunning 21-carat diamond ring costing at least £1.5 million.

It was presented to the model and law graduate under the watchful eye of a professional videographer — Kamani has said he has a videographer live with him permanently to record his life on the advice of rapper P Diddy — and a photographer, at the Monte Carlo Opera house.

This had been rented out for the occasion and decorated with 10,000 cream roses and dozens of candles.

An orchestra of 25 musicians played Kamani’s favourite tune — the theme from Disney’s Beauty And The Beast.

The overall cost of the proposal event looks likely to have exceeded £2 million . . .

The price of the spectacle would have been enough for Kamani to have personally paid his staff to furlough during Covid, rather than taking a government hand-out.

Pretty Little Thing announced in May 2020 that it was furloughing 86 UK staff and taking the government grant, which it would top up.

A company spokesman said at the time: ‘We are entering an unprecedented period, and while it is too early to quantify the future impact of Covid-19, we are taking measures to position the business to protect jobs, and keep the business on a strong financial footing in what we expect to be a temporary environment.’

Kamani is a scion of the Cheshire-based Boohoo dynasty. The business, started by patriarch Mahmud Kamani, is now bigger than Marks & Spencer and is said to be worth £5 billion.

Mahmud’s father, Abdullah, a migrant from Kenya, sold handbags on a market stall before founding a wholesale textile business.

Mahmud — then living with his young family in a two-up, two-down in the Manchester suburb of Chorlton — started Boohoo, an online own-branded retailer with rock-bottom prices in 2006.

The company initially had three staff and operated out of a Manchester warehouse.

Boohoo has boomed in the era of fast fashion and recently bought the Debenhams, Oasis and Warehouse brands.

Mahmud lives with his wife, Aisha, in a £2.8 million mansion in Cheshire that was formerly owned by Real Housewife of Cheshire Dawn Ward.

Umar is his flashiest son and he and brother Adam set up the brand Pretty Little Thing when he was only 24.

As you might expect, Umar’s own house is spectacular. It’s an all-white Cheshire mansion believed to be worth £2.5 million and is stuffed with white chairs, white carpets and sparkling chandeliers.

Naturally, there is an indoor pool where he said he had been enjoying an ‘isolationship’ with Ms Adelle during lockdown.

For his 30th birthday, Umar transformed his sprawling mansion into Hollywood — complete with a flashing Hollywood sign in lights — and hosted an enormous party for his celebrity friends. His birthday cake was in the shape of a $100 bill with his face on it.

PLT has now been sold to Boohoo for £330 million, with Umar receiving a £3.4 million dividend.

But the company came under fire for reportedly failing to enforce social distancing at its Sheffield warehouse, leading to a serious outbreak of Covid. Some 28 staff tested positive at what was called a ‘breeding ground’ for the disease.

An independent audit found that parent company Boohoo had prioritised growth and profit over other issues such as low wages and unsafe working conditions.

Alison Levitt QC called the failure to assess the risk to workers during the coronavirus pandemic ‘inexcusable’. However, no laws had been broken by the company.

Boohoo was also criticised for keeping factories running during lockdown when only essential businesses should have been operating.

Concerns were also raised over a factory that supplied Boohoo brands, where staff were reportedly paid as little as £3.50 an hour.

The scandal wiped 40 per cent off the company’s share price last summer. Boohoo promised to terminate relationships with any suppliers who fell short of its code of conduct.

Pretty Little Thing is the most popular of the emerging fast-fashion brands. From 2016 to 2019, the company’s annual sales went from around £17 million to £372 million.

Last year, their sales were £516 million, with 19 million orders placed in total.

Kamani likes to show off to his 1.2 million Instagram followers and has posted images of himself in six supercars this summer.

The jewel in the crown is a limited-edition Ferrari Monza SP2 — the most powerful Ferrari ever produced for the open market. It’s said they are the closest you can get to driving a Formula 1 car. Only 500 were made, and they cost about £2 million. 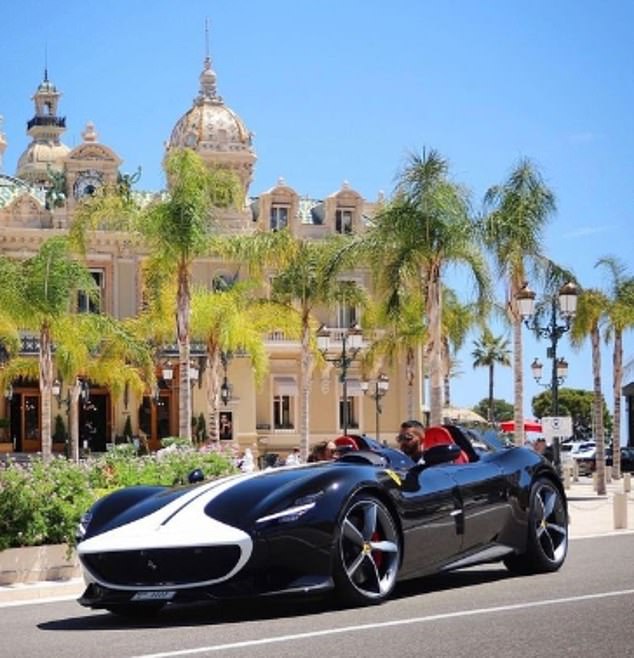 Company cars: Kamani likes to show off to his 1.2 million Instagram followers and has posted images of himself in six supercars this summer. Pictured: Kamani with one of his favourites

He also has two Rolls-Royce Phantoms, a Lamborghini Aventador, a customised Mercedes G-class and a high-end Range Rover.

While the minimum wage for a machinist is £8.91 an hour, the owner of a Leicester factory which supplies Boohoo brands confessed last year that the starting point for workers is just £4 an hour.

It would take a machinist on the minimum wage of £8.91, working a five-day week for 48 weeks of the year, 263 years to earn enough money to buy Umar’s fabulous car collection.

A LITTLE HELP FROM FAMOUS FRIENDS

This spring, Kamani played tennis with former Wimbledon champ Boris Becker in Dubai (top right). He also had lunch with the Crown Prince of Dubai — when launching Pretty Little Thing there.

He sent his best wishes to footballer Sergio Aguero when he left Manchester City and sent birthday greetings to his ‘bro’, rapper Chris Brown.

Pre-pandemic, he hung out with rapper P Diddy at the Grammys and model Kylie Jenner at the Coachella music festival in California. 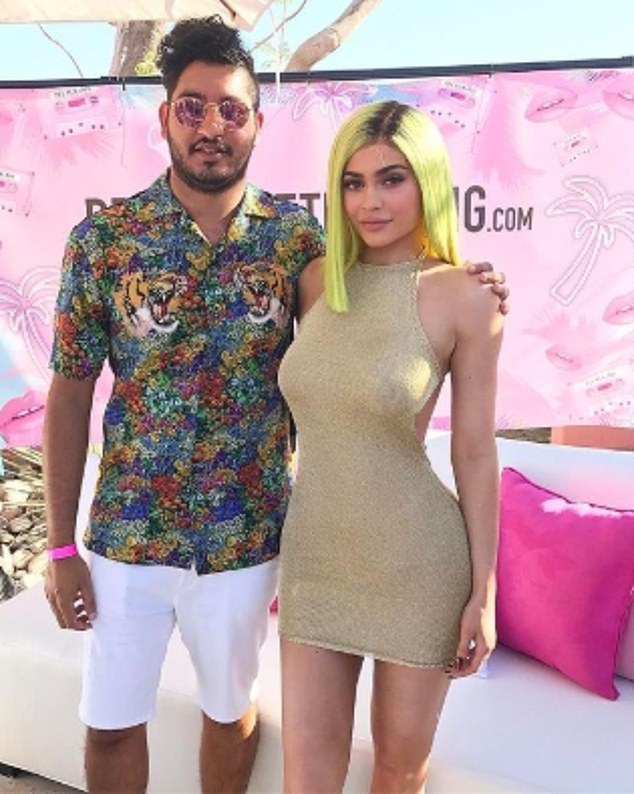 Pre-pandemic, he hung out with rapper P Diddy at the Grammys and model Kylie Jenner at the Coachella music festival in California (pictured, with Jenner in 2017)

He said of his famous pals in an interview: ‘A lot of these people are my friends. Will.I.Am is a really good mate –—we FaceTime nearly every day — as is P Diddy. ‘It’s all about the hustle. I knew I wanted to be in those circles because I’m obsessed with power.’

The business indulges in a hard sell over its connection to the world of celebrities, but has been caught out ‘passing off’ cheaper clothes made by less glitzy brands on their website.

In May 2020, several shoppers complained that items promoted as PLT originals arrived bearing labels from other brands.

A pair of grey joggers, costing £20 from Pretty Little Thing had a Fruit of the Loom label. They could be found elsewhere for £7.

Customers in the UK and U.S. took to Twitter to say how ‘duped and deceived’ they felt.

The company did not make an official comment, but a PLT customer services account explained: ‘Fruit of the Loom is our supplier, so we sell their items.’ 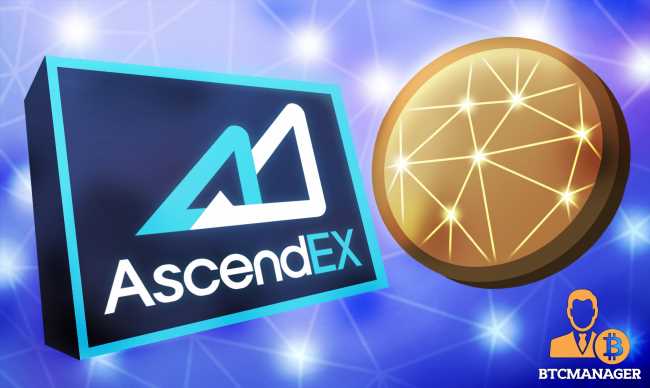