If most people think property developers are evil, and lobbyists are widely regarded with suspicion, then Tom Forrest must be seen as the devil incarnate.

As head of the developer lobby group Urban Taskforce, his job is to advance the interests of the big end of town. It’s not the obvious career path from his previous life as a union official, senior Labor staffer and public servant. And yet Forrest will tell you – as he did over our long lunch – that he still sees himself as representing the battlers on the ’burbs. 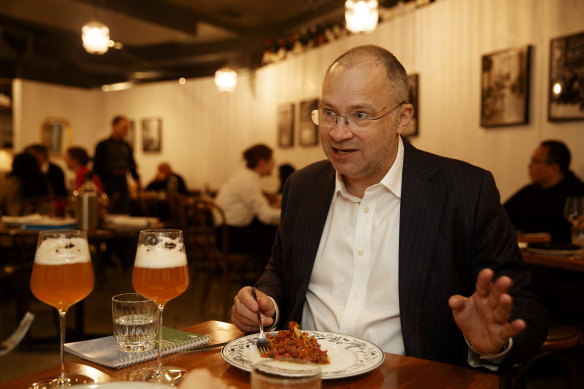 “When public servants in the planning system, well-meaning as they may be, decide to apply things that are fundamentally counter to the productivity of our nation, the people who suffer most from that are the working-class people that I’ve always represented,” Forrest says.

The fast-talking lobbyist is always good for a quote on recalcitrant councils or obstructive NIMBYs, but I’ve invited him to lunch to tease out his more considered views on planning and development.

Despite the cooling housing market, there seems to be growing frustration with NIMBYism and the brakes on housing supply – especially as Millennials age without the means to buy their own home. A few months from a state election, it’s something both sides of politics know they need to engage with and help ameliorate.

We are lunching at Restaurant Leo in the CBD’s Angel Place, near his office. Why? “It’s very, very good Italian food at a price that I thought would be acceptable when published in The Sydney Morning Herald for the image that I want to have,” Forrest says. And what image is that, exactly? “Intelligent. Discerning. Concerned for both image and outcome.” 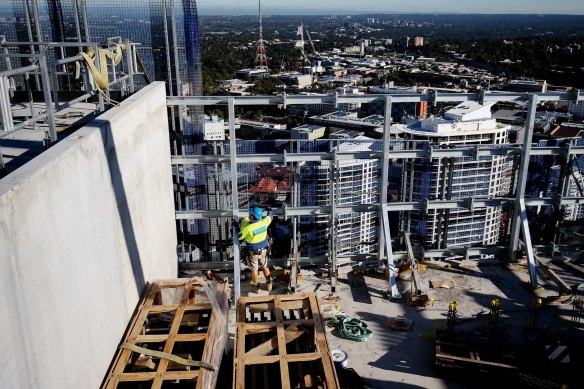 Restriction on housing supply is becoming a hot-button issue especially with Millennials.Credit:Bloomberg

The 54-year-old grew up in low-rise, suburban Epping, which has received a level of high-density development in recent years, but could take a lot more given its big heavy rail and Metro junction. These days he lives in the NIMBY stronghold of Balmain in a heritage sandstone house with views west over Iron Cove (“the working-class view from Balmain”, as he calls it).

Forrest may live a salubrious life these days, but his modest origins still colour his views. He is deeply suspicious of planners and academics, especially if they herald from the north shore or northern beaches – which put him on a collision course with this government’s PhD-holding, Pittwater-dwelling former planning minister Rob Stokes.

“I’ve never liked academic elites who like to foist their views on working-class people without properly understanding what it means,” Forrest says.

Stokes, who will retire at the election, hasn’t been planning minister for nearly a year now, but he still lives rent-free in Forrest’s head – mostly because of a ferocious battle they had over Stokes’ “design and place” environmental planning policy, introduced to improve the liveability and sustainability of apartments and master-planned communities, especially in Sydney’s overheated and growing western suburbs. 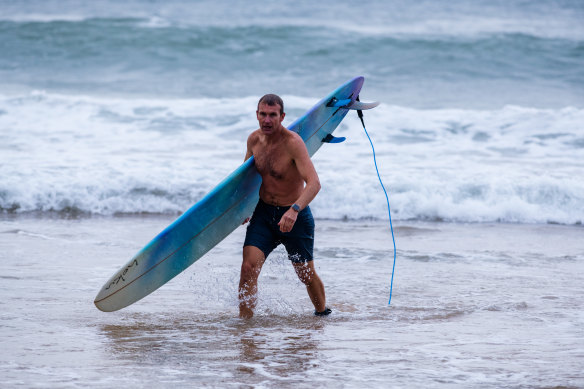 Architects loved it, but developers despised it, and it was scrapped by Stokes’ successor Anthony Roberts after a concerted industry campaign – with Forrest as chief bomb-thrower. Roberts, as it transpires, is more Forrest’s kind of guy.

“You’re not going to have an ethereal conversation about the philosophy of planning systems with Robbo … Robbo is very much more a what-you-see-is-what-you-get minister.”

Forrest sees no need for developers to be subject to the kinds of regulations and standards Stokes wanted to impose. “I felt quite comfortable growing up on the outskirts of Sydney, as it was at the time, with no kerbs, no gutters, certainly no BASIX requirements. That’s how everyone grew up in the 1970s and 1980s.

“This obsession with all this additional amenity and improvements – as if you’re a Philistine if you don’t have them – that seems to me to be arrogant and somewhat inappropriate, and it’s no wonder our houses are so bloody expensive.”

Perhaps it is no surprise, but Forrest genuinely sees developers as a force for social good by putting people in homes – while making money for themselves. He is outraged that “do-gooder” politicians and planners want to force developers to fulfil some other role by imposing rules and regulations for public benefit. The design and place policy was “just another tax”, he says.

“The raison d’etre of a developer is – believe it or not – not to produce community benefit. It’s first and foremost to deliver profit for the investors in that enterprise. It’s not our job to deliver benefits for the community. You’re not supposed to have a tax regime through the design and place SEPP. That’s not the job of the planning minister.”

When Forrest gets worked up, he speaks faster – and louder, to the point that I occasionally glance nervously around the room. Restaurant Leo is fairly reserved, but we are approaching Coogee Pav rooftop levels of excitement.

Forrest’s entrée is “a beautiful example of a steak tartare”, although it wasn’t labelled that way on the menu. “They called it carpaccio, which is the Italian version of cut, seasoned raw beef, but in fact any French person would say: that’s a steak tartare,” he says. 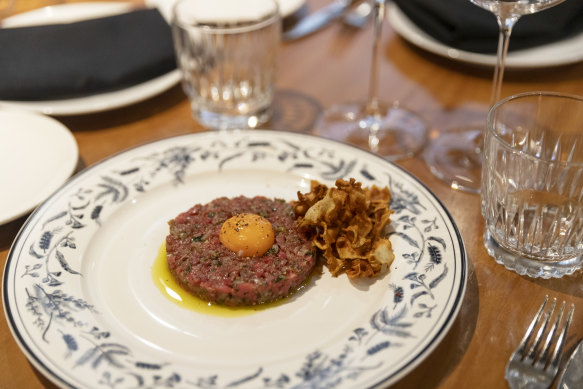 “They called it carpaccio, which is the Italian version of cut, seasoned raw beef, but in fact any French person would say: that’s a steak tartare.”Credit:Nikki Short

My burrata is delicious – probably one the best I’ve ever had – even if I lack the culinary vocabulary of my gourmand companion. We have opted for craft beers to open the batting.

If Stokes is guilty of a bit of academic loftiness, then what of Labor’s Bob Carr, who as premier at the turn of the century famously declared Sydney was “full”? Forrest, who was chief-of-staff to the man who replaced Carr as premier, Morris Iemma, believes Carr’s stint as planning and environment minister in the 1980s coloured his attitude to growth and development.

“Sometimes his focus on environmental outcomes was greater than his focus on economic matters, where he was very much reliant on [treasurer] Michael Egan,” Forrest says. He says the kind of high density centres cropping up around train lines in Liverpool, Blacktown and Bankstown were never contemplated under Carr, but should have been.

And what about Chris Minns’ Labor, which may very well slide into government early next year? Forrest likes that Minns has toned down the anti-developer rhetoric of his predecessor Jodi McKay, and believes Daniel Mookhey would make a “strong and competent” treasurer. But he wants to see Labor take on councils of all stripes and spread the “burden” of increased housing around the city. 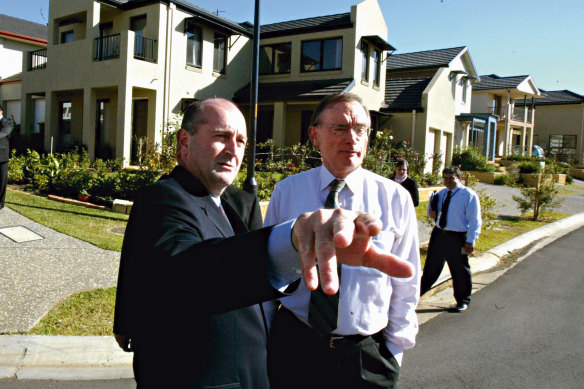 “Everyone has to be equally discomforted. You can’t pick winners and say all the discomfort can go to them and these people over here, they don’t have to worry about it at all.”

For example, Forrest is incensed that Chatswood on the lower north shore hasn’t been forced to accept much more housing despite its excellent public transport links. Don’t be fooled by the tall office buildings: census data shows Chatswood’s population only increased from 21,000 to 25,000 over the past decade – under 2 per cent a year.

Forrest agrees the conversation about density and development is changing. He says it was always going to shift once the housing shortfall started to hurt Millennials trying to enter the market and raise families. But he’s surprised at the lack of political pressure; Millennials might be annoyed, he says, but they haven’t been willing to hit the streets and demand more supply, and too many still think “developers are evil”.

Meanwhile, he warns, the ageing Baby Boomer homeowners who rock up to council meetings and make submissions against new apartment blocks will regret it once they find their future caretakers can’t afford to live anywhere near them. “We’re turning Sydney into a retirement village for ageing NIMBYs,” he says – a line I’m sure he has wheeled out before. 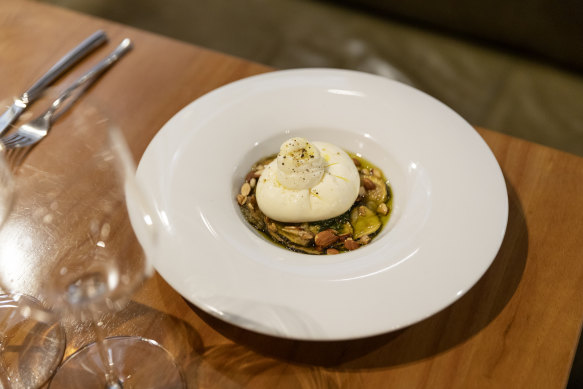 The burrata at Restaurant Leo is excellent.Credit:Nikki Short

We have dawdled with our first course and the afternoon is getting on by the time we’re ready for our mains: a very generous mafalde beef ragu for Forrest, and for me, the Sardinian fregola with mussels, which looked good on Instagram earlier. We’re on to wine now, too, though only by the glass – he opts for a Gembrook Hill pinot noir and I go for an Elena Walch pinot grigio.

It is not surprising that Forrest’s wishlist mostly involves government getting out of the way and letting developers do what they want – to a point. He supports abolishing height limits, and cites central Brisbane, where the city council is more likely to encourage developers to go higher than they planned instead of lower.

“They go ‘but it could be an icon’. It’s entirely the opposite. [They] want Brisbane to be seen as a proper metropolis, not just the third cousin to Sydney and Melbourne.” 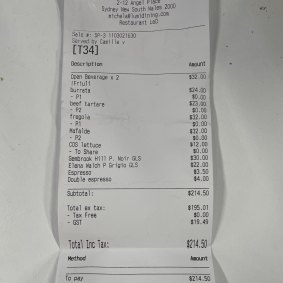 “[Whereas] it’s almost like it’s a privilege for you to be building in Sydney, and you’re going to pay for it. That’s OK in the good times. We’re not in that environment now. We can’t afford to be that arrogant.”

I press the point that one reason developers need regulation is that – as Forrest already conceded – their job is to make money for investors, not to benefit the community. Where is the incentive, for example, to build social and affordable housing unless they are compelled by law?

Forrest has a couple of answers. His main point is that affordability will improve for everyone if government lets the market over-deliver on dwelling approvals and supply.

“Government has created the problem. They know that the population is coming, and they haven’t produced enough DA approvals to produce enough housing, so the price has gone up. Well, whose fault is that? It’s not our fault.”

The volume is reaching fever pitch again. “Suddenly, we’re paying for the failure of government regulation? We’re getting levies put on us? They’re taxing the bread maker because there wasn’t enough bread. It’s stupid!”

That’s all well and good, but what about the people who will never be able to afford a home at market rates? What are developers likely to do for them unless forced by the hand of the state? Somehow, the answer is still liberalisation.

Forrest’s idea is for governments to loosen building controls and allow older office blocks – which may not be needed in this work-from-home era – to be converted to affordable apartments. They might not have balconies or all the bells and whistles mandated by planning policies, he says, “but they are well located near peoples’ workplaces and would be happily occupied”.

His other idea is to give developers a 20 per cent bonus on floor space ratio on the proviso it is used for affordable units. They would have to rent out the units at 25-30 per cent below the market rate for 10 years. Some councils are already considering similar schemes. “No developer wouldn’t do it, they would all do it,” Forrest insists.

In an earlier era, when Forrest was a union official and journalists didn’t have daily deadlines, this lunch would have continued at a pub. Our conversation covered a lot more than housing – Forrest loves old cars, the Sydney Swans and pretty much any ball sport (his father Jim was president of Football NSW for 12 years). Sadly – or perhaps for the best – we call it a day after our espressos.