Melbourne has allowed too many “crap” buildings to be erected, according to deputy lord mayor Nicholas Reece, who says it’s time to end featureless glass towers and monotonous walls that benefit developers but not the public.

The City of Melbourne appointed two panels last week comprising 40 designers and developers that will review applications for architectural merit and quality. Reports from the Design Excellence Advisory Committee and Melbourne Design Review Panel will guide councillors before they give the green light to new developments. 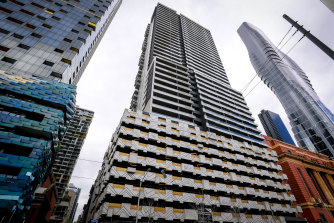 Architect Rory Hyde says the eight storeys of car parking at the Neo200 apartment block at the corner of Spencer and Little Bourke streets is problematic. Credit:Eddie Jim

Councillor Reece said the panels would be a game-changer for Melbourne, which had experienced a building boom over the past two decades. “The truth is we have allowed too much crap to be built. We need to do better. For a city that is in COVID recovery mode we need to build back better.”

The panels would not provide an additional layer of governance or red tape, but offer “light touch” pragmatic advice to improve applications.

“We want to see fine-grain detail, not monotonous glass walls, not featureless glass towers, not spreadsheets in the sky, which is a lot of the development which has come before,” Cr Reece said.

“It makes large profits for the developer but gives nothing back to the city in terms of the community liveability or design standards.”

“It’s surprising and frustrating as an architect because Melbourne’s such a strong architectural city,” he said. “We’ve got great schools for architecture, such great practices, such a great history and heritage and yet we’ve allowed substandard projects to get through in the last 10 or 15 years and hopefully this is all part of a push to rein that in a bit.”

Mr Hyde pointed to the Neo200 building at the corner of Spencer and Little Bourke streets where eight storeys of car parking on the street edge did not allow a “living” city.

He was also critical of City Road in Southbank, which he described as having “Hong Kong-level density with a six-lane highway running through it”, with little provision for the public.

“Some of these buildings are well-designed on their own, but it’s the sum of the parts that adds up to an abrasive part of the city to live in,” he said.

Panel member and Monash University architect Shelley Penn said even the best architects benefited from a fresh set of eyes.

Recent developments including Abode at 318 Russell Street and the A’Beckett Tower at 31A A’Beckett Street had resulted in poor-quality outcomes because of several levels of blank car parks on the street interface, poor-quality materials and blank walls with service panels at street level. 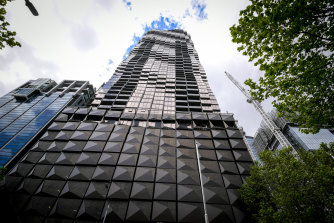 The area surrounding both buildings was “creepy at night” because of the lost opportunity to enable a great laneway experience, making it unpleasant to walk around and less safe, she said.

“In Melbourne we have gone a bit backwards in quality,” she said. “We used to be a leading city for design but some of the recent developments in the heart of the city are awful. For people walking around the streets you should feel delighted and safe that there are ‘eyes on the street’.”

Panel member and architect Georgia Birks said it was important to critique design and the development of design to make sure it was responding to how we live in the city. 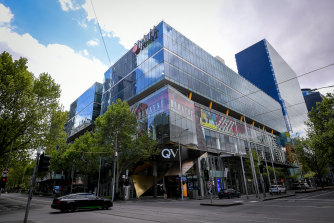 The QV building was noted by panel members as an example of strong architecture that incorporated laneways. Credit:Eddie Jim

She said design and architecture needed to respond to challenges such as climate change, population growth and the coronavirus pandemic, which had all impacted Melbourne.

“It’s a moment for reflection on how we live and how design needs to adapt and respond to what we have all been through,” she said. “Street activation is what brings the atmosphere into the city and that is what we are missing so much with lockdown.”