A DELIVERY driver caused fury when he left a note for a non-tipping customer reminding them he doesn't work "for free".

DoorDash worker Esmond Fountain said if the habitual non-tipper kept it up then they "should pick up [the food] yourself" in a video that's now gone viral on TikTok. 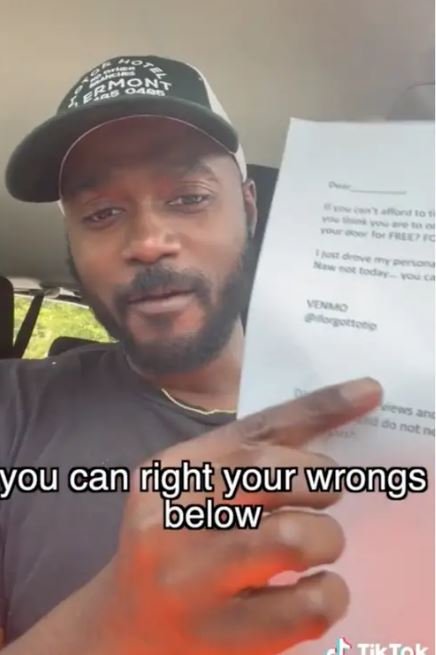 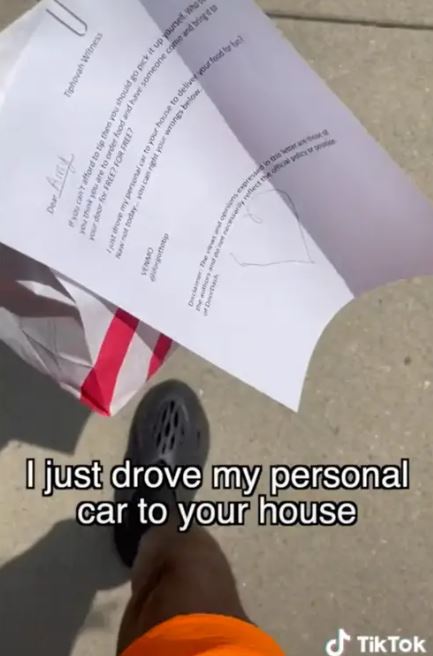 The desperate driver went on: "Who do you think you are to order food and have someone come and bring it to your door for FREE? FOR FREE?"

Fountain left his banking details, adding: "I just drove my personal car to your house to deliver your food for fun? Naw not today… you can right your wrongs."

DoorDash said Fountain's behaviour was "clearly inappropriate" and had "no place" on the food delivery platform.

"We are looking into this incident and will take appropriate action," a spokesperson told Business Insider.

Fountain said he posted the video to "make a statement", according to Business Insider, but unfortunately provoked a nasty debate around tipping delivery drivers.

While some agreed everyone should tip when ordering food, many defended the customer's no-tip approach.

"It technically wasn't free. DoorDash paid you," one person said.

"I never tip. I pay the service fees to DoorDash or UberEats, that's enough. If you don't make enough money then get a new job," another added.

Others asked why Fountain accepted the delivery since DoorDashers are shown the tip before they accept or decline an order.

Fountain said he doesn't usually accept a food run with no tip but decided to this time so he could leave a warning note as a "learning lesson for everyone", he says in the clip. 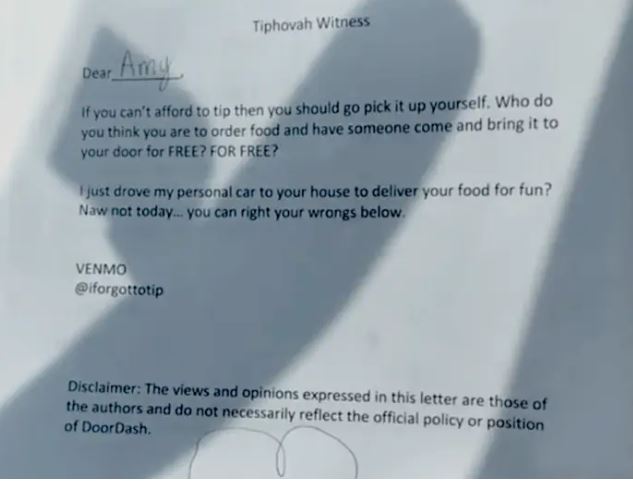 'I JUST WISH PEOPLE KNEW WHAT IT WAS LIKE'

This isn't the first time the plight of poorly-paid delivery drivers has gone viral.

In June, Smithson Michael shared a video of himself crying after he received a $1.19 tip on food that took an hour to drop off.

"I just wish people knew what it was like", Michael says as he sobs in a video posted on TikTok.

"I wish they understood what it was like to drive for these services."

Delivery drivers want customers to know that tips contribute to the majority of their pay.

Fountain says that was ultimately his goal the video.

"I hope that people see the other side of things and see what it looks like to drive 10 miles and wait in an understaffed restaurant to deliver an order for $2 and no tip."