It is inevitable that senior members of the Royal Family must live a part of their lives in the public gaze. In a constitutional monarchy, it simply comes with the territory.

For someone coming into ‘The Firm’ from the outside, the constant scrutiny can no doubt be overwhelming, especially in the age of social media.

Some, such as the Princess of Wales, adapt and embrace their role. By contrast, the Duchess of Sussex decided she was unable and unwilling to accept the strictures that go along with this life of pageantry, palaces and privilege. 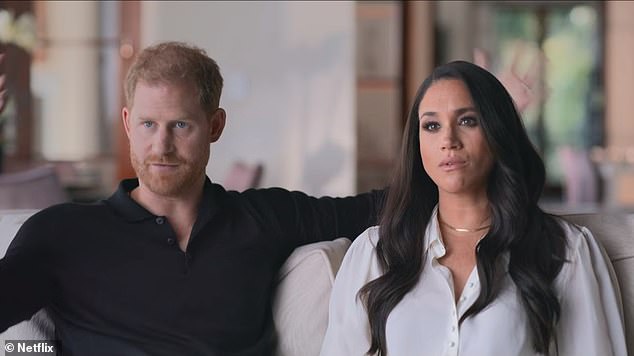 If they loathe the monarchy so much, why not voluntarily give up their titles? They won’t because that would mean losing their meal ticket

But viewers who watched the first three episodes of Harry and Meghan’s money-spinning Netflix documentary were left clear about the reason why.

The pair were forced out, they said, by an unfeeling royal establishment, a predatory media and a Britain riddled with racism (although not before they had enjoyed a £31million wedding on the taxpayer).

The film is earnestly billed as their ‘truth’. Whether it is the whole truth is, of course, another matter entirely.

Certainly, there is no counter-narrative to the Sussexes’ self-indulgent tale of grievance and victimhood.

And let’s face it, time and again the rebellious royals have been caught peddling exaggerations and distortions in interviews. Even the trailer for their documentary involved phony footage.

While there has been precious little in terms of explosive revelations, this is little more than a hatchet job from start to end. 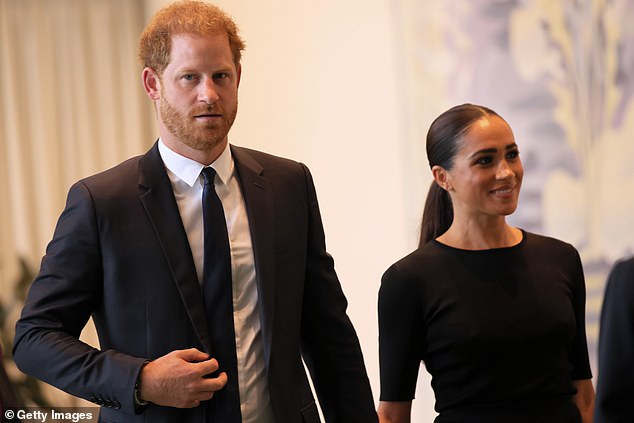 The reality is, this country was captivated by Meghan and thrilled she married Harry. The dream soured only because of their manipulative narcissism and hypocrisy

The couple rail against supposed racism in the Royal Family. Yet no one did more than the late Queen to promote love and understanding between people of different races and cultures, and yesterday King Charles was greeted rapturously at an Ethiopian church in London.

But there is never an axe small enough for this paranoid couple not to grind. The barbs at Harry’s brother and his wife were unkind, while the duke’s attempt to elevate Meghan to the saintliness of his mother, Princess Diana, will jar with many.

The documentary’s portrayal of Britain as a hate-filled and intolerant backwater is a grotesque travesty of the truth. We are one of the most open, tolerant societies in the world. The reality is, this country was captivated by Meghan and thrilled she married Harry. The dream soured only because of their manipulative narcissism and hypocrisy.

Rather than enjoying the privacy they claimed to desire after breaking free of the gilded royal cage to sink their toes into the California sand, they have instead pursued a vendetta against the monarchy and this country.

What is so infuriating is that the Sussexes continue to make millions out of their royal connections while trashing the institution that sustains them. If they loathe the monarchy so much, why not voluntarily give up their titles? They won’t because that would mean losing their meal ticket.

In her first major speech in 1947, the soon-to-be Queen declared that her whole life would be devoted to public service. How deeply sad that her grandson and his wife are dedicated only to serving themselves.

In the land of fudge and fence-sitting, Labour has been careful not to say where it stands on the strikes plaguing Britain.

Is the party with the public who face a winter of discontent? Or their union paymasters? Yesterday they let the cat out of the bag. If Labour wins power, it would rip up existing laws that curb industrial action.

The only workers Labour cares about are the few who belong to the big battalions of the unions – not the millions of strivers who can’t get to their jobs because militants have shut the country down.