Cyclist, 27, who sexually assaulted 10 women and two girls over two days because he was ‘angry’ at them for wearing Lycra is jailed for three years 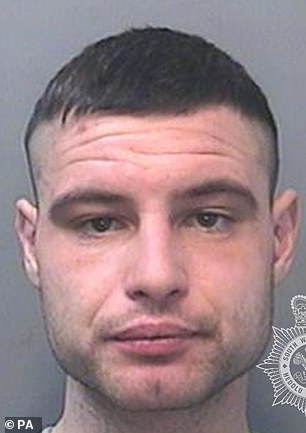 Oliver Smith, 27, (pictured) who sexually assaulted 10 women and two girls over a two-day period because he ‘got angry’ at them for wearing Lycra has been jailed for three years at Swansea Crown Court

A man who sexually assaulted 10 women and two girls over a two-day period because he ‘got angry’ at them for wearing Lycra has been jailed for three years.

Oliver Smith, 27, would cycle up to his victims as they were out jogging or walking and grab their bottoms before riding off.

The offences took place on February 12 and 13 this year in the Swansea area, with eight of the attacks happening in just four hours.

Dean Pulling, prosecuting, told Swansea Crown Court there were 18 victims in total – aged from 12 to 45 – including one woman who was assaulted twice and others who were with their children.

‘At the time of the offences the defendant was wearing dark or black clothing with a hood pulled over his head,’ Mr Pulling said.

‘The offences were committed during lockdown and when the victims were taking permitted exercise or essential business, such as going to work or the shop.

‘The fact they were assaulted at that time when there were heightened concerns regarding coronavirus and social distancing only served to increase the stress and fear that they felt at the time.

‘The attacks that weekend received significant media publicity and these sexual assaults committed in public places, seemingly random attacks against women and girls, brought widespread fear and anger amongst females in Swansea.

Smith was arrested following a police appeal after being recognised by a former school friend, and admitted his crimes.

‘He told police he gets angry about females wearing Lycra,’ Mr Pulling said. ‘He claimed he targeted females who had short jackets on and whose bottoms were visible. In his view it wasn’t fair that men had to see that.

‘He said he felt bad seeing some of his victims crying and felt that all females dressed to entice men.’

Smith told police he carried out his first attack in December last year and thought he had assaulted around 15 women.

Smith, of Glanbrydan Avenue, Swansea, also asked for seven other offences of sexual assault by touching to be taken into account for sentencing. 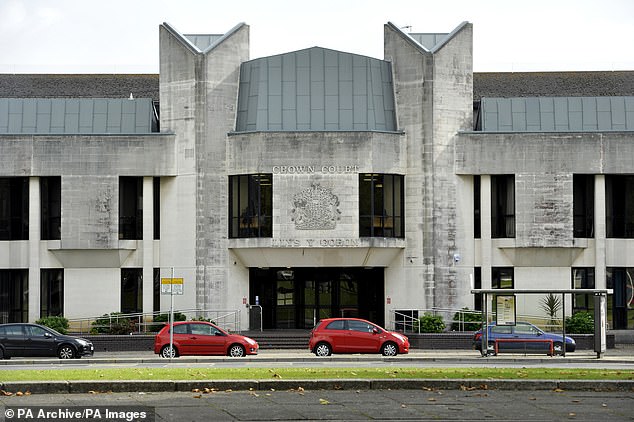 Dean Pulling, prosecuting, told Swansea Crown Court (pictured) there were 18 victims in total – aged from 12 to 45 – including one woman who was assaulted twice and others who were with their children

Gerard Cullen, defending, said a psychiatrist believes Smith was exhibiting signs of autism but is refusing to undergo an assessment.

‘The theme that runs throughout the pre-sentence report and the psychiatric report demonstrates what can only be described as very bizarre ideas, ideology and thinking on behalf of Mr Smith,’ he said.

‘It is true to say he does suffer from very rigid thinking and some very odd ideas about how females should dress in public.

‘I have sought to get through to Mr Smith that really those sort of ideas he is entitled to have but what he is not really entitled to do is act on those ideas in the way he has.

‘This is so out of character and I cannot refer to it as a moment of madness. It started in December and in February he went on a spree.’

Judge Guy Walters jailed Smith for three years and placed him on the sex offenders register for life and imposed an indefinite sexual harm prevention order.

‘This is, by anybody’s standards, a very unusual case,’ he said. ‘From, it seems, December last year and most significantly on February 12 and 13, you systematically sexually assaulted your victims.

‘It really has to be described as a campaign of sexual offending, which caused widespread terror at the time to women in and around the Swansea area.

‘Whilst the touching in this case involves the grabbing of the buttocks and nothing beyond that, you will have heard this morning the accounts of your victims as to the profound effect it has had upon them.

‘Many speak of the sense of violation of you having assaulted them in that way. Some have described profound effects which continue to this day.

‘You plainly over those two days went out specifically to do this. You were wearing a hoodie, dark clothing, hood over your head, and using a bicycle to cycle up to your victims and make a quick getaway.

‘The psychiatrist takes the view that your offending is not born out of any psychiatric illness, albeit you do possess some bizarre ideology; I can’t personally claim to fully understand that.’

Detective Inspector Gareth Jones said: ‘Oliver Smith’s offending has caused his victims significant fear and distress and I hope this sentencing brings them some comfort and shows the seriousness of his actions.

‘Everyone has the right to go about their life without being harassed or assaulted.

‘I praise these women and teenagers for coming forward and speaking to police.

‘South Wales Police will not tolerate sexual abuse in any form, and we will do all we can to bring perpetrators to justice.’