Priti Patel’s plan to crack down on migrants with end to misuse of slavery laws are being thwarted by civil servants, source says

Plans to crack down on illegal Channel migrants are being blocked by civil servants, allies of Priti Patel warned last night.

The Home Secretary has drawn up proposals to end the misuse of modern slavery laws by economic migrants claiming to have been trafficked abroad.

Sources said she aimed to close a loophole in the law that has been exploited by hundreds of migrants from Albania this year. The plan was due to have been introduced as an amendment to the new Modern Slavery Bill this month.

But allies of Miss Patel told the Mail that the plans have been ‘sat on’ by senior Home Office officials opposed to the change. One source claimed the proposals had been personally blocked by the Home Office’s permanent secretary Matthew Rycroft.

The source said: ‘The civil service has invented this thing called a “caretaker government” since the PM was forced out and has downed tools on everything it doesn’t like. The public would be horrified to see the way officials have been exploiting the political situation to kick vital reforms into the long grass.’ 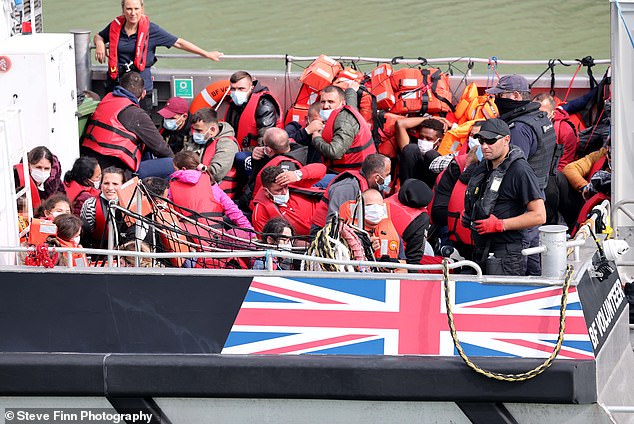 Up To 200 migrants including babies and children are brought into Dover (above). Plans to crack down on illegal Channel migrants are being blocked by civil servants, allies of Priti Patel warned last night

It comes as figures showed 960 migrants reached Britain on Saturday – one of the highest-ever daily totals – bringing the number since the start of the year to 26,224.

Hundreds more migrants – potentially as many as 900 – arrived yesterday, with the final number due to be officially confirmed later today.

If conditions remain calm in the Channel, the record 28,526 arrivals in the whole of 2021 is likely to be surpassed this week. Home Office sources have said that between 40 and 60 per cent of the occupants of each Channel boat now come from Albania.

Despite the Nato member state not seeing conflict for 25 years, the number of Albanian migrants has rocketed as people traffickers sell false hope of a better life in the UK. Another source said: ‘The modern slavery laws are well meaning… but I don’t think anyone could have foreseen the level of abuse and bureaucracy they would entail. 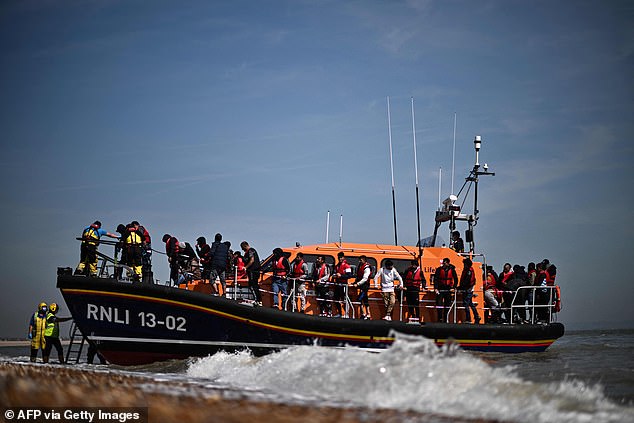 Migrants, picked up at sea attempting to cross the English Channel, are helped ashore from an Royal National Lifeboat Institution’s (RNLI) lifeboat at Dungeness on the southeast coast of England on 15 June 2022. The Home Secretary has drawn up proposals to end the misuse of modern slavery laws by economic migrants claiming to have been trafficked abroad

‘It is now a well-known tool for specialist immigration lawyers. In the same way that people are asylum shopping, we are now getting a lot of economic migrants claiming to be victims of slavery because it is easier to do it in the UK than in other countries.

‘Unfortunately there are people in the Home Office who are wedded to the current system, despite its flaws. All work on the legislation has been blocked by officials this summer – they are playing for time in the hope that they can kill it off.’ Provisions in Theresa May’s Modern Slavery Act allow arrivals in the UK to stay if they have been victims of trafficking abroad.

A Whitehall source said arrivals only have to clear a ‘very low bar’ to win the right to stay for 30 days while they assemble evidence to prove their case. The source said many then disappear into the black economy. An internal Home Office review ordered by Miss Patel proposes tightening the law to permit claims only from those who can show they have been trafficked.

Liz Truss is expected to appoint a new Home Secretary if she takes power this week, and allies of Miss Patel fear the work will then be ‘buried’ by the civil service.

Last week she agreed a new fast-track returns system with the Albanian government following a sharp rise in the number of citizens of the country reaching the UK.

An ally of Miss Patel warned that reform of modern slavery laws was vital in making the deal with Albania a success.