China launches live-fire military drill off the coast of Taiwan

China has launched its biggest ever live-fire military drill off the coast of Taiwan as its warships encircle the island nation.

The country began war games in the waters around Taiwan earlier today in a show of force that signifies increased tensions in the region.

It comes after a visit to the island by US House Speaker Nancy Pelosi, a move that infuriated Beijing, which views it as part of its territory.

Pelosi, who is second in line to the presidency, left Taiwan yesterday after days of threats by China, which vowed ‘punishment’ for her visit.

While she was in the country, Chinese military warships moved to encircle the island, with Beijing claiming it is the ‘victim’ of ‘provocateurs’.

Taipei has warned that it ‘won’t back down’ as it aims to ‘uphold the principle of preparing for war without seeking war’.

The exercise straddles international shipping lanes that are vital in the supply of semiconductors and electronic equipment heading from East Asia to the rest of the world, and is expected to encroach into Taiwanese territorial waters. 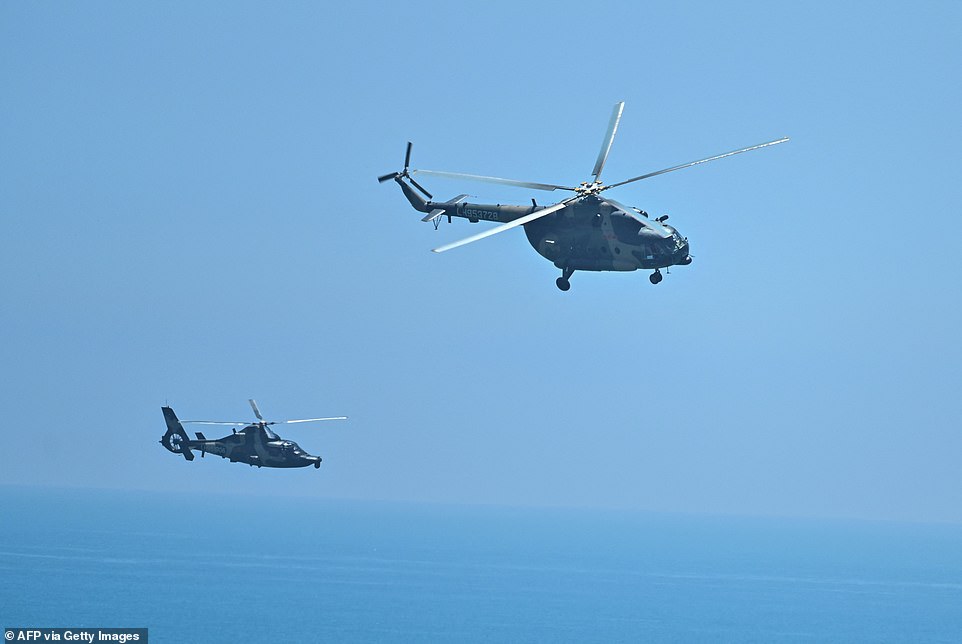 A Chinese military helicopter flies past Pingtan Island, one of mainland China’s closes points to Taiwan. The Asian country has started ‘live-firing’ war games in the waters around Taiwan today 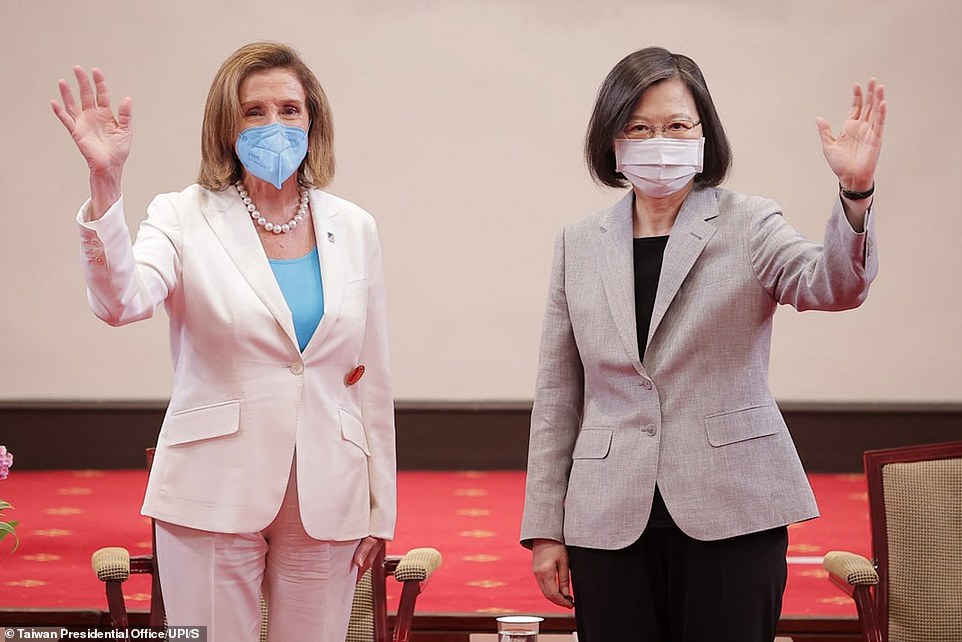 Nancy Pelosi speaks alongside Taiwan President Tsai Ing-wen in Taipei on Wednesday, during which she said America’s commitment to preserving democracy on the island is ‘ironclad’ 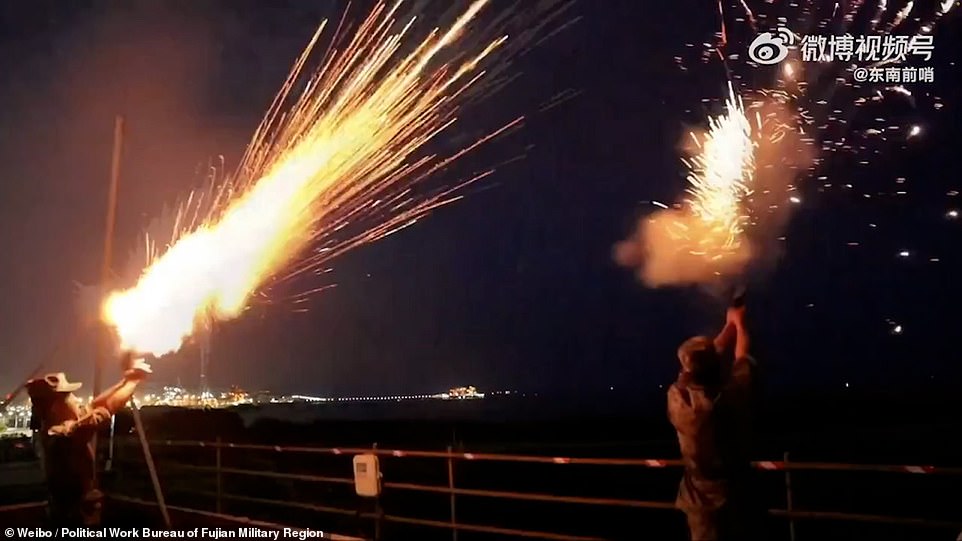 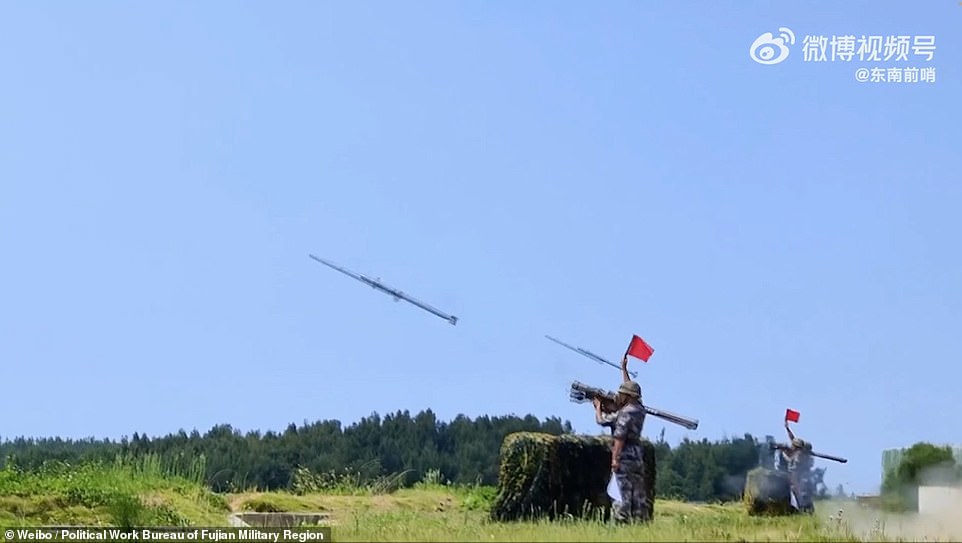 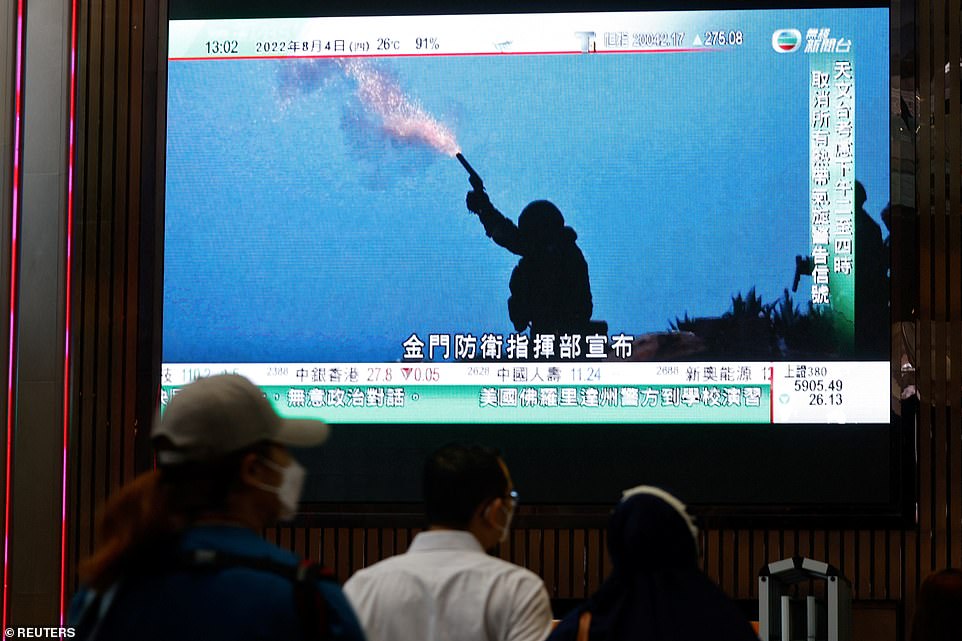 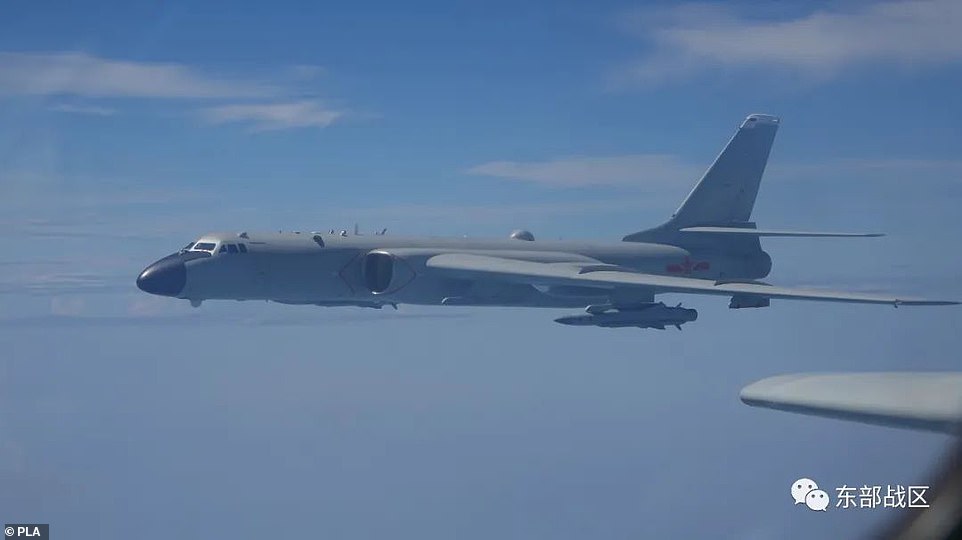 A Xian H-6 Chinese bomber jet takes part in military drills in the skies near Taiwan yesterday, as Beijing puts on an unprecedented show of force after Nancy Pelosi visited the island 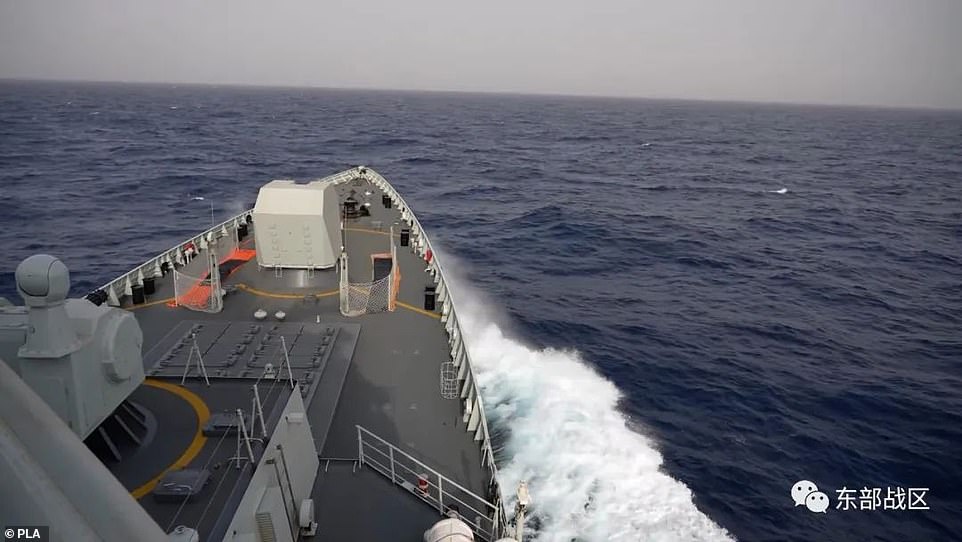 The view from the deck of a Chinese missile destroyer taking part in military drills in the Taiwan Strait yesterday, as Beijing menaces its democratic neighbour

Nearly half the world’s ships passed through the narrow Taiwan Strait – which separates the island from the Chinese mainland  – in the first seven months of this year, according to data compiled by Bloomberg.

The dramatic escalation in tensions was sparked by Pelosi’s visit earlier this week as she became the highest-profile elected US official to visit Taiwan in 25 years.

She said her presence made it ‘unequivocally clear’ that the United States would ‘not abandon’ a democratic ally like Taiwan.

The exercises, which began around 12pm (4am GMT), involve ‘live-firing’, according to state media.

‘Six major areas around the island have been selected for this actual combat exercise and during this period, relevant ships and aircraft should not enter the relevant waters and airspaces,’ state broadcaster CCTV reported.

The exercises will take place in multiple zones around Taiwan – at some points within just 20 kilometres (12 miles) of the island’s shore – and will conclude at midday on Sunday.

Taiwan’s defence ministry said it was closely watching the drills and that the island was prepared for conflict, but would not seek it. 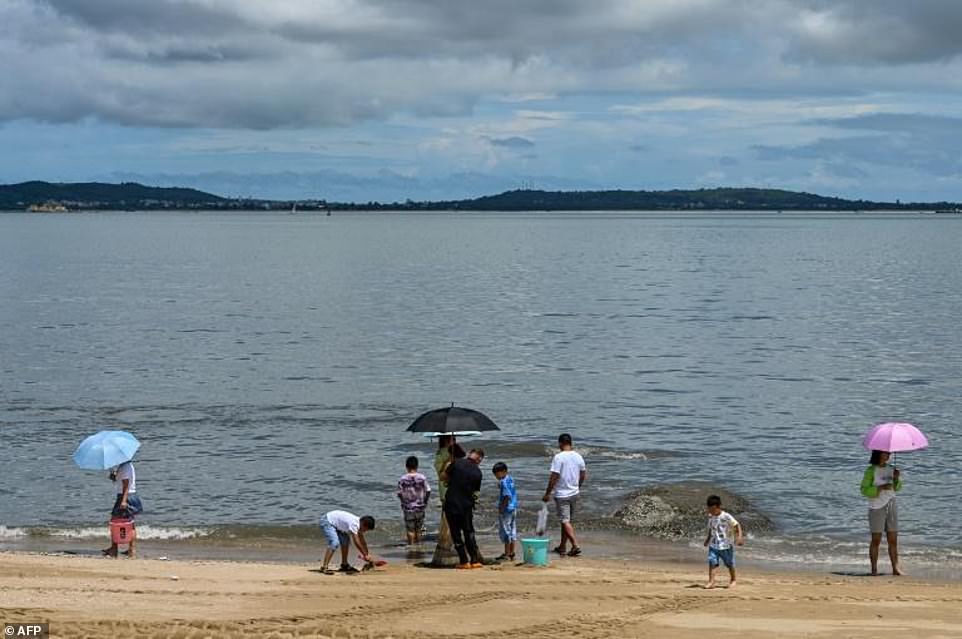 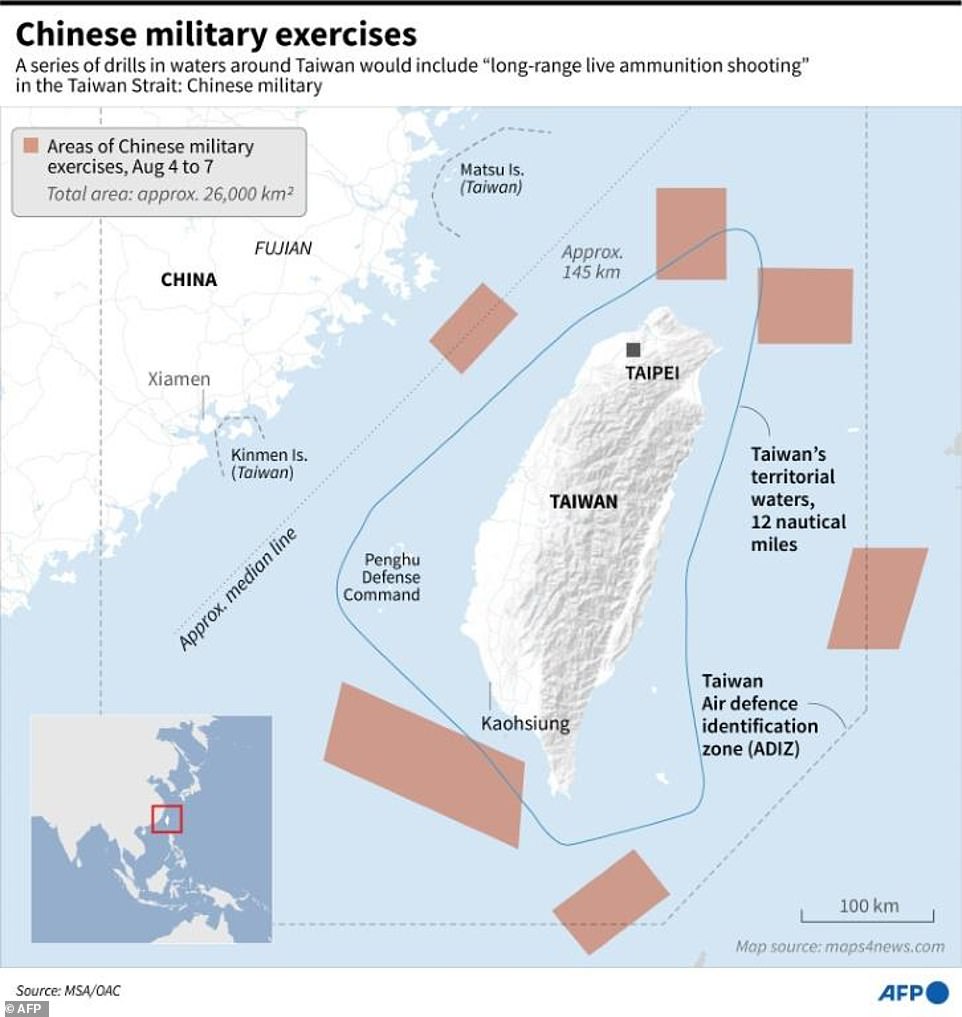 The Chinese military has encircled the island, with some training exercises taking place within Taiwan’s territorial waters

Nancy Pelosi has accused China of ‘standing in the way’ of Taiwan’s participation in international affairs and cautioned that America’s commitment to preserving democracy ‘remains ironclad’.

Pelosi also met with Taiwan’s female president Tsai Ing-wen – telling her that the controversial visit shows the US ‘will not abandon its commitment’ to the island.

The Democrat specifically called out China, whose leaders warned the trip was pushing Taiwan into a ‘disastrous abyss,’ by telling reporters: ‘They didn’t say anything when the men came.’

Pelosi criticized Beijing for preventing Taiwan from ‘participating and going to certain meetings’ but noted the government would ‘not stand in the way of people coming to Taiwan.’

China furiously condemned the visit as Pelosi hailed self-ruled Taiwan as ‘one of the freest societies in the world’ in her speech to the parliament in Taipei.

‘The Ministry of National Defence stresses that it will uphold the principle of preparing for war without seeking war, and with an attitude of not escalating conflict and causing disputes,’ it said in a statement.

Beijing’s nationalist state-run tabloid Global Times said, citing military analysts, that the exercises were ‘unprecedented’ and that missiles would fly over Taiwan for the first time.

‘This is the first time the PLA will launch live long-range artillery across’ the Taiwan Strait, the newspaper said using the Chinese military’s formal name, the People’s Liberation Army.

Taiwan has described the exercises as ‘an irrational move to challenge the international order’.

The Group of Seven industrialised nations also condemned the drills, saying in a statement there was ‘no justification to use a visit as pretext for aggressive military activity in the Taiwan Strait’.

Taiwan’s Maritime and Port Bureau issued warnings on Wednesday to ships to avoid the areas being used for the Chinese drills.

Even a small disruption in global supply chains, already battered by the Covid-19 pandemic and Russia’s invasion of Ukraine, could prove costly.

‘The shutting down of these transport routes – even temporarily – has consequences not only for Taiwan, but also trade flows tied to Japan and South Korea.’

But several shipping companies contacted by AFP said they were waiting to see the impact of the drills before rerouting.

The ongoing typhoon season made it riskier to divert ships around the eastern coast of Taiwan through the Philippine Sea, some added.

Others said they would stick to their schedules.

‘We don’t see any impact during (this) period and we don’t have any plan on re-routing our vessels,’ said Bonnie Huang, a spokesman for Maersk China.

The drills have also hit air routes. Over the last two days, more than 400 flights were cancelled at major airports in Fujian, the Chinese province closest to Taiwan, signalling that the airspace could be used by the military.

Beijing has defended its military operations as ‘necessary and just’, pinning the blame for the escalation on the United States and its allies.

A Chinese military source also told AFP the exercises would be staged ‘in preparation for actual combat’.

‘If the Taiwanese forces come into contact with the PLA on purpose and accidentally fire a gun, the PLA will take stern countermeasures, and all the consequences will be borne by the Taiwanese side,’ the source said.

Taiwan’s 23 million people have long lived with the possibility of an invasion, but that threat has intensified under President Xi Jinping, China’s most assertive ruler in a generation. 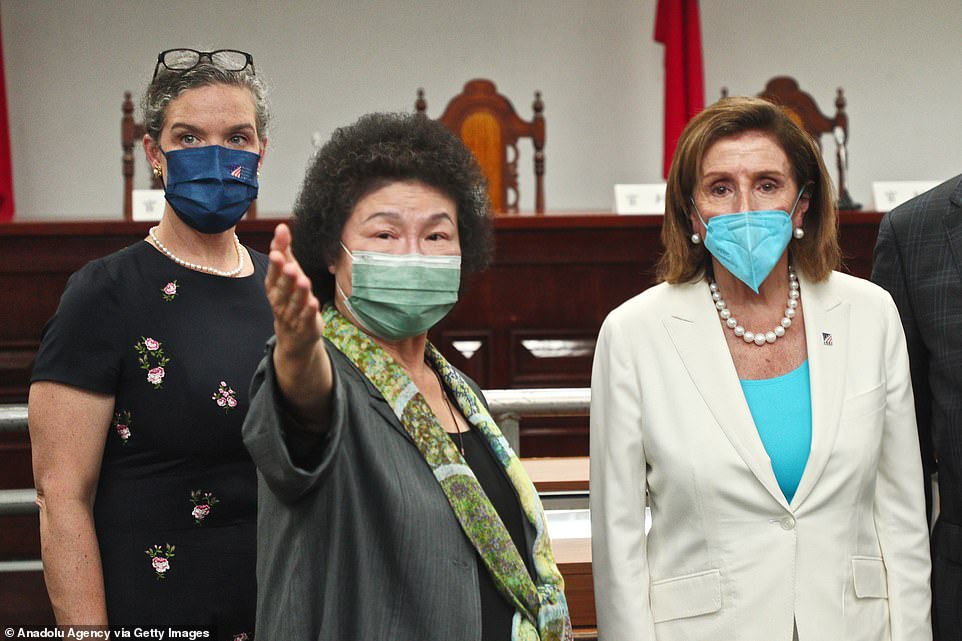 The increased tensions come after a visit by senior US politician Nancy Pelosi to Taiwan earlier this week. Here she is pictured with Taiwanese President Tsai Ing-wen yesterday 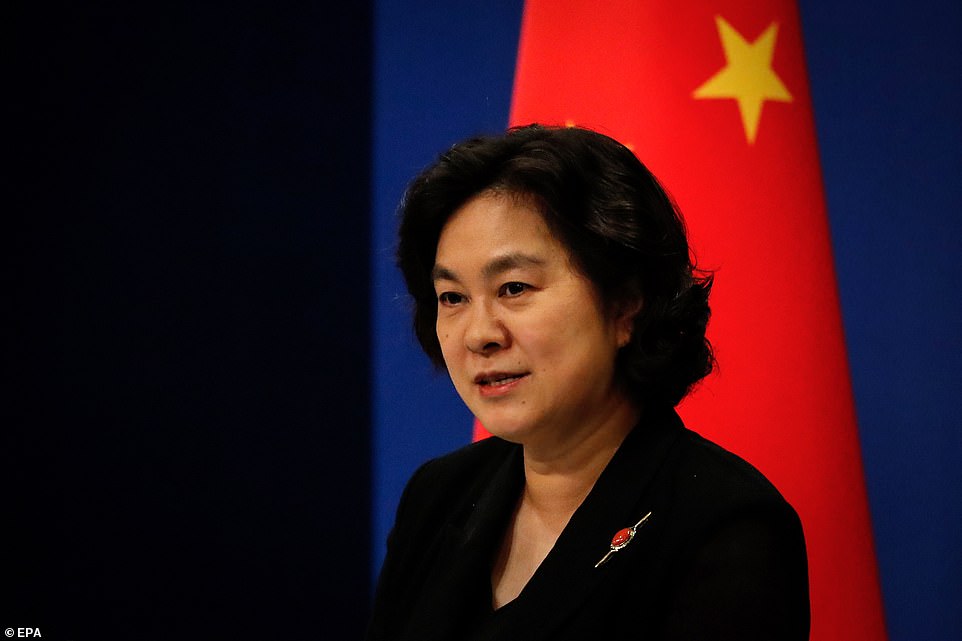 Chinese foreign ministry spokeswoman Hua Chunying told a press conference yesterday that ‘the United States are the provocateurs, China is the victim’

China has reacted with fury to US Speaker Nancy Pelosi’s controversial trip to Taiwan that has inflamed tensions between the two superpowers.

China’s foreign minister, Wang Yi, branded the trip a ‘complete farce’ and repeated the much-used phrase by Chinese diplomacy that ‘those who play with fire will perish by it.’

Last week Chinese premier Xi Jinping had used the same expression in a phone call to US President Joe Biden.

Early on Wednesday, the Chinese foreign ministry slammed Pelosi for ‘brazenly’ going ahead with the trip that was still unconfirmed as late as Monday, claiming it ‘maliciously infringes on China’s sovereignty and blatantly engages in political provocations.’

‘It proves once again that some US politicians have become ‘troublemakers’ of China-US relations,’ the statement said.

And late Tuesday night, after Pelosi’s arrival, the Chinese Deputy Foreign Minister summoned the US Ambassador to China, Nicholas Burns, to protest the visit.

Just 130 km wide at its narrowest point, the Taiwan Strait is a major international shipping channel and all that lies between democratic Taiwan and its giant authoritarian neighbour.

It is now a flashpoint between the United States, Taiwan and a Chinese leadership keen to project strength ahead of a crucial ruling party meeting this autumn at which Xi is expected to be given an unprecedented third term.

‘China’s announced military exercises represent a clear escalation from the existing baseline of Chinese military activities around Taiwan and from the last Taiwan Strait Crisis in 1995-1996,’ said Amanda Hsiao, senior analyst for China at the International Crisis Group.

‘Beijing is signalling that it rejects Taiwan’s sovereignty.’

Nevertheless, analysts have told AFP that China is not aiming to escalate the situation beyond its control – at least for now.

‘Clearly they recognise that there are some limits to what they are willing to do,’ Chong Ja Ian, an associate professor at the National University of Singapore, told AFP.

And Titus Chen, an associate professor of political science at the National Sun Yat-Sen University in Taiwan, said: ‘The last thing Xi wants is an accidental war.’

Matthew Henderson, associate fellow at the Council on Geostrategy, told MailOnline: ‘Xi has made so-called ‘re-unification’ with Taiwan his chosen cause and hoped-for legacy as China’s greatest leader since Mao.

‘It would be as well to assume that in the run-up to the Party Congress, when he intends to secure permanent autocracy, Xi will be willing to take significantly greater risks than [Chinese governments of the past.]’

While the risk of immediate conflict around Taiwan is low, Mr Henderson added that ‘it would be an error to assume that the Xi regime is able to hold back from disastrous adventurism when it has painted itself into such a corner over the right to ‘reunite’ with Taiwan, whose people want nothing of the kind and which the liberal world must not allow.’

He continued: ‘Xi is already using the whole gamut of coercive state powers- including hostile military activity, to try to erode Taiwanese resolve and that of Taiwan’s supporters.

‘Xi could bring down the Taiwanese government by blockading the island which depends heavily on imported food and other staples. But confidence and resilience is growing, and Xi will not welcome this.

‘We should not rule out the possibility of sudden, devastating missile attacks on the central government that would bring a rapid collapse of resistance. Then the rest of the world could protest and sanction to no avail.

‘Xi could, if he felt compelled to do so by threats to his personal authority, authorise such an assault at very little notice indeed. He may be counting in this as an element in his current campaign of bluff and coercive pressures on a global front.

‘There is still time for the concerted energies of the free world to make it clear to Xi that his agenda to annexe Taiwan and impose unaccountable totalitarian rule on 23 million citizens of a vibrant democracy will never be allowed to succeed.’