Canada has revealed proposed legislation to force the likes of Facebook and Google to pay news publishers for their content and negotiate commercial deals.

The ‘Online News Act’ would mean tech giants must make fair commercial deals with Canadian outlets for the news shared on their platforms or face binding arbitration.

If such deals do not meet a set of criteria set out in the act, the platforms would have to go through mandatory bargaining and arbitration processes overseen by the Canadian Radio-television and Telecommunications Commission (CRTC) regulator.

The move comes after more than 450 news outlets have closed in Canada since 2008 – including 64 in the past two years, as digital platforms exploit their news content.

The legislation would put Canada in step with a major law passed by Australia last year to protect news providers against Big Tech, which dominates online advertising. 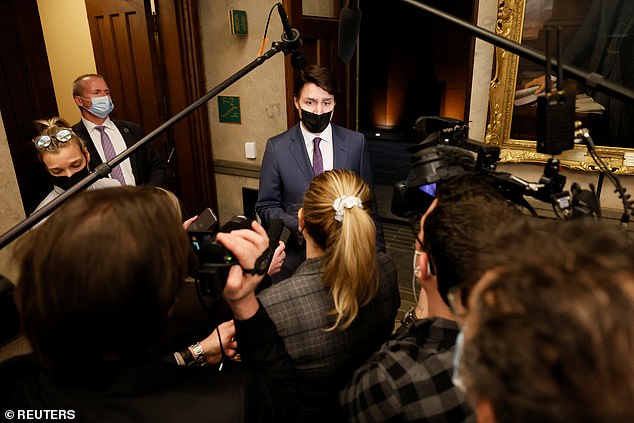 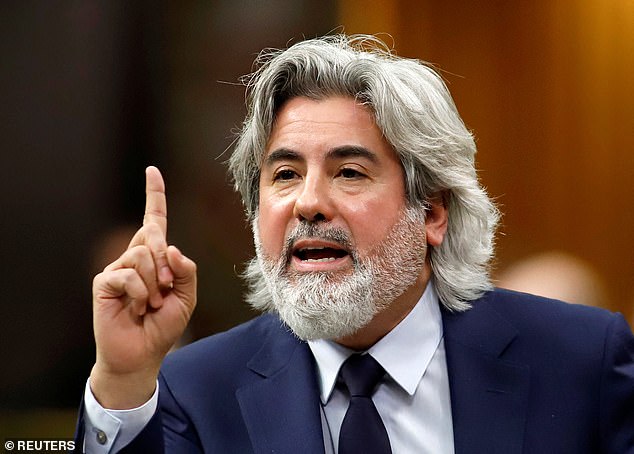 Canada’s Online News Act is now expected to be passed into law by Prime Minister Justin Trudeau’s Liberal government with backing from a small leftist faction.

The country’s Heritage Minister Pablo Rodriguez told a press conference yesterday: ‘The news sector in Canada is in crisis and this contributes to the heightened public mistrust and the rise of harmful disinformation in our society.’

Facebook and Google would be forced to pay UK newspapers and other media outlets for using their stories under new laws being considered by Nadine Dorries.

The Culture Secretary’s plans would encourage tech firms to negotiate payments, with an independent arbitrator stepping in to set a fair price if talks fail.

The payment regime would be regulated by the Digital Markets Unit (DMU), a watchdog set up within the Competition and Markets Authority to rein in the power of the tech giants.

But the DMU can’t act until it is supported by legislation passed by Parliament.

Miss Dorries has told officials in her department that the DMU should have ‘robust’ powers, The Mail On Sunday reported in January.

She later said in an interview for the Sunday Times in February that she wanted to make sure that news organisations that offer articles to the public for free still exist in a decade’s time, saying: ‘I saw the pervasiveness of big tech when I was in health, and I see what it’s doing to our democracy and our press from this department.’

He noted that billions of dollars in advertising revenues that once fed newsrooms across Canada now go mostly to Facebook and Google.

Canada’s publishers have pressed against Facebook and urged the country’s government to bring in more regulation of tech companies.

The news media want the industry to be able to recoup financial losses they have suffered in the years that Facebook and Google have been steadily gaining greater market shares of advertising.

The legislation would cover news businesses operating in Canada, including newspapers and news magazines with a digital presence, and allow them to bargain individually as well as in groups.

Mr Rodriguez said the Canadian government had held discussions with both firms, adding: ‘They were open to regulations … those conversations were very frank, honest and nice.’

The Canadian law would work similarly to the one in Australia introduced in February last year, which made it mandatory for Google and Facebook to pay media companies for content on their platforms

Australia’s New Media Bargaining Code, which was a world first, was a reform that has been heralded as a model for others around the world to copy.

Australian regulators had also accused the companies of draining cash away from traditional news organisations while using their content for free.

Big Tech firms had fiercely opposed the Australian legislation initially, fearing it would threaten their business models, but with amendments it was easily passed in the country’s Parliament.

The law came in after Facebook blacked out all media in the country, stripping the pages of domestic and foreign news outlets for Australians and blocking its users from sharing any news content.

Elsewhere, in November 2021, Google signed agreements with French newspapers to pay for their content, after a European Union law on ‘neighbouring rights’ was introduced in 2019.

The Paris-based news agency Agence France-Presse (AFP) signed a five-year content agreement with Google at the end of last year, as well as two commercial contracts. 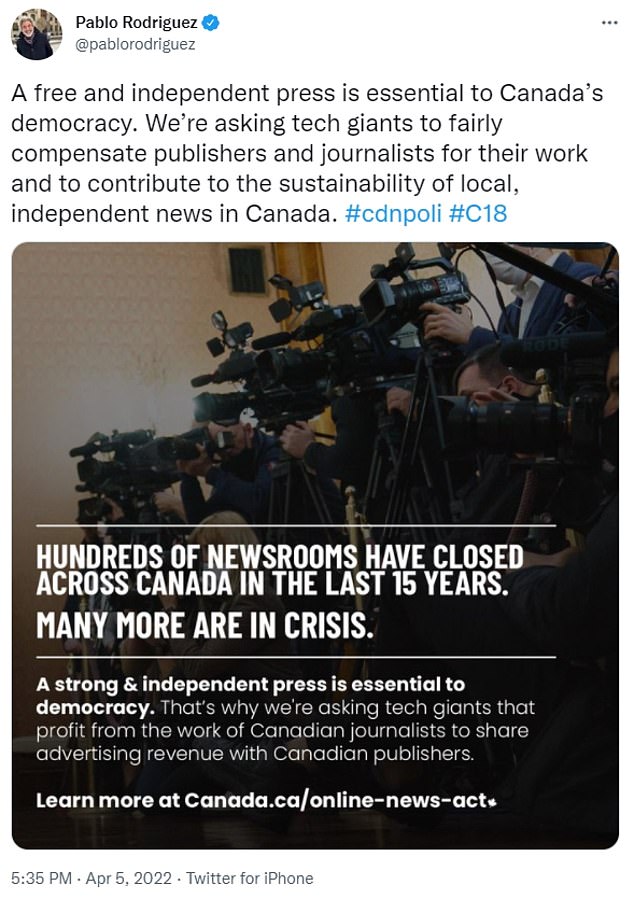 Mr Rodriguez tweeted about the Online News Act (pictured). He noted that billions of dollars in ad revenues that once fed newsrooms across Canada now go mostly to Facebook and Google 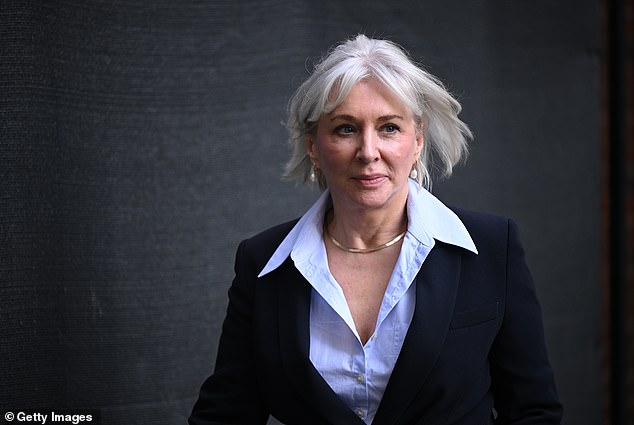 Facebook and Google would also be forced to pay UK newspapers and other media for using their stories, under new laws being considered by Culture Secretary Nadine Dorries (pictured)

Google and Facebook took about four­-fifths of the £14billion spent in 2019 on digital advertising in the UK, while national and local newspapers took less than 4 per cent.

Rachel Curran, public policy manager for Facebook’s owner Meta, said today: ‘We are currently reviewing the proposed legislation in detail and look forward to engaging with stakeholders once we more fully understand what the bill entails.’

Facebook believes that global news media which use its platform choose to do so because of its value, in that the tools and access to potential readers are free.

The company also feels that it connects publishers with wider communities than they might not reach on their own and this can help them drive more revenue, either from generating new subscriptions or selling more adverts from referral traffic.

Facebook and Google have voluntarily agreed to invest around £600million each over three years on journalism initiatives globally.

Facebook has also signed commercial deals with 18 news publishers in Canada as part of its ‘news innovation test’ in which it pays media for the ability to link to additional news stories not already posted on Facebook.