Bangkok: A small Buddhist temple in northern Thailand has been left without monks after the entire monastery was found to have been using methamphetamine, according to local officials.

Following orders to investigate drug use in Phetchabun province, the local sheriff and village headman in Bung Sam Phan subdistrict, some 240 kilometres north of Bangkok, poked around schools, factories and temples searching for drug addicts and dealers so they could be sent for rehabilitation.

“As a community leader, I was frightened because I never thought the monks would be addicted to drugs,” said Sungyut Namburi, the village headman. “I never thought that drugs would spread to temples.” 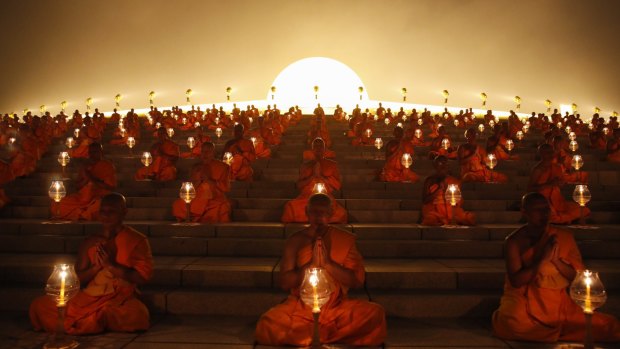 Thousands of Thai Buddhist monks chant during lantern lighting to celebrate Makha Bucha day, at the Wat Phra Dhammakaya Temple in Pathum Thani province, on the outskirts of Bangkok.Credit:EPA

Monks are revered figures in Thai culture. in Bangkok’s metro system, seats are reserved for them alongside pregnant and elderly individuals. Particularly in rural areas outside of Bangkok, monks are trusted advisers, often serving as counsellors and role models to the community.

So it was much to Sungyut’s surprise that all four monks in one small temple tested positive for methamphetamine use when he and the sheriff paid a visit to the monastery on Friday. At another small temple, two monks tested positive, he said.

But the writing was on the wall: the monks’ personality and behaviour gave them away as drug users, Sungyut said. Some villagers had tipped him off, telling him to check on temples in the community.

Even the abbot – the head of the monastery, who had served as a monk for 10 years – was found to be using drugs. “When I inspected the abbot’s shelter, I was stunned because it was a mess,” Sungyut said. After the drug tests came back positive, he said, the monks confessed to using drugs. Some of them admitted to being longtime addicts.

The scandal in Phetchabun province comes amid a nationwide crackdown on drugs following a mass killing at a daycare centre in October that left 38 dead, most of them children. The suspect, an ex-police officer, was reported to have been dismissed from the force for methamphetamine possession.

Niti Rungjaruenkij, head of the subdistrict’s administration, said the drug users in the community – including the ex-monks – were enrolled in rehabilitation on Wednesday. Sungyut noted that the monks had to leave the monkhood first, as having a monk in rehab would be “inappropriate”, he said. After they are clean from drugs, he said, they can become a monk again if they choose to do so.

But for now, “the temple is empty” without the monks, Sungyut said. He and the sheriff have discussed inviting a “good monk” from elsewhere to fill in. A few monks who heard about the scandal had also offered to stay at the temple to support the community in the interim, he said.

At first, the revelations shocked the community, Sungyut said, causing him to fear that people may lose faith. “It was very difficult for villagers” when they learnt of the monks’ transgressions, he said, but they later thanked him for his efforts.

After all, “they are misbehaving monks,” he said, “and they should leave the monkhood if they can’t follow and practise the disciplines.“